Naturally, the same people who would froth and rage over the Cake Shop case think it’s perfectly fine to do this.

Interesting how people are calling same-sex wedding cake the ‘Rosa Parks’ issue of the day, while actual groups of people are being thrown out of coffee shops for their beliefs.

Heroic, and ‘Anti-LGBTQ’. Interesting… one might be led to believe they were dragging gays behind pickup trucks, right? Nope. Not even close.

How was that same event described by a more conventional news source?
“Gay coffee shop owner kicks Christians out of his cafe over ‘offensive’ anti-abortion leaflet”

So the real story is that Pro-life Christians are a group that some people — including the ‘tolerance’ crowd — claim they have a legitimate right to discriminate against. How ‘tolerant’ of them.

You can also add political affiliation to that list. The same people who think they have a right to steal MAGA hats and ‘report’ the people wearing them are still at it.

Here is the tirade that paying customers who happened to buy coffee on campus endured because they happened to be openly Republican. And that somehow violates a safe space policy.

They were given an ultimatum that they had 5 Minutes to leave Rodrigues.

Of course, there is the small detail that they were told this AFTER they ordered and paid for their coffee.

“I don’t want people like you supporting this club… no one here wants people like you supporting our club,” the president retorted. “I am giving you five minutes.”
A student then asked for a refund, to which the president responded, “[y]ou had some coffee… do not try to outsmart me.”
…“You are threatening the integrity of our club. This is a community standard—you are wearing hats that completely violate safe space policy,” she said. “You have to take it off or you have to go.”

As Campus Reform reports:
A glowing 2013 profile in The Fordham Ram begins by declaring that Rodrigue’s is “open to all,” even reiterating that the shop “is the only on-campus club that provides a daily, tangible service to all members of the Fordham community through low-priced, organic and Fair-Trade coffee drinks as well as an open community space.” 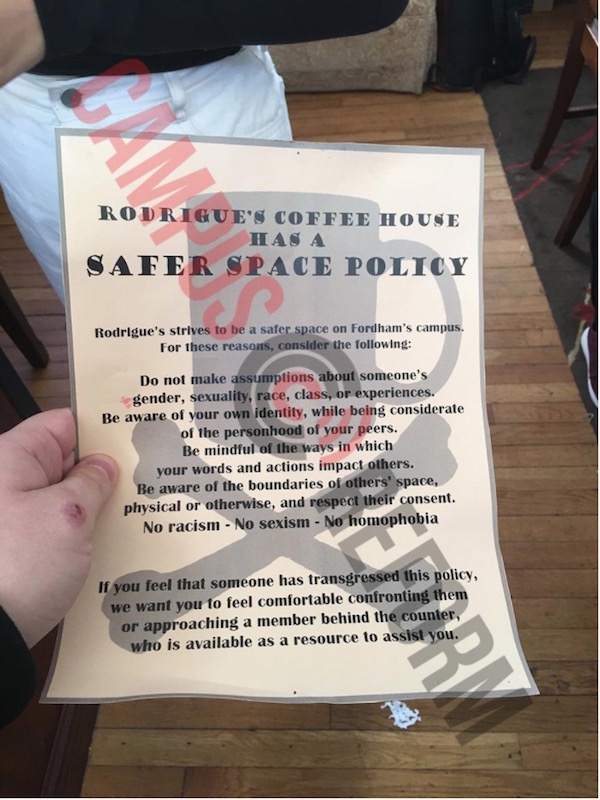 Has nobody figured out yet that extremist views like these have already hammered enrollment levels in some of the more egregious crackpot universities?

There is no inherent right to ‘not be offended’. Not in real life.