Arrogant and ignorant chick got offended. So, like any good bigot, she demanded Rowe be silenced.

She wasn’t even smart enough to understand how wrong she was.

Mike Rowe has a rich history of hosting great television shows. And because his interests and his foundation draw from people on both side of the political aisle, he is not an overtly political person. Although, to be sure, his attitudes toward hard work and accountability certainly resonate with those of us on the right.

We mention this because he was denounced as ‘ultra-right’.

Rowe was hosting a show on the Science Channel’s ‘How The Universe Works’.

For those of you who are familiar with Rowe’s work, he is a natural storyteller and has a knack for digging up research that both entertains and informs his hearers.

He brought the same approach to this program, as well.

Here is the criticism leveled at him:

“I love the show How the Universe Works, but I’m lost on how the producers and the Science Channel can allow anti-education, science doubting, ultra-right wing conservative Mike Rowe to narrate the show,” wrote Bright, on social media. “There are countless scientists that should be hired for that, or actors, if you must, that believe in education and science that would sound great narrating the show, example: Morgan Freeman. Cancel this fools contract and get any of your scientists so often on the show to narrate it.”

If any of you found yourselves sympathizing with, or even agreeing with her statements, you’ll want to buckle up.

What she took as him being critical of science was actually him APPLYING the scientific method and questioning our assumptions, seeking better data, and updating our knowledge.

The topic he was discussing was ‘Black Holes’. And she didn’t appreciate his honesty about emerging scientific doubts about their existence.

Here is Mike Rowe’s reply in full, as taken from his Facebook page. (The breaks are for formatting only.)

We are happy to include it in full because Mr Rowe, as always, offers us a textbook example of how we can engage a toxic snowflake with both intelligence and grace.

First of all, I’m glad you like the show. “How the Universe Works” is a terrific documentary series that I’ve had the pleasure of narrating for the last six seasons. I thought this week’s premiere was especially good. It was called, “Are Black Holes Real?” If you didn’t see it, spoiler alert….no one knows!!!

It’s true. The existence of Black Holes has never been proven. Some cosmologists are now convinced they don’t exist at all, and the race to prove their actuality has become pretty intense. Why? Because so much of what we think we know about the cosmos depends upon them. In other words, the most popular explanations as to how the universe actually works, are based upon the existence of a thing that no one has been able to prove.

As I’m sure you know, it’s OK to make assumptions based on theories. In fact, it’s critical to progress. But it’s easy these days to confuse theory with fact. Thanks to countless movies and television shows that feature Black Holes as a plot device, and many documentaries that bring them to life with gorgeous CGI effects and dramatic music, a lot of people are under the assumption that Black Holes are every bit as real as the Sun and the Moon. Well, maybe they are, and maybe they aren’t. We just don’t know. That’s why I enjoyed this week’s show so much. It acknowledged the reasons we should question the existence of something that many assume to be “settled science.” It invited us to doubt.

Oftentimes, on programs like these, I’m asked to re-record a passage that’s suddenly rendered inaccurate by the advent of new information. Sometimes, over the course of just a few days. That’s how fast the information changes. Last year for instance, on an episode called “Galaxies,” the original script – carefully vetted by the best minds in physics – claimed there were approximately one hundred billion galaxies in the known universe. A hundred billion! (Not a typo.) I couldn’t believe it when I read it. I mean, the Milky Way alone has something like 400 billion stars! Andromeda has a trillion! How many stars must there be in a universe, with a hundred billion galaxies? Mind-boggling, right?

Well, a few weeks later, the best minds in physics came together again, and determined that the total number of galaxies in the universe was NOT in fact, a hundred billion. They were off. Not by a few thousand, or a few million, or few billion, or even a few hundred billion. The were off by two trillion. That’s right…TWO TRILLION!! http://bit.ly/2jB0Nq7 But here’s the point, Rebecca – when I narrate this program, it doesn’t matter if I’m correct or incorrect – I always sound the same. And guess what? So do the experts.

When I wrote about this discrepancy, people became upset. They thought I was making fun of science. They thought I was suggesting that because physicists were off by one trillion, nine hundred billion galaxies, all science was suddenly suspect, and no claims could be trusted. In general, people like you accused me of “doubting science.” Which is a curious accusation, since science without doubt isn’t science at all.

This is an important point. If I said I was skeptical that a supernatural being put us here on Earth, you’d be justified in calling me a “doubter of religion.” But if I said I was skeptical that manmade global warming was going to melt the icecaps, that doesn’t make me a “doubter of science.” Once upon a time, the best minds in science told us the Sun revolved around the Earth. They also told us the Earth was flat, and that a really bad fever could be cured by blood-letting. Happily, those beliefs were questioned by skeptical minds, and we moved forward. Science is a wonderful thing, and a critical thing. But without doubt, science doesn’t advance. Without skepticism, we have no reason to challenge the status quo. Anyway, enough pontificating. Let’s consider for a moment, your very best efforts to have me fired.

You’ve called me an “ultra-right wing conservative,” who is both “anti-education,” and “science-doubting.” Interestingly, you offer no proof. Odd, for a lover of science. So I challenge you to do so now. Please provide some evidence that I am in fact the person you’ve described. And by evidence, I don’t mean a sentence taken out of context, or a meme that appeared in your newsfeed, or a photo of me standing next to a politician or a talk-show host you don’t like. I mean actual proof of what you claim I am.

Also, please bear in mind that questioning the cost of a college degree does not make me “anti-education.” Questioning the existence of dark-matter does not make me a “dark-matter denier.” And questioning the wisdom of a universal $15 minimum wage doesn’t make me an “ultra-right wing conservative.” As for Morgan Freeman, I agree. He’s a terrific narrator, and a worthy replacement. But remember, Morgan played God on the big screen. Twice. Moreover, he has publicly claimed to be a “believer.” (gasp!) Should this disqualify him from narrating a series that contradicts the Bible at every turn? If not, why not?

Anyway, Rebecca, my beef with your post comes down to this – if you go to my boss and ask her to fire me because you can’t stand the sound of my voice, I get it. Narrators with unpleasant voices should probably look for other work anyway, and if enough people share your view, no hard feelings – I’ll make room for Morgan. But if you’re trying to get me fired simply because you don’t like my worldview, well then, I’m going to fight back. Partly because I like my job, and partly because you’re wrong about your assumptions, but mostly because your tactics typify a toxic blend of laziness and group-think that are all too common today – a hot mess of hashtags and intolerance that deepen the chasm currently dividing our country.

Re-read your own post, and think about your actual position. You’ve publicly asked a network to fire the narrator of a hit show because you might not share his personal beliefs. Don’t you think that’s kind of…extraordinary? Not only are you unwilling to engage with someone you disagree with – you can’t even enjoy a show you claim to love if you suspect the narrator might not share your view of the world! Do you know how insular that makes you sound? How fragile?

I just visited your page, and read your own description of you. It was revealing. It says, “I stand my ground. I fear no one & nothing. I have & will fight for what’s right.”

Maybe I’m missing something, but I don’t think the ground you’re standing on is worth defending. If you truly fear “no one & nothing,” it’s not because you’re brave; it’s because you’re unwilling to expose yourself to ideas that frighten you. And while I can see that you like to fight for what you think is “right” (in this case, getting people fired that you disagree with,) one could easily say the same thing about any other misguided, garden-variety bully.

In other words, Rebecca, I don’t think you give a damn about science. If I’m wrong, prove it. Take a step back and be skeptical about your own assumptions. Take a moment to doubt your own words, and ask yourself – as any good scientist would – if you’ve got your head up a black hole.

Having said all that, I think you’re gonna love next week’s episode. It’s called Multiple Stars! Check it out, Tuesdays at 10pm, on Science.

Mr. Rowe is nothing but grace and class.

We, on the other hand, are little more snarky. Which is why we’d taunt a chick like her with a shirt like this.

Women are great. Just like our very own President Trump says, we like all women except Rosie O’Donnell and her feminist pals.
How do you confuse a feminist? (Tell her she can’t make you a sandwich!) 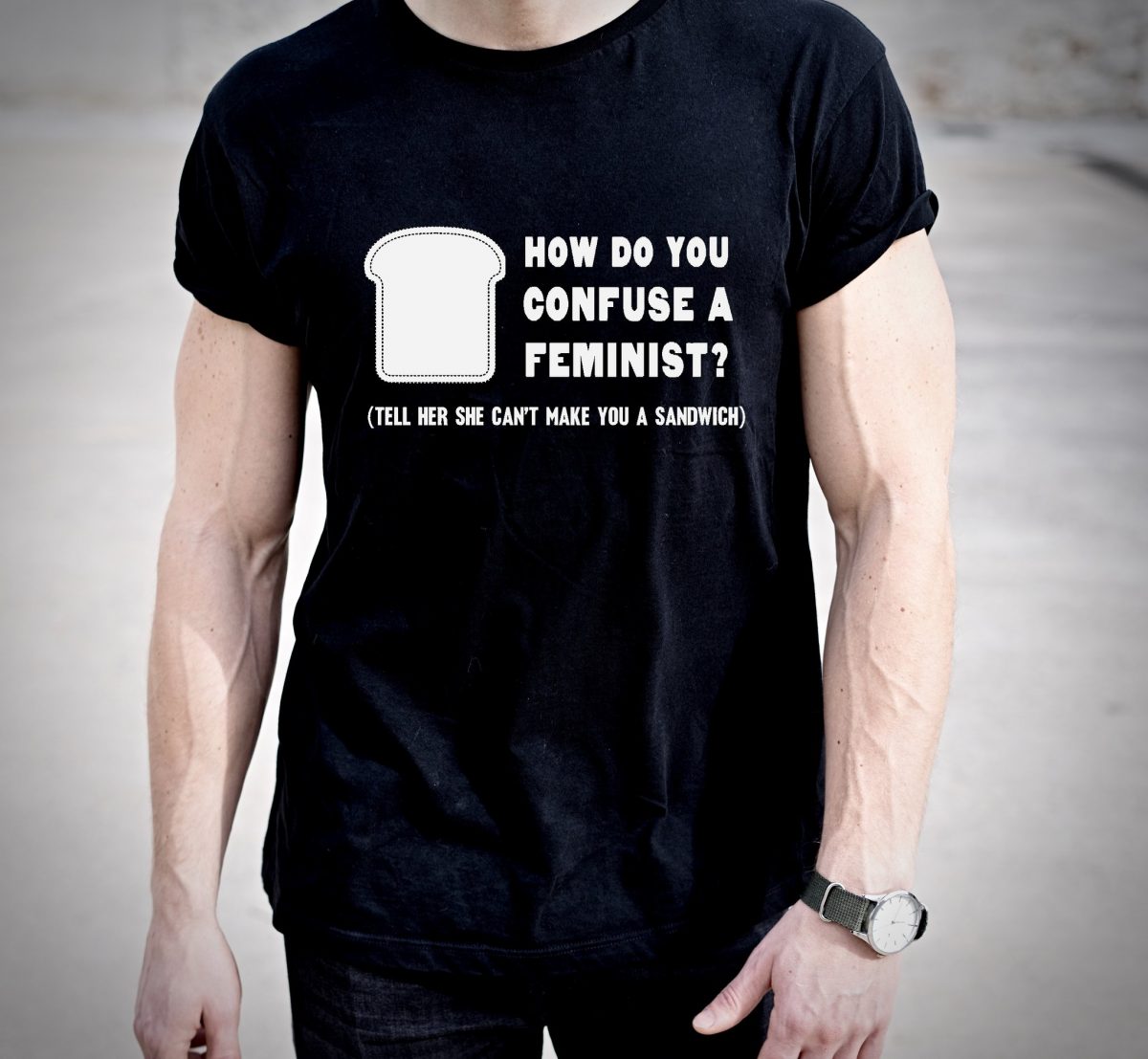 El Salvador’s President Claims ‘Most of the World’s Leaders’ are Taking Hydroxychloroquine to Fend Off COVID-19
May 28th, 2020 Big League Politics

Kathy Griffin Tries To Destroy The Tiny Piece Of Career She Has Left
May 27th, 2020 The Lid