With braniacs like this in charge on their side, it’s no wonder they’ve had so many leaks and hacks.

Remember THIS is the Democrats’ ranking member for the House Permanent Select Committee on Intelligence.

The Democrats DARE challenge the qualifications of Nunes or Dowdy when they’ve got THIS guy representing them?

This is the same guy, who only last month told us that ‘evidence of Russian Collusion was damning’. He conveniently left out who was damned by them.

Now, as we go into this, remember the outrage and anger from the Left (weren’t they throwing around the word treason?) when they claimed that Russians operatives were leaking info damaging to Hillary in a ‘secret meeting’ with Donald Trump Jr.

Now watch as a member of the House Permanent Select Committee on Intelligence tries to arrange a meeting to get non-existent ‘incriminating photos’ of a sitting President… from Russian nationals posing as Ukranians.

Maybe, by damning evidence, he meant the time a couple of Russian comedians, posing as Ukranian tipsters spun an elaborate BS story about naked photos of Trump taken in Moscow, 2013.

During this call, “Parubiy,” claimed that Trump met Russian model and singer Olga Buzova while in Moscow for the 2013 Miss Universe pageant, and that the two had had a brief affair.

“She got compromising materials on Trump after their short relations,” the caller told Schiff.

“OK, and what’s the nature” of the material? Schiff asked.

“Well, there were pictures of naked Trump,” the caller said, adding that Russian President Vladimir Putin was made aware of the “images” by Ksenia Sobchak — a Russian journalist he described as “the goddaughter of Putin.”

Schiff — because he WANTED to believe the worst — got taken in by the prank.

Here’s the original reporting of the incident in the Atlantic:

On April 10, 2017, an assistant to Adam Schiff, the ranking Democrat on the House Intelligence Committee, which is investigating Donald Trump’s campaign for possible collusion with the Kremlin, patched in a long-planned call from Andriy Parubiy, the speaker of the Rada, the Ukrainian parliament. Parubiy said he had some potentially explosive information about Trump’s visit to Moscow for the Miss Universe pageant in 2013.

“I would just caution that our Russian friends may be listening to the conversation, so I wouldn’t share anything over the phone that you don’t want them to hear,” Schiff warned.

But Parubiy persisted. “In November 2013, Mr. Trump visited Moscow, he visited competition Miss Universe, and there he met with Russian journalist and celebrity Ksenia Sobchak,” he said in his heavily accented, awkward English. He explained that in addition to having ties to Putin, Sobchak is “also known as a person who provides girls for escort for oligarchs. And she met with Trump and she brought him one Russian girl, celebrity Olga Buzova.” Schiff soberly asked for clarification, and Parubiy answered directly: Sobchak, he said, is a “special agent of Russian secret service.”

Buzova “got compromising materials on Trump after their short relations,” Parubiy said. “There were pictures of naked Trump.”

Schiff betrayed no emotion. “And so Putin was made aware of the availability of the compromising material?” he asked.
Source: Atlantic

[Here’s a picture of the email that followed the phone call:] 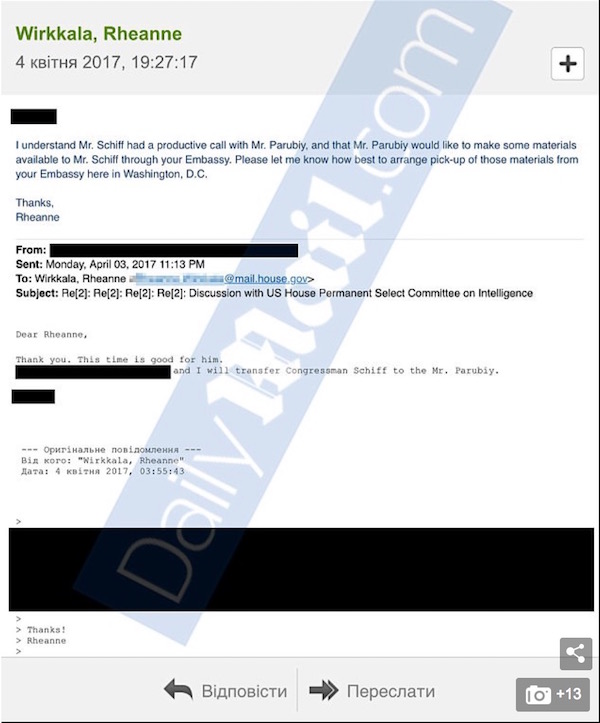 Schiff ‘betrayed no emotion’. But who here wouldn’t bet that the pencil-neck’s hands were sweaty with excitement at that point? 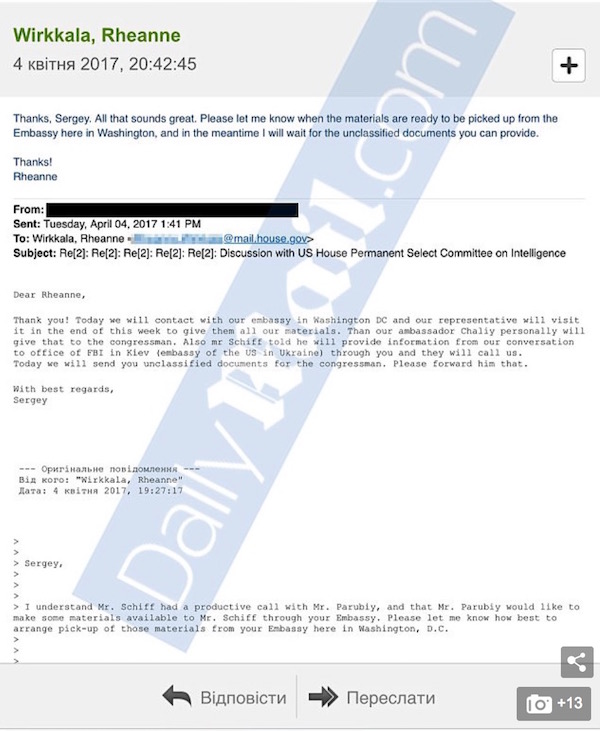 If only he knew that he was being made a laughingstock in Russia.

“Yes, of course,” Parubiy said. Putin wanted it communicated to Trump that “all those compromising materials will never be released if Trump will cancel all Russian sanctions.” The biggest bombshell: He had obtained a recording of Buzova and Sobchak talking about the kompromat while the two were visiting Ukraine. He told Schiff, “We are ready to provide [those materials] to FBI.”

Parubiy had more to say. He told Schiff about meetings that Trump’s former national-security adviser, Michael Flynn, had had with a Russian pop singer who served as an intermediary for the Kremlin. They’d met at a café in Brighton Beach, a Russian-immigrant enclave in Brooklyn, where, Parubiy said, “they used a special password before their meetings.” One would say, “Weather is good on Deribasovskaya.” The right response was “It rains again on Brighton Beach.”

“All righty. Good, this is very helpful. I appreciate it,” Schiff said. He told Parubiy that the U.S. would welcome the chance to review the evidence he had described. “We will try to work with the FBI to figure out, along with your staff, how we can obtain copies.”
Source: Atlantic

Schiff was right to be concerned about “our Russian friends” listening in, though not in the way he imagined. It wasn’t Parubiy who’d called. It was Vladimir Kuznetsov and Alexey Stolyarov, two Russian pranksters known as Vovan and Lexus. There was no kompromat, no meetings between Flynn and a Russian pop star in Brighton Beach. The call made the Americans look gullible, which suited the callers. Kuznetsov and Stolyarov immediately sent the recording to Kremlin-friendly media, which gleefully made hay of it: another dumb American, ready to believe the most-ludicrous stories about a Russia run by sneaky, evil spies. Any Russian listening to the tape would have instantly recognized how silly the conversation was. There were the B-list Russian celebrities, plus other cultural signals, like the code phrase Flynn allegedly used, which is actually the title of a classic Russian comedy.

“We wanted to talk to someone who specifically works on intelligence and give him a completely insane version of events,” Kuznetsov told me of the prank.

“We leaked him a bunch of disinformation,” Stolyarov said. “It was completely absurd.” (A spokesman for Schiff said, “Before agreeing to take the call, and immediately following it, the committee informed appropriate law-enforcement and security personnel of the conversation, and of our belief that it was probably bogus.”)
Source: Atlantic

And when exactly was this belief formed? After you realized (or had been told) that you’d been pantsed by … the Russians?

We’ve included some of the follow-up emails between Shiff’s office and the pranksters after the fact. Do they really seem to be the actions of someone who suspects a hoax?

Shiff wil be sure to mention his contact with these Russians in any official reporting, of foreign contacts, now, won’t he? We’ve seen from Flynn just how important it is not to miss anybody.

Nunes had a few things to say about Schiff being taken in by this prank, just before the same audio was played on Ingram’s show.

Clinton campaign got dirt on Trump… and so, apparently did Democrats’ ranking member for the House Permanent Select Committee on Intelligence.

Could someone explain why he was so careful to get spellings, and ask about the ‘codeword’ and get detail if he REALLY thought it was a hoax?

Notice, right at the end, how he asks if Trump also knew/used this codeword. Do you REALLY buy his claims of ‘skepticism’?

But Schiff is afraid of any harm the Nunez memo — which is a whistleblower document about possible 4th Amendment abuses — might have on national security.

How incompetent must the other Democrats be if they sent Shiff up to represent them?