He’s being scolded by the same network that said sh-t hole live on air about a gazillion times.

Remember when news sources reported about things like earthquakes and famines, statecraft and policy, or the various events — good and bad — that shape our communities, states and nation?

Who are we kidding, are any of us actually ‘olde’ enough to remember that? Or does it only exist in a legend?

As blatant as it was even back in the days when Dan Rather was busy disgracing ‘journalism’, it is now far, far worse.

The Media(D) has become bored with the LAST disgraced mud slinger they exploited in the trashing of Trump. Have you forgotten him already? Here’s a clue: 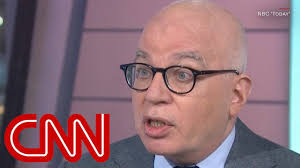 That moron wasn’t advancing their agenda at all, so they moved on looking for someone NEW to slander the President.

They found a prostitute to sling the mud for them.

It was a fitting match. Organizations that even Harvard has called out for prostituting the truth for political ends

Then they doubled down again. They found a Playboy Playmate to claim she had an affair 10+ years ago.

We call them the Media(D) because of the Deep cross-connections between the Democrat party and the news networks. Donna Brazile is just one obvious example among many. Stephanopoulos and Cuomo are two more.

Doesn’t that explain the difference in how they handle allegations from both teams?

Juanita Broadrrick claimed to be raped by Bill Clinton but wasn’t hitting him up for money, or using his name for a promotional tour, or book tour, the media was aggressively silent about the topic. Only some right-leaning news and online outlets were even willing to hear her story.

The presence of Juanita and others at the debate, with that haunted photo of Bill Clinton, wasn’t even enough for the media to talk about the issues.

Unlike Bill, Trump’s personal history was well-known long before he was ever elected. He didn’t claim to be the faithful and devoted husband. His divorces, and the circumstances around them were a matter of public record. The personal moral failings that lead to those divorces were no state secrets either.

But suddenly, with the ‘path to the Presidency’ pretty clearly closed to the Clintons the media has begun to play ‘church lady’.

The same White House that was boldly treated as a brothel by at least two of their Presidential ‘heroes’ (JFK being another one) is suddenly too high an office for a politician with ‘a past’.

The same media that winked at John Edwards when he was slutting around on his dying wife (classy guy that he was) suddenly cares about a decades-old claim of infidelity.

Maybe it has something to do with the (R) after his name.

Karen McDougal, the former Playboy Playmate who alleges she had an affair with President Donald Trump, says she was in love with the then-reality television star with whom she ‘had unprotected sex dozens of times’ after they met in 2006.

In her first television interview, McDougal told Anderson Cooper of CNN that she developed feelings for the then-Apprentice host during their 10-month relationship.

McDougal, 46, also told CNN that she and Trump had sex on their first date and that she went home afterward ‘crying in the backseat of a car’ when he offered her cash after they made love.

‘After we had been intimate, he tried to pay me, and I actually didn’t know how to take that,’ she said.
Source: DailyMail

The memorials they gave for Hugh Heffner make us think it isn’t the infidelity that offends them. It seems an attempt to destroy a politician they have been unable to own, derail or intimidate.

Given the choice, we would prefer to see integrity in our leaders. As would the Founding Fathers. But in a Democratic Republic, we choose from among the candidates that are offered.

We watched the same media chew up and spit out traditionally ‘Presidential’ men in 2008, 2012.

Not all ‘great’ leaders are a Hezekiah.

Even in the Bible, we’ve got examples of imperfect leaders who stepped up. Moses, Samson, David, Solomon, Abraham, Jacob, and ALL of Joseph’s brothers, not to mention the Apostle Paul, had some serious ‘strikes’ against them, morally. But they stepped up when called upon, and did what needed doing.

In our own history, we’ve got examples of great men — like Rev. Dr. MLK Jr. — who allegedly had his own issues with infidelity.

Does that invalidate what he did? No. It acknowledges him as complex and flawed.

The same network that smugly misnamed the Tea Party members with a homsexual slur on air has no moral high ground to attack anyone from.

If he has abused his office and power over an intern, which is called ‘sexual harrassment’, you can get back to us with that story.

America knew who their vote was a choice between. And they figured a man who everyone knew had ‘a past’ was a STILL a better choice than the corrupt, incompetent, lying harpy that rigged her own Primaries for he shot to stand against him.

America didn’t care then. Do we care now?

Dear America: Do You Care If Trump Had An Affair 12yrs Ago?