Instead of reporting the news, CNN is pushing a narrative.

But then, what did you expect from CNN?

They’ve been the propaganda arm for Democrats for years.

CNN has become the ‘All Stormy Daniels All The Time’ station. Occasionally they do take a break and try to push some ‘Russian Collusion’ for old time’s sake, but really, it’s all about the President’s sexual history.

Stormy Daniels, (real name Stephanie Clifford,) has said that business is good now that her name is out there. She’s proud that she’s a ‘successful wh*re’, is ‘one of the most successful adult movie directors in the business’, and just got a raise.

This is an alleged affair that happened 12 years ago.

Wherever you stand on the Stormy Daniels scandal — whether you think he did, didn’t, or you just don’t care — is it not possible that someone could change their behavior in 12 years?

He wasn’t running for President 12 years ago.

It’s not like he had been elected to any other office before winning the Presidency.

What happened to, ‘It’s consensual sex and it’s none of our business’?

Isn’t that what they said about Bill Clinton? 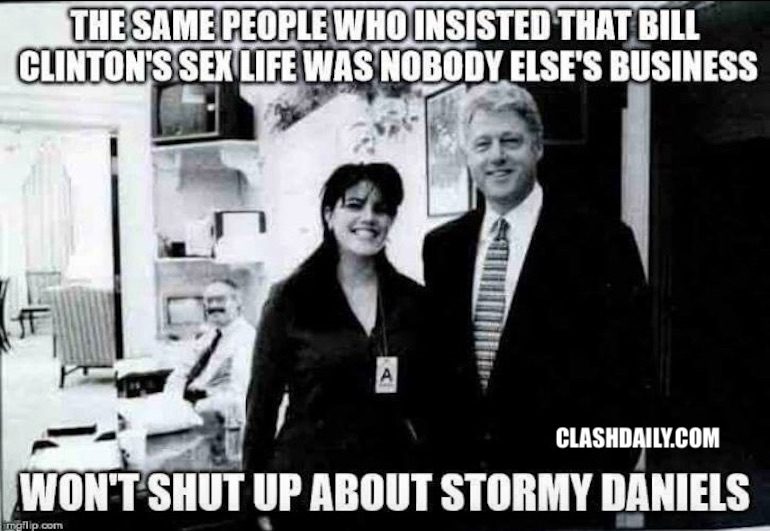 Bill Clinton, just like his leftwing buddy, Harvey Weinstein, is a poster boy for the predatory behavior.

Even Bill’s non-consensual sex was off-limits for the Media (D).

Juanita Broaddrick discusses how terrified she was to come forward because Clinton was so powerful and knew where she was at a meeting 13 years after the rape.

Watch from about the 9-minute mark:

The full interview with Broaddrick is from the 5:40 mark to the 32-minute mark.

Do you think the Media (D) will ever have an interview with Juanita like that?

Either sexual history is off limits completely or it isn’t.