Whatever happened to ‘when they go low, we go high’?

Oh right. That was every bit as much of a lie as their alleged commitment to the democratic process. (*Cough* Hillary’s Primary *cough*) Remember Hillary’s grand speeches about ‘smooth transition of power’? Or was that only for when she was assured she had a 99% chance of winning?

Just when one lying Wolff had slinked off to whatever lair he calls home, another Wolf came out at the White House Correspondents’ Dinner.

Can you guess which of these pictures is Michelle Wolf? 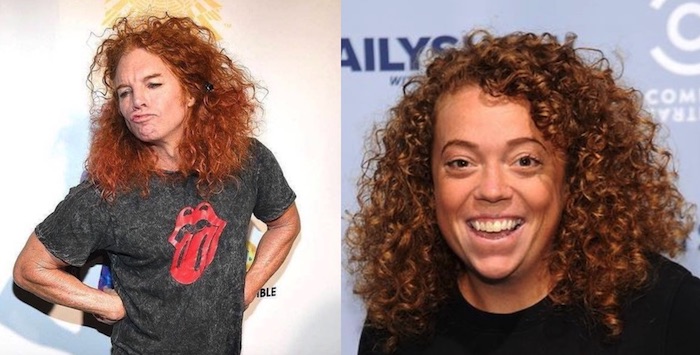 That’s a tough one.

Especially since 90% of Americans had no idea who she was to begin with. (FYI, she was a contributor and writer for The Daily Show With Trevor Noah.)

And why wouldn’t she be the one they trot out? Every year, someone with a connection to the Daily Show  headlines the ‘act’.

Which is a strange choice, since that was literally the show that kicked off the idea of ‘fake news’. “Jon Stewart: The Most Trusted Name In Fake News” — NPR 2010.

So year after year, you have someone from the original fake news source coming to the correspondent’s dinner to fling feces at Republicans.

She told abortion jokes. Mocked Sarah Huckabee-Sanders — even worked in an Uncle-Tom joke and a Handmaid’s Tale reference.

Funnily enough, there is a group that has that view of women in some parts of the world, but any critic who dared to be honest about it would have CAIR breathing down their neck with threats of lawsuits.

Here’s a couple of samples of her, uh, ‘work’

This woman is despicable. To makes these jokes about abortion one has to have a heart dripping with poison. This is not comedy at all. pic.twitter.com/0Crx1Bly5e

This is foul. It’s uncalled for. It’s nasty. And not funny. The WH staff should stop attending this dinner. https://t.co/yO0vFYtXdT

Roasting is supposed to be savage. But it’s also supposed to be good-natured. Even the newsmakers knew it went too far.  There was nothing goodnatured about it. It was a gleeful partisan pile-on.

Good for @TerryMoran and the other journalists speaking out. I suspect next year – if there is a dinner – it will be attended by mostly Ds. Why should Rs even bother to go anymore? https://t.co/Mm7iMDxFBC

Mocking a woman for her appearance? I guess that counts as woke now—just as long as she isn’t progeessive. Or thin. https://t.co/FjgeIcc79J