You’d think these guys were in the Witness Protection Program. We DID mention these name-changers were pedophiles, right?

Child predators hold an especially monstrous society for good reason. Not only do they prey upon our very most vulnerable people, but they have an obscene recidivism rate.

With some offenses, it’s easy to accept someone has ‘paid their debt to society’.  Sex crimes are a different animal. For good reason:

Some bleeding-hearts thought that carrying a permanent social stigma of ‘child predator’ is too big a burden for offenders. Here comes Big Government to the rescue.

Now it’s a snap for them to build a whole new identity. They could move in right down the street from a victim, and nobody would know it until they met. Worse, since the government is paying for gender reassignment, too, victims could sit across the aisle from their attacker on a city bus and never realize it.

That’s Canada for you. But if they can get away with pushing it there, you know activists will be pulling the same stunts here. Here are two examples of the worst kind of offenders successfully getting to change their names and start a new life:

On Sunday the Toronto Sun told the story of Adam Laboucan, now known as Tara Desousa. While the Sun went with the titillating headline that read, “Youngest dangerous offender gets DD breast implants” my concern was with the name change.

Laboucan was 17 when he was arrested for a brutal sexual assault on a three-month old baby in Quesnel, B.C. The child was so badly injured reconstructive surgery was needed.

Laboucan became Canada’s youngest person ever to be named a dangerous offender and therefore is held behind bars without any firm release date. So far, Laboucan, now Desousa, has been denied parole thanks to bad behaviour behind bars including prostitution, assault, drugs and threatening to kill a female guard.

That clip doesn’t mention that Laboucan also mutilated himself and had been eating his own flesh.

Did you catch that? A 3-month-old baby was molested so violently that he needed RECONSTRUCTIVE SURGERY.

Better still, taxpayers are on the hook for his DD implants and gender reassignment surgery.

“I am a transgender woman and I was born a man but now after surgery I became a full woman,” Desousa writes on her profile.

“I have a vagina, not a penis and also have 720ccs DD gel implants.”

Breast implants routinely cost as much as $10,000 depending on the type — and size.
Source: TorontoSun

A more civilized country would have solved the problem by dropping his corpse into a hole. The offender’s ‘feelings’ about it be damned. 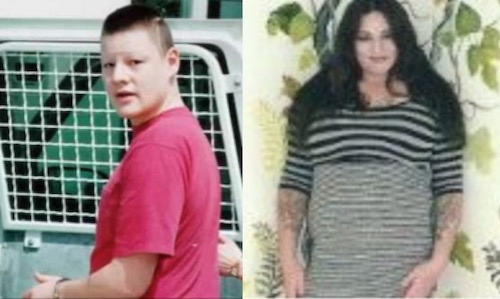 The other recent case is a man who was under investigation for child pornography offenses when his name change was granted. If this was his first offence, officials could be forgiven for allowing this to happen but Kevin Daniel Hudec was already a registered sex offender and designated as a long-term offender when officials in Saskatchewan granted his name change to Gabriel Michael Fisher.

This guy’s name change could have been denied just by Googling him. Hudec has a long history of child pornography convictions, his latest charges include making child pornography meaning he was there as children were abused for his sexual satisfaction.

If it’s not happening here yet, it will only be a matter of time.