The President had been hopeful for the chance of finding a negotiated solution with North Korea, but we all knew it was never set in stone.

After all, it’s been 65 years of unresolved tension since the Korean War sort-of kind-of but not-quite ended.

A lot of reasons for optimism had been evident…

Some of the test site facility is confirmed to be disassembled.

And that famous handshake when KJU stepped across the DMZ into South Korea was more ‘rapprochement’ than the two Koreas had seen since before the war.

The big unknown was whether that shaky peace could hold long enough to hammer out a lasting one.

That goal took a big step backward today with the ‘Singapore Summit’ being canceled.

Kim Jun Un, in the words of a wise man “Congratulations, you just played yourself”. Withdrawing from talks with #NKorea is 100% the right decision. #KJU doesn’t want a deal. He has deliberately sabotaged the talks over the last two weeks & was setting us up to take the blame.

The President sent a letter that was clear in its meaning, but which left room for KJU to come back to the table. 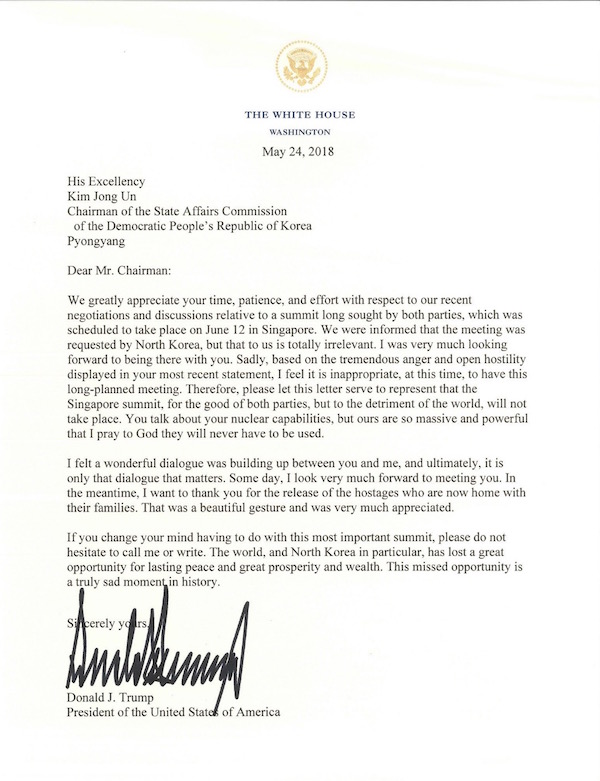 The President emphasized American strength. Awareness of our arsenal, a strong preference to resolve the conflict in a manner that will not result in their use, and gratitude for the release of the hostages.

With all that said, two things are abundantly clear.

He is resolute in the outcome he requires from North Korea.

And he is open to resuming the talks when KJU is ready to stop playing games.

#NKorea “shutting down” test site is a show to make #KJU appear cooperative & responsible. Bottom line is they either give up nukes & missiles or they don’t. I suspect they don’t want a deal,but want U.S. blamed for it so international sanctions collapse https://t.co/swc5F8YsKv

In the meantime, the ‘Maximum Pressure’ Campaign is expected to continue.

What was that line about speaking softly and carrying a big stick?