The $18 Billion he injected into our politics is a lot more corrosive than any alleged Russian interference.

This is the man who tanked an entire country’s economy, just so he could make a few more billions.

He was accused of playing a causal role (or at least being an aggravating factor) in Europe’s Immigration Crisis. After all, he pumped a half-billion (at least) into facilitating that ‘social change’.

He is NOT a good man. But he is one of the most influential people in American politics.

He recently dumped another $18 BILLION dollars — We’re talking James Bond Villain kind of money into his political operation ‘Open Society’ — and has now set his sights on reshaping the California election — and therefore policy — in his own image. We’ll come back to his plans in Cali, but first let’s remember who and what we’re dealing with.

He has no interest or commitment to the Constitution. Or national sovereignty. Or rule of law.

He only cares about power and influence. And a party that is rooted in ‘progress’ rather than ‘principles’ is easily manipulated by his money to provide both. All he has to do is convince enough people that what he WANTS is consistent with a ‘progressive’ agenda.

And with his deep-pocketed ‘Fellowships‘ in such fields as Advocacy, Media, and Activism, is it any surprise that he’s got shills willing to do that for him?

The SLPC, for example, gets big funding from Soros to call anybody to the right of Stalin a ‘hate group’. They have somehow managed to acquire a patina of credibility as a ‘rights activist’ group.

The SLPC just claimed that Trump calling a group of gang members whose record of intentional cruelty might make evin ISIS blush ‘animals’ was evidence that he’s a racist. Even though the AP deleted their tweet claiming the same thing, because it was unfounded.

It is unacceptable for such racist, dehumanizing language to now be repeated 10 times on the White House website in a document that speaks for America. pic.twitter.com/U5yfT33BX6

Maybe this should be their Midterm campaign posters: 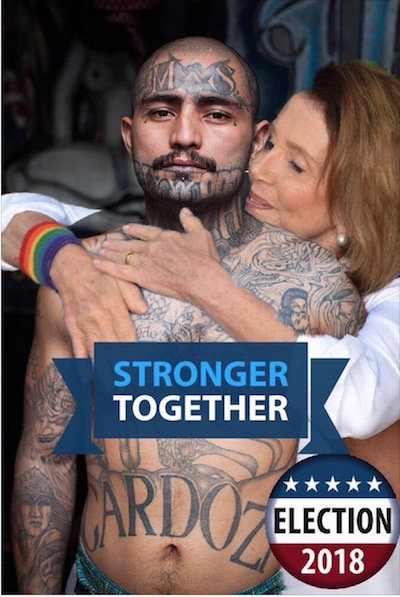 Which leads us to today. What is Soros up to now, with that $18 Billion dollar infusion of cash into his political machine?

You’d think he was a character out of Gotham City. He’s essentially trying to buy the election with people who will — policywise — do his bidding.

Wealthy donors are spending millions of dollars to back would-be prosecutors who want to reduce incarceration, crack down on police misconduct and revamp a bail system they contend unfairly imprisons poor people before trial.

The effort is part of a years-long campaign by liberal groups to reshape the nation’s criminal justice system. New York billionaire George Soros headlines a consortium of private funders, the American Civil Liberties Union and other social justice groups and Democratic activists targeting four of the 56 district attorney positions up for election on June 5. Five other California candidates are receiving lesser support.
Source: LA Times

There’s a REASON both Israel and even his native country, Hungary have outlawed Soros’s organizations, and have labeled Soros ‘Enemy Of The State’.

Maybe they were onto something.

After all, one modern ‘aristocrat’ throwing money around in the political process to overrule the voices of the citizens — that’s precisely the kind of Tyranny the Second Amendment is designed as a safeguard against in the first place. Isn’t it?

Should Politicians be taking a no Soros money pledge?