Will CNN and Congress be looking into THIS website’s political interference? Or do they only dig into pro-Trump influence?

Everyone’s heard about the social media data mining by Cambridge Analytica. But what about these guys?

Buzzfeed is all-in on leftist issues. Of course they are, they were the very first ones to actually publish the bogus Steele Dossier that no self-respecting journalist would dare touch.

They’ve made no attempts to hide their biases. In fact, when Trump became the nominee, they cut ties with any Republican advertisers because, they argued, promoting Trump (like promoting cigarettes) is ‘harmful’.

Buzzfeed — with an audience of 650 Million people — had become, in the company’s own words, a ‘data monster’.

So is ‘data monster’ a ‘good thing’ that you brag about? Or is it something to get social media CEO’s and politicians to clutch their pearls. Just looking for some consistency here. After all, Obama was hailed as a genius for leveraging Facebook.

In fact “50 Strategies That Changed History” Daniel Smith (2015) actually closes with the account Obama’s harnessing of Facebook to secure his win. “And if all that weren’t enough, Obama found himself with an enormous database of useful personal information.”

He did it hiding in plain sight. But Obama and leftist social media campaigns never seem to enter the discussion.

Remember those quizzes that Cambridge Analytica (that name kept coming up, as well as their role in supporting a certain Republican Candidate for President) caught hell for using to gather data?

Do you know who else is not just famous, but infamous for offering ‘which Disney Princess are you’ or ‘what does your favorite color say about your personality’ quizzes? You guessed it… Buzzfeed.

There’s still a page dedicated to them.

That personal data is apparently being harnessed for political clout.

Former BuzzFeed Vice President Rena Shapiro, who led the website’s native political advertising team during the 2016 election, described candidly in a pair of unearthed interviews how she partnered closely with political groups to create ads that harnessed the data BuzzFeed collects on its audience of over 650 million people to solve their “ultimate need, which is to get elected, to get their message out there, or to canvas people together to create impact around a cause.”

“This is a data monster that we’re working with here at BuzzFeed, and it’s awesome to harness that power to everyone’s advantage in the political space,” Shapiro said in December 2016 on “Digital Politics with Karen Jagoda.”
Source: DailyCaller

A “Data Monster” explicitly being harnessed to tilt political campaigns in favor of their preferred party? 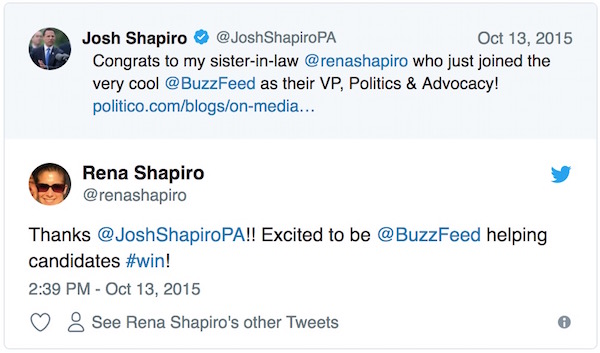 Here’s a Newsweek article from 2014 nobody bothered to ask Zuck about when he had that little chat with some Senators.

In a new blog post, Barker explains what that information looks like. “When you visit BuzzFeed, they record lots of information about you,” he writes. “Most websites record some information. BuzzFeed records a whole ton.” In any given visit, Barker writes, BuzzFeed records answers to the following (in addition to what’s passed along to Google for analytics purposes):

Have you connected Facebook with BuzzFeed?
Do you have email updates enabled?
Do they know your gender & age?
How many times have you shared their content directly to Facebook & Twitter & via email?
Are you logged in?
Which country are you in?
Are you a BuzzFeed editor?
…and about 25 other pieces of information.
Newsweek

They are using their access to personal info to — effectively — propagandize on behalf of the Anti-Trump forces?

Isn’t that EXACTLY what everybody was so angry with Cambridge Analytica for having done — and they got slapped around for it?

Will Facebook Similarly slap down Buzzfeed for exactly the same malfeasance on a much larger scale?

They had 650 Million users.

Let that number sink in.

Officially, the sites ethics rules and guidelines suggest a complete separation between advertising and editorial staff. But those lines get blurred. And in some cases where editors ‘vet’ advertisers… crossed completely.

“This is the data that we have. So, we know, for example, what works on the edit side, we can then come back and say, ‘okay, this type of concept seems to resonate really, really well with adults over age 45,’” Shapiro explained. “Therefore if you know you’re going to target adults over age 45 who live in Ohio, Florida or Nevada, we can then create custom content to resonate with those specific key target audience groups.”

“We have the ability to understand what these audiences are interested in and then we can create concepts and content that will enable a group or candidate or a nonprofit, even, to push that concept out to that target audience in a very interesting dynamic way that almost makes it irresistible,” she said.

“That’s a really powerful tool for campaigns and issue advocacy groups and PACs to leverage,” Shapiro said of BuzzFeed’s capabilities.

So does that supposed ‘wall’ between them protect from bias?

Not even close. Go ahead and try to find a negative Buzzfeed piece about Obama. Or a positive one about Trump.

You’re about as likely to find an unfinished meal in front of Michael Moore.