It’s the end of a foreign policy era. Thank You, Jesus!

It’s been a really, really crappy foreign policy era for the United States.

Yet, Barry really thought the Iran Deal was his landmark achievement in foreign policy.

That was to be his legacy.

Which just goes to show you how unbelievably nutty Obama was when it came to foreign policy.

That’s why President Trump nixed the deal. It was a crap deal to begin with, and Barry couldn’t even get Congress to agree to it, so he bypassed them with his ‘pen and his phone’.

The alleged-Constitutional scholar, Obama completely disregarded the Treaty Clause of the Constitution when making the deal.

And somehow, Trump is the ‘dictator’.

Trump has this one absolutely right. (Of course, that seems to be the general rule of the Trump Administration to date.)

In fact, the Iran deal was not even a deal at all.

It was never signed by any of the parties (the U.S., Iran, France, the UK, Germany, China, and Russia). It was unclear about crucial subjects like ballistic missiles, because the “deal” was described differently by the Joint Comprehensive Plan of Action (JCPOA) and by the UN Security Council Resolutions that were meant to implement it. And, crucially, it was never sent to the U.S. Senate for ratification.

Fortunately, we’re erasing that ‘Legacy of Appeasement’ that Obama championed.

Barack Obama came to power convinced that the United States was at best a negative force in world affairs, and at worst the cause of the world’s problems. He believed that America could be a force for good, but only if it renounced its traditional allies, abandoned its principles of freedom, and gave up its national interests in favor of rising regional powers elsewhere.

In his first year in office, Obama backed away from agreements that his predecessor had made to provide missile defense in Europe. He also reached out to the Muslim world, beginning with obsequious speeches in Cairo and in Ankara, and deep genuflection to the Saudi king. When the Green Revolution took to the streets of Iran, Obama allowed the regime to consolidate power. He criticized Israel openly while cozying up to the Cuban dictatorship.

One could even say that President Trump is ‘Making America Great Again’.

The Conservative Twitterverse had a whole lot of fun with the vanishing Obama legacy.

Ba bam! Obama’s legacy is a big fat NOTHING! pic.twitter.com/w1vNDnbLIN

Obama's legacy is unraveling like a mummy on a merry go round lol pic.twitter.com/lIJk97GiBa

"Poor egotistical Obama! Thought he was the world’s greatest painter & now Trump has painted right over his canvass" @DineshDSouza
Well said, Dinesh! It is happening and all he can do is watch.
How sweet it is!
#IranDeal #ObamaLegacy#IranDealWithdrawl #WednesdayWisdom #MAGA pic.twitter.com/TGd2a7iX6N

Do you guys remember that guy who was president before Trump? I’m starting to forget his name. O… Oba… Obama?

Trump is literally erasing Obama’s legacy off the face of the Earth ????#Iran 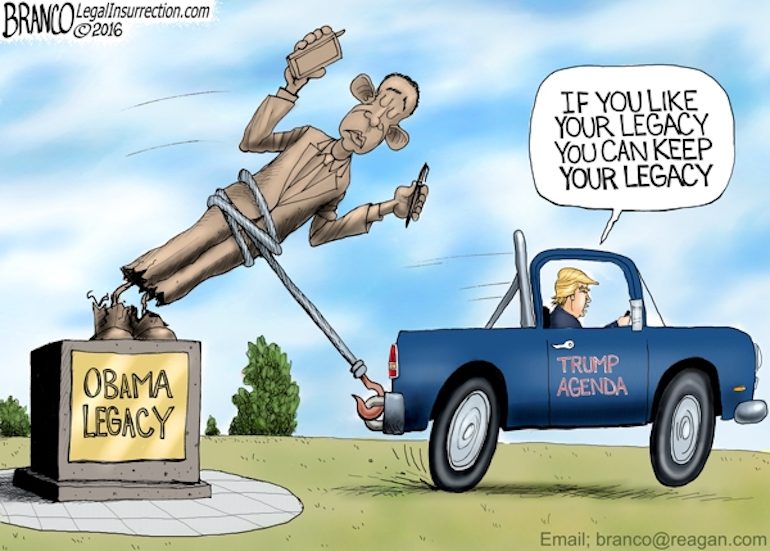