Do you think they might have enjoyed the ‘Trump Bump’ more if they weren’t so busy being super-political?

Every time Starbucks turns around lately, they seem to be neck deep in some stupid controversy. Time and again after his Inauguration, they aligned themselves against Trump, and with ‘the resistance’, followed by a scramble to win back the customers they had deliberately snubbed in the process.

They joined in — lockstep — with every ‘Progressive’ cause that came their way. But like the parable of the frog and the scorpion, it did them little good. They kept getting stung anyway.

Remember that insanity in Philadelphia with the guys who were loitering in Starbucks, using the toilet, and refusing to leave? It led to front-page headlines, when the police got involved.

After that, Starbucks did their media mea culpa and pledged to open their washrooms to anyone wandering in off the street. This brought on a whole NEW set of problems, including drug use, biohazards and staff getting stuck with needles.

For all of that jumping through hoops, Starbucks is still on the decline they were betrayed by their own faithful lemmings — in an economy that even the New York Times admitted was in danger of besting their Thesaurus’s synonyms for ‘good’.

While the rest of America is enjoying the good times… the “Wunderkind” coffee company is taking a step backward… and closing 150 stores.

And they can’t even blame the studies with the ‘fecal count‘ found in their drinks.

Starbucks plans to close about 150 U.S. cafes next year to boost performance
The chain normally closes around 50 stores in a regular year
The world’s largest coffee chain is facing competition both from upscale coffee houses and lower-priced fast-food chains like McDonald’s and Dunkin’ Donuts

Starbucks says it will speed up its store closings in the U.S. next year as it tries to boost sluggish sales.

The Seattle-based company announced that it will close 150 under-performing stores in heavily penetrated markets, up from the usual rate of 50 closings a year.

The company also said it expects 1 percent growth in global sales for the third quarter, a period that encompassed an uproar over the arrest of two black men at a Philadelphia Starbucks. Source: DailyMail

Do you think it’s because people just aren’t buying as much coffee, now? Hold that thought:

E-Commerce Firm Black Rifle Coffee Has Expansion in Its Sights

Still buying coffee… just not doing it at Starbucks quite so much.

If their customers gave them a ‘breakup’ card, do you think it would look like this? 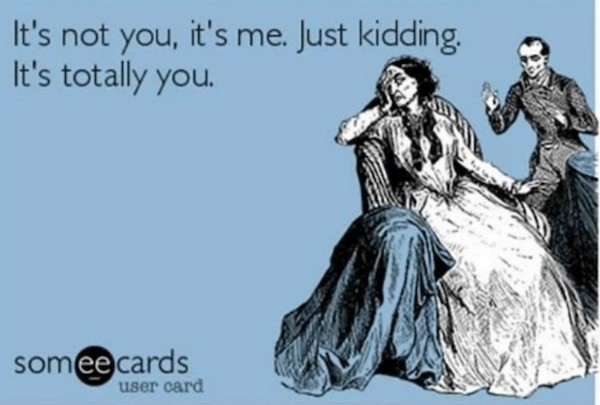