We’ve all come a long way from the time when AlGore’s propaganda piece presented us that discredited Hockey Stick.

Even Trump spiking the Paris Accord doesn’t seem to have bothered people all that much. Looking around, I’ve noticed we’re not gathered around low-voltage LED lanterns, debating whether the world will end in by fire or by ice by 2015 when the ice caps are gone for good.

We seem to have survived this long. And we don’t even have Obama as president making ‘the waters stop rising’ and ‘the Earth beginning to heal’ anymore. Go figure.

But what do the PEOPLE think, when they’re asked about what kind of issues keep them up at night? What’s the Biggest Problem America faces right now?

Americans came up with 36 answers to a Gallup poll asking the biggest problem currently facing the country, and no one answered “climate change,” with only two percent even mentioning the environment at all, Gallup revealed last week.
In a random poll of 1033 U.S. adults, immigration topped the list as the greatest problem faced by the United States at this moment, with 22 percent offering that response. While 17 percent responded that dissatisfaction with government was the biggest issue, others proposed race relations, national disunity, healthcare, and family decline.

Missing from Gallup’s list of causes garnering at least 3 percent of responses was the vague category of “Environment/Pollution,” which drew only 2 percent.

Well, what a coincidence!

They’re concerned about precisely the same things the news and ‘Resistance’ politicians told us the narrative was supposed to be about!

When asked what’s wrong with America, the Economy wasn’t much of a concern, but the Environment rated even lower than that.

Race relations were near the top of that list, right behind immigration and generic dissatisfaction with the government. 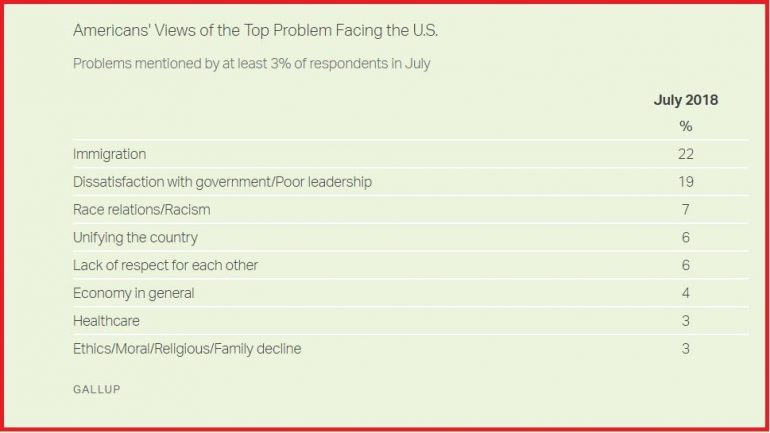 If someone told Republican bigwigs that this is what the public opinion would look like, after a year and a half of ‘resistance’ tactics, don’t you think they’d be dancing for joy?

ISIS and Terrorism aren’t on that list — have you noticed?

Healthcare is a lousy 3%… and they didn’t even manage to Replace Obamacare yet.

Looks like Trump is doing pretty well, all in all.