It’s the second time this month he’s been called out as racist.

Maybe he should stop calling everyone ELSE racist and take the proverbial log out of his own eye.

The American Feminists will be joining the outrage over this one, right? Unless, of course, they are nothing more than the activist arm of the Democrat party.

Noah has really stepped in it this time.

He’s still taking blowback from when World Cup enthusiasts called him a racist for saying that the black players on team France were ‘African’ and not ‘French’. That’s ok. He just doubled down and insisted he had the high road. Until now.

Now he’s backpedaling over his joke that no Aborigine women are pretty… and the only possible thing they could be good for is performing Oral Sex to the sound of a didgeridoo.

Way to compound the insult with a cheap sexual slur. All they could POSSIBLY be good for is giving some guy who doesn’t respect them an orgasm.

Classy. And “not racist at all.”

The clip WAS available on video. Conveniently, it’s been pulled.

Here’s the reaction by someone who saw it before it was scrubbed from the internet. Notice that clip isn’t so long ago? The damage control has been fairly recent.

@Trevornoah was a huge fan until I saw this video. Who are you to mock the ABORIGINAL race? This was racist, uninformed and degrading. Oh and Aborigine is a derogatory term, used by the white invadershttps://t.co/ydNWBXTuat

Footage of his stand-up show, from 2013, emerged ahead of his Australian tour, which starts in Melbourne next month.

‘All women of every race can be beautiful,’ Noah tells an audience in the footage which emerged online overnight.

‘And I know some of you are sitting there now going, ‘Oh Trevor, yeah, but I’ve never seen a beautiful Aborigine’, he jokes.

‘Plus it’s not always about looks, maybe Aborigine women do special things, maybe they’ll just like, jump on top of you,’ Noah, 34, concludes, before imitating the sound of a didgeridoo while inferring oral sex.

Noah, who took on the role as The Daily Show host three years ago from Jon Stewart, apologised for his comments on Twitter on Monday.

‘After visiting Australia’s Bunjilaka museum and learning about aboriginal history first hand I vowed never to make a joke like that again. And I haven’t. I’ll make sure the clip from 2013 is not promoted in any way,’ he wrote. 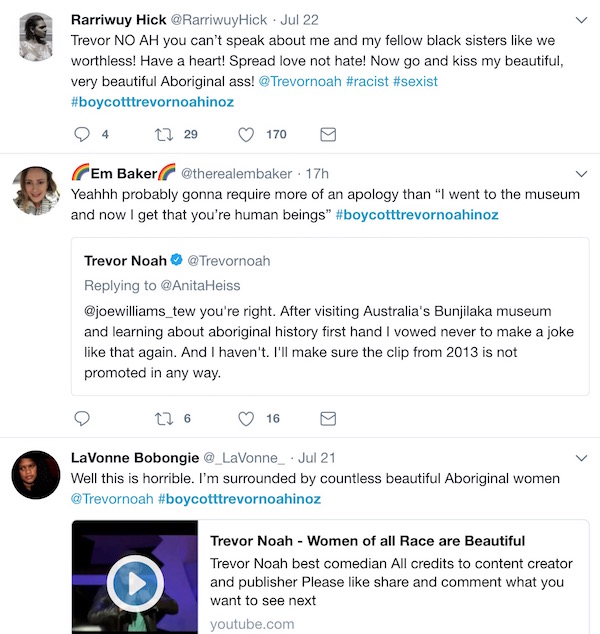 Of course, he’d laugh his fool head off if some white comic took his joke, and retooled it to be about a black woman right? Or would that be ‘deeply offensive’?

But we’re missing the point, obviously. You see that bit was all the WAAAAAAAY back in 2013. Which was (Let’s see…. sharpen my pencil…)

Maybe we should stop with ‘ancient history’. The other two are part of what got him into this mess in the first place.

And WHY should the year make any difference, Trevor?

Because was something a Professional Comic said — in a deliberately thought-out act, performed presumably in front of thousands, humiliating people he likely would assume would not be present to see his act.

This was NOT an off-the-cuff private conversation. That was part of a developed and rehearsed act. An act he performed just five short years ago.

Isn’t HE the one who keeps telling us that Trump’s private hot-mic statement from THIRTEEN years ago is a permanent stain on his character and record? Well, then, why wouldn’t this ALSO be a ‘permanent stain’?

But just because Trevor Noah is a leftist Hollywood Elite, he should get a pass? (If yes, Trump should get the same pass, because back then, so was he.)

Are we to believe he suddenly sees ‘Aborigine’ (his word, not ours) woman as his equal now?

Can he tell us that with a straight face?

I wouldn’t bet on it.

Or is it far more plausible that this public outcry taught him to keep his more racist inclinations private?

Has Trevor Noah officially lost any claim to ‘moral high ground’ to beat up anyone — anyone at all — for claims of racism?

What do you think of Trevor Noah's 'moral high ground'?