The ‘rational’ left has bubbled over in outrage. Again. They’ve attacked Trump’s Walk of Fame star… again. This time, they destroyed it.

This was no mere emotional outburst where some unbalanced gasbag, already entrenched in team #resist flipped out and vented emotions on it with whatever means they had on hand.

After all, who ‘just happens’ to walk the streets with a pickaxe… concealed in a guitar case? 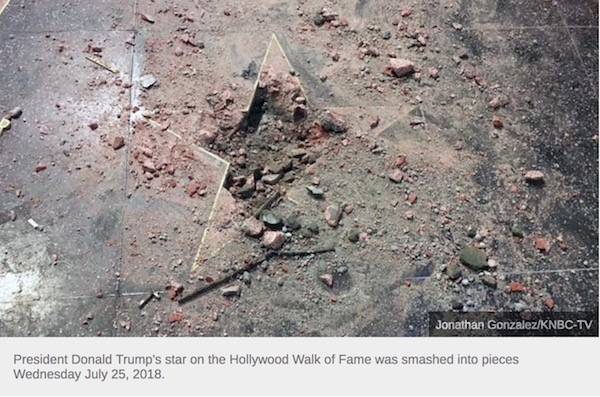 This was pre-planned and malicious property destruction. And they did it because they really, REALLY hate Trump.

It was a stunt, just like when low-life-Lopez waited for the cameras and lighting to get into place before he pretended to urinate on that same star.

President Donald Trump’s star on the Hollywood Walk of Fame was destroyed Wednesday morning by a man with a pickax that witnesses say he concealed in a guitar case, police said.

Officers were called around 3:30 a.m. to the star’s location on Hollywood Boulevard near Highland Avenue, where they found a small pile of rubble in place of the star that Trump received in January 2007 for his role in the NBC show “The Apprentice.”

The star-smashing suspect, who reported the crime to police, later turned himself in to Beverly Hills police, according to the Los Angeles Police Department. The pickax was left at the scene.

Witness David Palmer […] was surprised to see the Walk of Fame vandalism.

“I’m like, ‘Why are you hitting that star? What did Donald Trump do to you?'” Palmer told NBC4. “Then he went around the corner and I think he left.

It’s not the first time it’s been damaged, either.

The last person to take a pickaxe to it received a $4k fine, 3 years probation, and 20 days of community service.

Other people have found other ways to dishonor it that stopped short of destroying it, from getting a photo of themselves giving the ‘one finger salute’ to Trump’s spot on the sidewalk, to fouling it with spit (or worse).

It is worth noting that other ‘Walk of Fame’ celebrities who have made the news for the wrong sorts of reasons — Kevin Spacey and Bill Cosby, for example — do not seem to have had their stars targeted in any similar manner.

If you watch the video clip, you’ll see that accused sex offender Kevin Spacey’s star is surprisingly close to Donald Trump’s. But his star managed to survive the night undamaged, even with a pickaxe left on the scene.

Trump Derangement Syndrome was a joke name for people who become irrationally emotional over the mere mention of Donald Trump.

If this trend keeps up, TDS may warrant further study as a legitimate diagnosis.