“It was a horrible experience, I never want to go through it again”, she said.
Seeing as it cost her an eye, you’d think so.

In most places, if you don’t close your door, you could get a stray animal find its way into your home, looking for scraps.

But in New Hampshire, at least in her case, the stakes are higher. Apryl Rogers found a black bear in her house.

What made matters worse?

71-year-old Apryl Rogers wheelchair … her daughter says her mother will be ok and she is a strong woman @wbz pic.twitter.com/TXYJvCiGhm

If you’re in a wheelchair, like she was, fleeing isn’t really much of an option.

She still managed to make her way to the living room to call for help.

“I said to myself, ‘You’ve got to do it, or you’re going to die right here,’” Rogers told News 9’s Tim Callery.

“I’m not going to let anything get me down, you know? It’s not worth it. I’d rather laugh than cry — and I do. I have my moments when I cry, but I’m fine. I’m happy,” Rogers said.

Rogers said she has no hard feelings toward the bear.

She still has a couple more weeks of rehabilitation before she can head home.
Source: WMUR

The bear broke her vertebra, cost her an eye, slashed her face and scalp and “she has ‘no hard feelings’ for the bear”.

Can you even imagine!

The attacks where she lost her eye happened July 17. A little more than a month later she’s nearly finished rehab, and will soon be ready to go home.

It was the sounds of her cats freaking out that first alerted her to the problem. 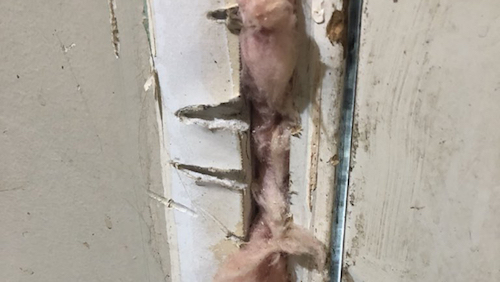 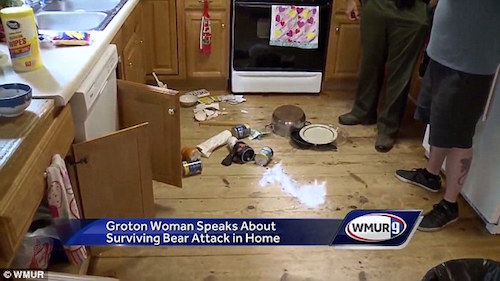 While Apryl Rogers’ daughter Stacey has seen bears in the area before, this is something she never expected.

“After it attacked her somehow some way she was able to get to a phone and call 911 which is a miracle in itself,” Stacey Murray said.

Rogers is in a wheelchair and right now Murray says it’s unclear if she tried opening the kitchen door for the bear to get out.

“She was yelling at the bear to get out,” Murray said, describing the encounter as “really very scary.”

Claw marks were in the kitchen door and the cabinets were emptied.

“This was just a complete mess. Even the door to the oven was open there was bear feces everywhere there was blood all over the place. It was like a war happened,” she explained.
Source: Independent