At what point should we start calling him a Community DISorganizer? It’s news like this that got Trump elected in the first place.

How do you celebrate a day named after the first President never to have a single day of Peacetime in his entire eight years, whose aggressive stance on gun control spiked gun sales into the stratosphere, and whose Presidency was marked by city-burning riots?

Apparently, if you’re in Chicago, you commemorate it with a double-digit death toll.

ABC 7 Chicago reports that from Friday at 5 p.m. through Sunday night, at least 63 people were shot, with at least 10 dying from their injuries.

One paramedic reportedly described the streets of Chicago as being “a war zone.”

“We know that some of these incidents were targeted and are related to gang conflicts in those areas,” Chicago Police Chief of Patrol Fred Waller said on Sunday. “They take advantage of that opportunity and they shoot into a crowd, no matter who they hit.”

ABC 7 Chicago adds that “during one two-and-a-half hour-hour period, 25 people were shot in five multi-injury shootings.”

Despite the fact that it was a holiday specific to Illinois, that didn’t stop the Left from everywhere else pushing the Obama Day trend on social media.

You know what they DIDN’T turn into a ‘trending topic’?

Courtesy of HeyJackass. (There are a lot more where that came from.) 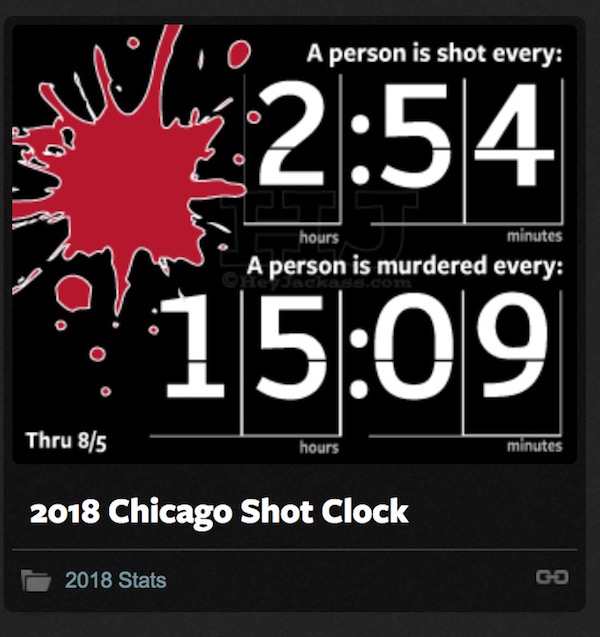 These are the kind of stats the Left hope you don’t notice.

Now, let’s get back to the Left’s Obama-worship.

Here’s the tweet of one guy that was celebrating Obama day, mostly because he saw it as a punch in the face to the President who came in after him.

Happy Birthday, Mr. President. The best gift we can offer is voting against hate in November, and proving we are as powerful as you’ve always told us we can be. #ObamaDay

#Civility is dangerously close to complicity.

We should not have to offer an olive branch to an administration that burned down the tree.

Bet he still doesn’t realize that the IRS has since apologized for being weaponized against Obama’s political opponents during an election year. And he’s probably got nothing to say about the journalist who stood before Congress and complained that his administration not only broke into her personal and work computers, but they also swapped out the hard drive to cover their tracks when she let the Feds look at her machine. Fortunately, she’d already had a third-party company look at it.

Full story here —
Dear CNN: Reporter Testifies Before Congress That Obama-Era Intel Agencies Spied On Her — Is That News?

He’s a real ‘hero worth celebrating’, that Obama. But what did we really expect? We elected a ‘community organizer’. And this is the community he had so proudly ‘organized’.

Here’s the weekend news report from the Community that was celebrating his (alleged) greatness.

Just a few days earlier, there was a massive anti-violence protest in Chicago:

Maybe it’s time Chicago takes a page from the last Presidential election. What they’ve been trying so far hasn’t been working. Why not try the other guy? ‘What do they have to lose’.