This will throw a wrench in those ‘bash the fash’ protests.

Maybe you’ve heard claims that Trump is a Nazi.

It’s almost too common to report on. You see it in banners and protests. You see it all over Twitter. The shrieking and irrational people on the left [and the Media(D), but I repeat myself] love to tell us how they believe Trump is ‘literally Hitler’.

Well, guess what. Somebody finally found a real, live Nazi here in America.

A court order called for his deportation. For those of us who went to public school, that was 14 years ago.

Jakiw Palij is now 95 years old and bedridden. He is also the last-known Nazi collaborator (unless you count Soros) in the United States. He has been living in Queens, NY.

Meetings with Germany for them to take back their trash was our new German Ambassador’s priority.

This might be a good time to mention that Schumer and company stalled the appointment of an Ambassador to Germany until April of 2018 — more than a year into the presidency.

So, a Nazi that was discovered in America back in 2004 wasn’t successfully given the boot by Dubya’s administration. Nor by Obama’s administration. But as soon as our German Ambassador was confirmed, Trump told him that ejecting this dirtbag from the country is to be his top priority.

And ICE just deported them. Yes, THAT ICE, the one that many on the Left are calling for us to abolish.

Former Nazi camp guard Jakiw Palij's arrival in Germany ends a 14-year effort to remove him from the U.S. We are grateful for the assistance and support of the German government, including Ministers Maas and Seehofer, for making his removal possible. https://t.co/y5ZFqAU5ae

It looks like Trump needs to get remedial Nazi lessons, he’s just not very good at being a Nazi. The same could be said for the good folks at ICE, too, for that matter.

To hear MSNBC and CNN tell it, Trump ought to be sizing this guy up for some kind of a medal of honor, not to have his sorry ass thrown out of the country.

And what is the official explanation for throwing him out?

“To protect the promise of freedom for Holocaust survivors and their families, President Trump prioritized the removal of Pali,” the statement continued. “Through extensive negotiations, President Trump and his team secured Palij’s deportation to Germany and advanced the United States’ collaborative efforts with a key European ally.”
[…]
n a font larger than the rest of the press release, the White House emphasized: “Palij had lied about being a Nazi and remained in the United States for decades. Palij’s removal sends a strong message: The United States will not tolerate those who facilitated Nazi crimes and other human rights violations, and they will not find a safe haven on American soil.”
Source: DailyWire 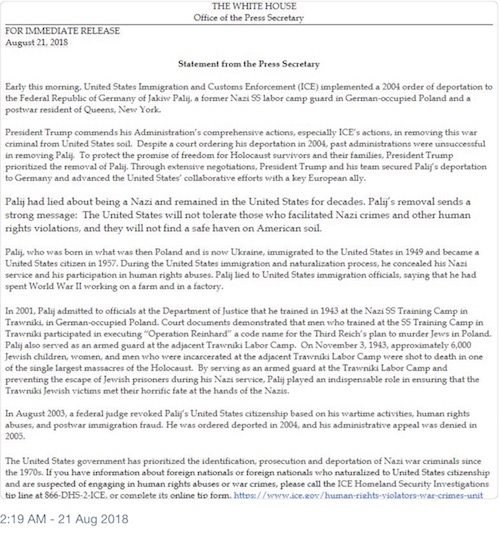 Palij came into America under false pretences after the war, was granted Citizenship in 1957 based on those same lies, and has been living here ever since. Until now.

It’s almost like all those ‘Trump is a Nazi’ claims were completely bogus or something. Huh. Are we to doubt the credibility of our ‘heroic’ and (allegedly) free press?

But wait… wasn’t he was discovered back in 2004. If Obama is the Messiah the media told us he was, what was Obama’s priority in his time in office?

His administration took as a top priority somebody from Germany, too, didn’t he?

You may remember the Romeike family. We covered their story in ‘Homeschoolers Face Ghosts of the Third Reich‘

The short version was that a 1930’s law in Germany gave the State final authority over children, including the right of the state to indoctrinate them (in this case, Secularizing them and undermining religious belief).

Christian parents didn’t want their kids indoctrinated and homeschooled them, instead. They faced court sanctions by the government, and heavy fines. They were threatened with having their children taken away. They sought political asylum in America, and the courts, after hearing their case, accepted them.

Obama, and Holder, fought to reverse that court decision and send them back.

So, to recap, a real-life Nazi collaborator lived quietly in Queens under Obama and a Christian family of legitimate political refugees — who a judge agreed were persecuted for their faith — were harassed by the Obama administration who tried to send them back to Germany.

Is it any wonder we don’t take those claims that everyone to the Right of Stalin is ‘a Nazi’ very seriously?

The evidence speaks for itself.