Let’s just say that this is not going to go over well on college campuses.

New analysis from the Center for Disease Control (CDC) reveals that there has been a ‘steep and sustained increases in STDs’ for four consecutive years. That seems to be the new trend.

The CDC reports that Syphilis cases nearly doubled, there was a 67% rise in Gonorrhea cases, and cases of Chlamydia are at record highs.

The combined total for all three STDs in 2017 was a whopping 2.3 million. 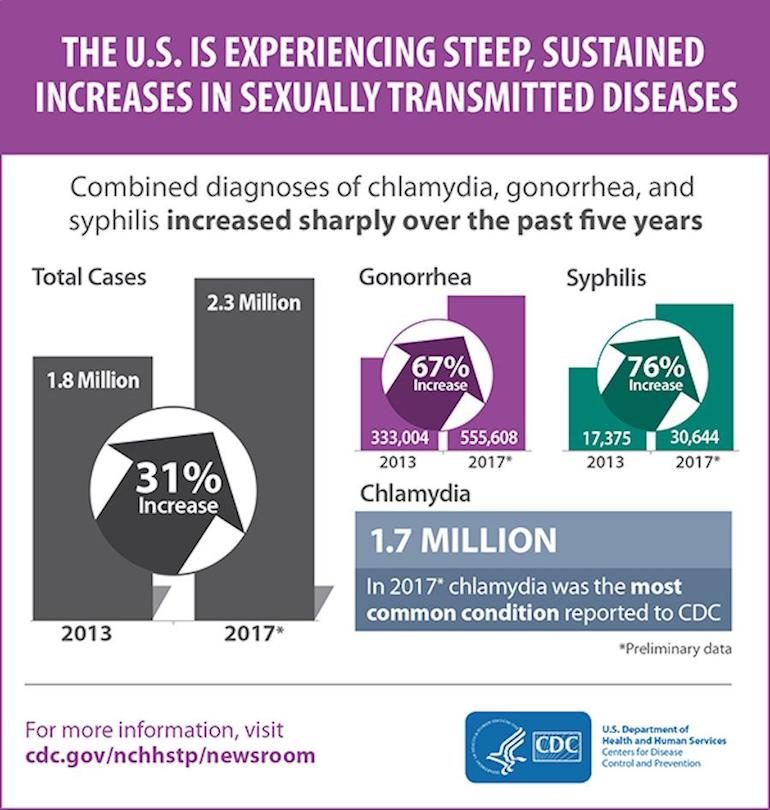 To what do they attribute this continuous rise in STDs?

Some experts have said that advances in medical diagnosis have caught STDs early. Other experts say that there is an increase in sex without condom use. (How is that possible with our exhaustive sex ed curriculum?) Still more attribute it to Tinder and other dating apps.

The Director of CDC’s National Center for HIV/AIDS, Viral Hepatitis, STD, and TB Prevention, Dr. Johnathan Mermin, said, ‘We are sliding backward. It is evident the systems that identify, treat, and ultimately prevent STDs are strained to near-breaking point.‘

It seems as though many are trying to pin the blame on dating apps.

There has been a huge rise in the popularity of dating apps which allows people to connect more easily with potential sexual partners, and engage in high-risk behavior like sex without using a condom. (Or sex with some random person that you don’t know.)

The apps are pretty quiet on STDs and they have their reasons. They’re not good reasons…

“We used to think about what we can do with bathhouses and sex clubs to make sure people’s risk was reduced,” BHOC director Dan Wohlfeiler said in a Vox report last fall.

But many of popular dating apps have been hesitant to support sexual health, according to Jeffrey Klausner, a University of California, Los Angeles STD researcher.

“They realize that their sites could be stigmatized for being associated with STDs. They do as little as possible,” Klausner told Vox.
Source: The Blaze

And then, there’s this:

We say it because people do it: Don't wash or reuse #condoms! Use a fresh one for each #sex act. https://t.co/o3SPayRf9m pic.twitter.com/AwkPqE9YMl

Why do you have to tell people that?

It looks like our sex ed curriculum isn’t so great after all.

Is it Tinder, Grinder, and Bumble’s fault that people are tapping their phones and choosing to have more unprotected sex?

No. In my opinion, that’s like blaming the gun for a mass shooting. The apps, like said gun, are merely tools that facilitate the behavior that has already been decided upon by the person carrying out the action.

Instead, I say we lay the blame where it deserves to be: at the feet of the sexual ‘progressives.’

These are the people that have divorced sex from emotion and consequences, and encouraged a hook-up culture that views sex simply as pleasure. Feminists have pushed the notion that women should engage in sex the same way that a man does (or is wired to), even though biologically, men and women view sex differently.

These same sexual progressives have told us time and again that all we needed was ‘better’ sex ed programs in schools in order to explain the need and types of ‘protection’ because kids will do it anyway. It seems that the more thorough the sex ed is, the higher the rates of STDs.

God forbid you mention abstinence education, which has a 100% effectiveness rate against STDs.

This is the hell you created and people are suffering for it.

I’m kidding. That’s not classy at all.

If You Are In The Market For A Good .44 Magnum…Then Check These Babies Out
Great American Outdoors
Unvaccinated Students Corralled into Separate Pen at LA High School
Flag And Cross