Credit where it’s due. When everyone else in Silicon Valley seems hellbent on shutting down Infowars, Twitter maintains some semblance of platform neutrality.

We’re not saying Twitter is bias-free. Not at all.

After all, this is the story some of their muckity-mucks shared: Leftist Want A ‘New Civil War’ – This Post Is Disturbing

And it’s no real secret they’ve been playing with the numbers and reach.

Of course, the latent tyranny on the left is outraged that the guy they hate so much can still reach the public with his ‘toxic words’.

Twitter — who the Left, when it suits them, likes to remind us is ‘a private company that can exclude whoever it damn well pleases’ — is facing pressure to cut Alex Jones off.

Pressure from an Obama flunkie.

But TRUMP is the real threat to free speech, eh?

Former Obama official Emily Horne demanded that Twitter CEO Jack Dorsey censor Alex Jones after Dorsey made a statement in which he said he wouldn’t be swayed by “outside pressure” to ban Jones.

Twitter is the only major social media outlet not to restrict Jones in the aftermath of a purge which began as a CNN lobbying campaign to ban its competition.

We didn’t suspend Alex Jones or Infowars yesterday. We know that’s hard for many but the reason is simple: he hasn’t violated our rules. We’ll enforce if he does. And we’ll continue to promote a healthy conversational environment by ensuring tweets aren’t artificially amplified.

If we succumb and simply react to outside pressure, rather than straightforward principles we enforce (and evolve) impartially regardless of political viewpoints, we become a service that’s constructed by our personal views that can swing in any direction. That’s not us.

Frankly, that’s a good decision not just for freedom, but his shareholders as well. They won’t be wondering if it’s the beginning of a conservative purge, and a loss in revenue from those advertising sources.

We’re not saying there’s an even playing field on their platform. Not by a long shot.

But at least their home team isn’t winning by forfeit.

When you catch someone doing the right thing… encourage it! If enough people did that, it might embolden people to make the right choice more often, rather than living in fear of the mob coming down on the ‘unpopular choice’. 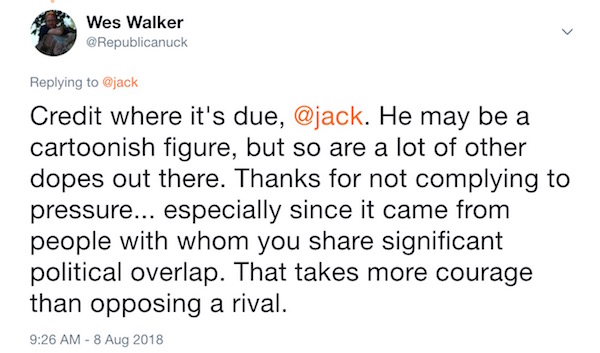 And, speaking of the mob… cue the demands for Alex Jones’ scalp.

With the occasional voice of (relative) reason mixed in. Not sure that  his clownishness rises to the level of ‘hatred’ but the overall idea is right:

And, because you knew this was coming — how long did it take for commenters to violate Godwin’s Law? Not long at all. 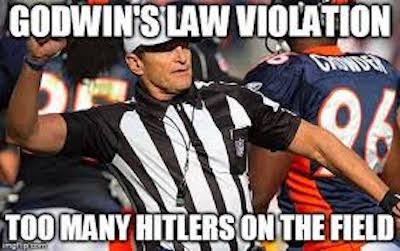