In our current virtue signaling culture, everyone is taking every opportunity to state that they dislike President Trump. Even at John McCain’s funeral.

Well, perhaps that could be expected considering how McCain reveled in his anti-Trump stance in the last year or so of his life.

There was that time that Rep. Maxine Waters (D-CA) used the funeral service of comedian and civil rights activist Dick Gregory to rant about Trump.

And let’s face it, this whole days-on-end send-off for John McCain is somewhat reminiscent of the unending mourning of Kim Jong-il back in 2011.

The Great One, Mark Levin said that the coverage seemed a little ‘over the top’.

It’s to contrast McCain and Trump.

All of a sudden, the left is just fine with John McCain. They wish that all Republicans were like John McCain.

I’ll bet they do.

He caved to the left and famously gave a thumbs down to the skinny repeal of Obamacare despite having run on a ‘repeal and replace’ platform.

That made him the great uniter in the Senate. He suddenly became a great man for many Democrats.

That’s because, for the left, ‘bipartisanship’ means always caving to their agenda.

The family’s spiteful move of not inviting McCain’s former running mate, Sarah Palin, to the funeral was just petty. Palin became the lightning rod for the attacks and mockery in 2008. Frankly, it was likely because of Palin that McCain did as well as he did in the general.

McCain, the ‘reach across the aisle’ Republican was so conciliatory that he made it clear before his death that he didn’t want the sitting Republican president attending his funeral.

Everyone and their grandma are now going out of their way to show the differences between McCain and Trump.

This begs the question, was the funeral more about Trump or more about McCain? 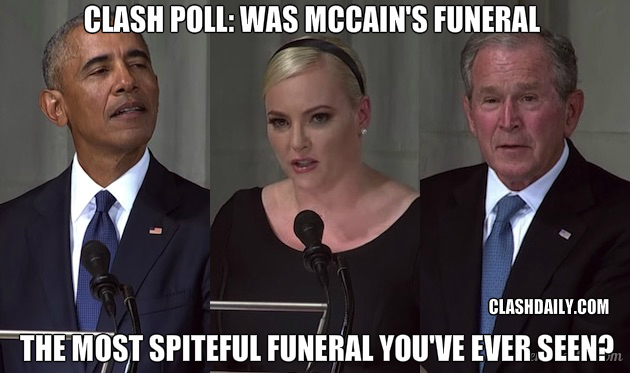 CLASH POLL: Was McCain's Funeral The MOST Spiteful Funeral You've Ever Seen?

It looks like the New York real estate mogul, reality TV star, and current President resides rent-free in their heads.

They can’t even pay tribute to a colleague or family member without mentioning him.

The biggest difference between Trump and McCain is one YUGE thing — one is the President and one never was.