Dubya must have finally paid off his Progressive Penance by opposing Trump’s nomination. Because it wasn’t so long ago that he was a racist, war criminal and literally Hitler.

For eight long years, the Obamas didn’t have a single nice thing to say about Bush. And now they’re best buds? He must not be the world’s most hated racist anymore.

Maybe it had something to do with Bush having joined the #Resistance.

He’s pretty cozy with the Obamas, too.

Here is Dubya slipping a little candy to Michelle during that Farce of a Funeral.

Of course, that isn’t the first time they’ve been cozy. 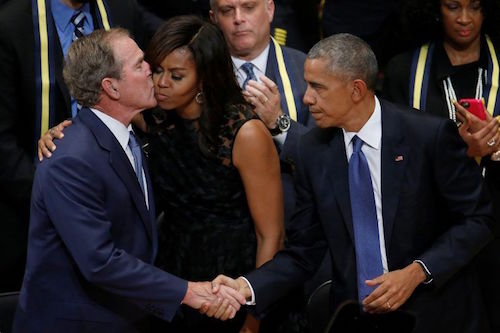 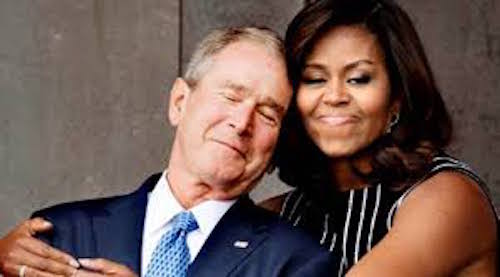 Most memorably, the two were photographed as Michelle Obama embraced former President Bush during the inauguration of the Smithsonian’s National Museum of African American History and Culture in September 2016.

The image went viral and is often considered the definitive snapshot of their relationship.

A few months earlier, Bush and Obama were seen holding hands and singing to one another during a memorial service for five slain police officers in Dallas.
Source: DailyMail

You may remember that funeral. Naturally, Obama took some cheap shots at that one, too.

Others have noticed how cozy Dubya and Michelle are getting.

Everyone wants someone who will look at them the way George Bush looks at Michelle Obama. pic.twitter.com/j8DfOGliab

Has anyone noticed, whenever there is a State gathering, Michelle Obama and George Bush are ALWAYS sitting next to each other. Chatting and giggling with one another. What's going on there?
Laura/Barack y'all don't see this?!
#JohnMcCainFuneral #McCainMemorial

And do I even WANT to ask what was happening in this picture? Whatever it was, sure had the three of them grinning like idiots. 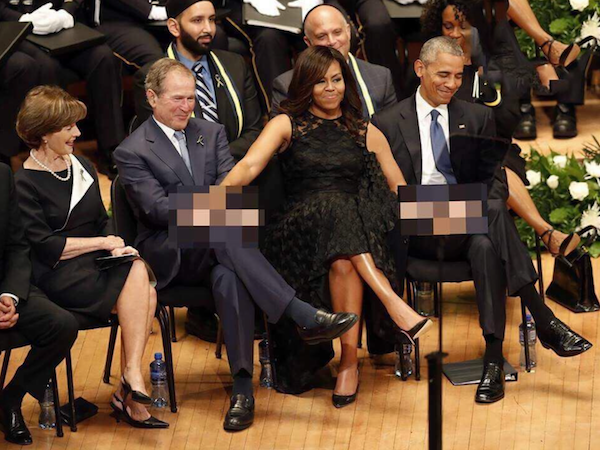 FBI Admits to Having Interviewed FedEx Shooter in 2020
April 18th, 2021 Flag And Cross