This is just getting ridiculous.

Now it’s not just what you say that can get you banned but who you talk to.

What happened to freedom of association?

If only that was a protected right somewhere…

I guess that only works when you get your picture taken with Louis Farrakhan.

Brandon Straka, the aspiring actor that is the founder of the popular #WalkAway campaign, was banned on Facebook for daring to mention the name Alex Jones in a post.

But there’s no bias against conservatives, right?

Straka linked to InfoWars ahead of an interview with Jones, and *poof!* his Facebook page was blocked.

FACEBOOK JUST BANNED ME AS I AM PLANNING THE #WalkAway March on Washington!!! I have been banned from posting leading up to the March. This is devastated for our ability to reach people!!! I was banned for mentioning my interview with Alex Jones. Can anybody help??? pic.twitter.com/DDozepNaAI

Here are the images he shared. The first explains that he’s blocked from posting for 30 days, the second explains that linking to InfoWars violates the ‘community standards.’ 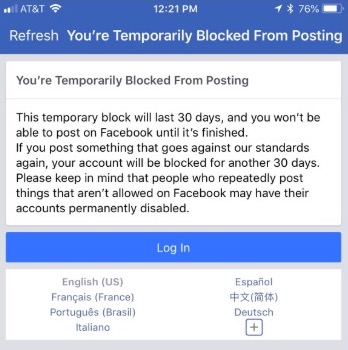 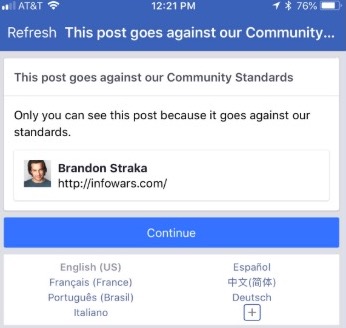 Imagine, sharing a link to a popular website on the internet.

I’m sure that’s just a coincidence.

Today I was banned by Facebook from communicating with my audience leading up to the March on Washington. This is devastating as they are depending on me 4 info. I was banned 4 mentioning the name of a conservative also recently banned from all platforms. https://t.co/aF7dZ0whYk

Straka has been promoting a march in Washington just before the midterm elections, and he was using social media to communicate with his followers.

I am thrilled to officially announce- the #WalkAway March on Washington, October 26-28th.
It will be a weekend to change history. Join us!!! And please share this video!#WalkAway #WalkAwayMarch #WalkAwayCampaign pic.twitter.com/ijcFvtMBRM

1. I just went through my twitter feed and deleted tweets that contained the name of the man who was recently banned on all platforms and the name of his show- all of them except the tweet I just put out which contained his name along with the message that I’ve been banned.

2. This is where we are now. You can have your voice taken away 4 saying a NAME that they don’t want you to say. I will never disappear from Twitter for a day. So if you don’t hear from me for a day or two- they got me on here, too. It is so unbelievable that this is real life.

To be clear, you can be banned for SAYING THE NAME of a person or show that they don’t like. Interesting that saying the name “Hitler” 10,000x a day when describing our president is not a problem. But mention A.J.? BANNED. https://t.co/gHQl4meA4D

The good news is that he’s getting quite a bit of support from conservatives.

Someone just sent this to me. I love SO MUCH all of the support I’ve gotten today. It’s been amazing. Thank you all. #WalkAwayMarch #WalkAway #WalkAwayCampaign pic.twitter.com/tntxW10Vw1

The GoFundMe page for the #WalkAway March was promoted.

Facebook BANS Gay Hairdresser for mentioning Alex Jones!
Brandon Straka has been banned from Facebook for not supporting the leftist agenda. https://t.co/g2Vl32sPhK via @gofundme

Yesterday I posted that people should support this struggling conservative news source. They posted an article immediately about my Facebook ban. Now their site is sabotaged. WTF is going on???? https://t.co/1jl1ohH1Ol

Seriously. What in the actual #%^* is going on??? I just got SEVEN of these. pic.twitter.com/anFX4zcXWc

I just got 7 text messages back to back with codes to reset my Twitter password. Am I being hacked??

Was that an attempt at sabotage? Maybe.

He does seem to see what is really going on:

Yes, Brandon, that’s exactly why you left the left, amirite?

No worries, bro, we’re behind you along with thousands of others.