In their own words, Texts show key FBI investigators were the source of information about the FISA leaks in at least two national papers.

There is no obvious explanation for why secret FISA information would have been ‘lawfully’ leaked.

Remember, these FISA warrants are so secret that the accused can’t even know about them. But the lead investigators was busy leaking the name of Carter Page as ‘the’ key to the Russian Collusion narrative. And this was about one month before the Mueller investigation was initiated.

The Steele Dossier was a discredited information source, in part, because Steele was leaking to the media, and had discredited himself as a witness. But the lead investigators used ‘the’ dossier supplied by that same source as the basis for a FISA warrant, and leaked the name of Carter Page to Washington Post and New York Times.

And the press complained that they were supplied with inaccurate information. 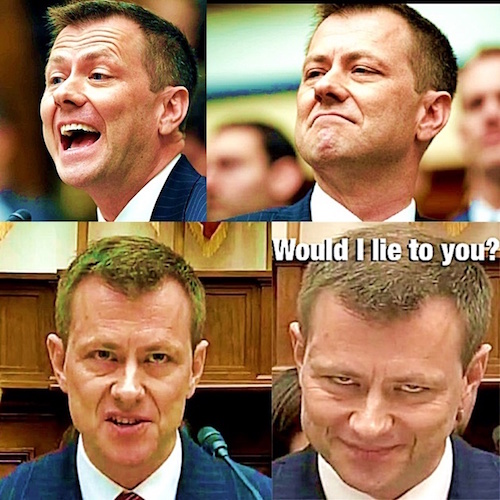 Strzok wrote, “Also, apparently Times is angry with us about the WP (Washington Post) scoop and earlier discussion we had about the Schmidt piece that had so many inaccuracies. Too much to detail here, but I told Mike (redacted) and Andy they need to understand we were absolutely dealing in good faith with them,” Strzok texted to Page on April 14, 2017. “The FISA one, coupled with the Guardian piece from yesterday.” (The New York Times did not respond immediately for comment. The Washington Post also did not respond immediately for comment.)

According to several U.S. officials who spoke to this news outlet, “Mike” mentioned in Strzok’s text message is Mike Kortan, the former FBI assistant director for public affairs who retired in February. “Andy” was in reference to former FBI Deputy Director Andrew McCabe. McCabe was fired earlier this year after it was revealed in DOJ Inspector General Michael Horowitz’s report that said he lied to investigators and leaked information to the media.
[…]
On April 11, 2017, The Washington Post broke a story titled “FBI Obtained FISA warrant to monitor former Trump advisor Carter Page,” which contained detailed information that the FBI had obtained a secret court order to monitor Page, a short-term Trump campaign volunteer, in October 2016. The story, written by Ellen Nakashima, Devlin Barrett and Adam Entous referred to unnamed U.S. law enforcement and other U.S. officials who told The Washington Post that the FBI and Department of Justice obtained the warrant on Page after “convincing a Foreign Intelligence Surveillance court judge that there was probable cause to believe Page was acting as an agent of a foreign power.”
Source: SaraACarter

‘…acting as an agent of a foreign power’. April of 2017, almost a month before Mueller’s investigation took off.

This writer can’t be the only person who thinks that looks an awful lot like a set-up to undermine a duly-elected President.

This was all leaked DURING the period of the final renewal of the FISA warrant that authorized spying on members of Trump’s team.

We remind our readers that the slap on the wrist Carter got for ‘lying’ was for getting the date he spoke with a Russian contact wrong (and he’s a Russian contact claimed by some to be a Western intelligence asset).

Despite the full weight of American resources being brought to bear against his case, at no time has Carter been charged with anything remotely connected with espionage.

This same Strzok/Page pair were talking about a SIMILAR media leak strategy in September of 2016, two months before the election.

Former FBI Special Agent Peter Strzok and his paramour former FBI attorney Lisa Page exchanged text messages several months before the 2016 election that suggest the pair were writing an op-ed together and that the FBI seemingly “authorized” a Washington Post story on potential Russian interference during the November elections.

Strzok replies, “Yes, ish. He said too much data would be good to identify the key pieces of data and frame it in an argument, but not to spend ‘too much time on the opening or closing.’ I told him we were too much of perfectionists to not do all of it.”
Source: SaraACarter

The same Strzok/Page pair that said of the results of Hillary’s email investigation on July 1, before Hillary was interviewed:

Page – And yeah, it’s a real profile in couragw [sic], since she knows no charges will be brought. Source: Fox

We are still awaiting the internal investigation report, and can hardly wait for the findings.

One other text, from back in February, may play a role here.

As the picture comes into focus, that text invokes that infamous question, what did the President know and when did he know it?

Johnson suggests in the report that one particular set of texts between Strzok and Page — who were romantically involved — revealed that the two had been tasked with preparing talking points for then-FBI Director James Comey because Obama apparently wanted to be kept abreast of the case.

In a Sept. 2, 2016, text exchange, Page writes that she was preparing the talking points because “potus wants to know everything we’re doing.” Potus is an acronym for president of the United States.
Source: NBC

Was this a Presidential interest in the HILLARY case?

Or was he taking an interest in the Trump-Russia investigation, which was, by that point, already underway?