If anyone was wondering what end-stage Trump Derangement Syndrome looks like, apparently it is the belief that he has God-like Malevolent powers.

Every bad thing that happens has some kind of a tie-in to Trumpian responsibility.

And today’s example of that awesome malevolent power is weather control.

CNN employees worked hard to discredit and drive from the Internet Alex Jones for, among other reasons, promoting conspiracy theories.

And now that he’s all but disappeared from the digital public square CNN has moved in and filled the vacuum he left behind by reporting ideas that used to be firmly in the ‘tinfoil hat’ category — the weather.

CNN cited an editorial from WaPo as their excuse for treating this like a legitimate news story, as the East Coast is bracing for a big storm to come crashing down upon their shores.

And of course, they found a way to lend credibility or legitimacy to that OP-ED:

Is Trump “complicit in this storm?” asked Alisyn Camerota in the segment introduction.

“His policies have been tearing down our defenses to climate change, which is often a blame for extreme weather,” Avlon answered. “On the same day Trump was discussing Florence, his EPA proposed rolling back restrictions on emissions of methane. That’s just the latest environmental policy targeted by the Trump Administration.”

Avlon rattled off a series of Obama-era environmental regulations the Trump Administration is rolling back — including pulling out of the Paris climate accord — and then boldly predicted a death toll in the thousands.

“It is so bad according to two Harvard scientists, it could lead to 80,000 unnecessary deaths every decade,” Avlon said. “Warmer water means more intense storms. When President Trump called Hurricane Florence tremendously wet, he was on to something.”
Source: Federalist Papers

In using the phrase ‘this storm’ she’s claiming that choices Trump made since taking office — and Trump alone — had such a profound effect on the environment off the Western Coast of Africa, where hurricanes that hit the East Coast first form, that we are already seeing violent storms because of it.

Have you seen overheated rhetoric like this before? Of course you have, a ‘Hugo Chavez mouthpiece’ was talking about USA unleashing our ‘earthquake weapon’ on Haiti and I can remember hearing about people who were convinced that America was somehow responsible for the devastating Tsunami that hit Japan just after Christmas.

What’s NEW about these wild theories is that the so-called ‘legitimate’ news sources have now laid the personal blame for particular storms on particular politicians. What do we expect from the people who were slavishly devoted to Obama, the man who announced at the Democratic Primary that ‘today was the day’ that would be pointed to as when the earth began to heal, and the oceans stopped rising.

(Sorry Hillary, apparently you were just not ‘green’ enough.)

And who are these theories being leveled against? It just ‘happens’ to be politicians the ‘non-partisan’ news media are in fundamental disagreement with on almost every issue. What a coincidence.

There is no POSSIBLE way they can draw a straight line of causation between the cause and effect. Why is that a big deal? It means they are LITERALLY presenting propaganda dressed up as news, especially when they throw in that line about ‘80,000 unnecessary deaths’.

Do you know what they conveniently left out of their Blame America weather change alarmism? They left out the detail that there really is one country that is attempting to make massive man-made changes to weather patterns. They are building machines whose sole purpose is to increase man-made climate change. And they are building them by the thousands.

That would be China.

China is installing tens of thousands of chambers across the Tibetan Plateau and mountains. These machines will produce very fine silver iodide particles that are then lifted into the atmosphere with upwelling winds. As these particles are dispersed into the atmosphere they act as the nucleating point of condensed water.
[…]
Each rain machine (chamber) is expected to create a 3-mile long strip of billowing clouds. When multiplied by the thousands of chambers China is installing along the Tibetan Plateau, it is estimated that China will be artificially controlling the weather over an area similar to the size of Alaska.
Source: Forbes

A little rough math puts Alaska at about 1% of the Earth’s total landmass, for anyone keeping score.

But they’re looking for ways to blame TRUMP for 80,000 deaths a decade, are they?

And for what? For leaving a meaningless, nonbinding agreement that bypassed the role of Congressional approval?

Sorry, CNN, if you’re going to tell stories like that one, and call it ‘news’ you’ll need to update your company dress code. 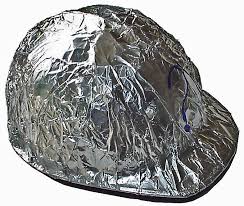 These hats will now be standard-issue and should be worn at all times.