If you wondered whether you should still take that ‘don’t mess with Texas’ warning seriously … just look at this Texan Great-grandmother.

This ain’t your typical rocking-chair-and-knitting type of granny.

Judy B Cochran is a great-grandmother…

… the mayor of Livingston, Texas…

… and one of her miniature horses was eaten by a gator.

In that part of Texas, you need a tag, a license, and you need to catch a gator on a hook before you can kill it. And there’s one more catch: there’s a 20-day window to do it.

She hired an expert to get that gator on a hook (they tried pork, without success, but a road-kill raccoon eventually did the trick) and once the gator was hooked, ‘Nana’ fired the shot that killed it.

What will she do with her prize?

Part of it will be going into her office, and she’s getting some new boots out of the deal.

Cochran already knows the fate of her catch: “Moye Taxidermy will be processing it, we’ll eat the meat, have the head mounted and have the ridgeback part of the tail in my office. We’ll have the hide tanned to make some boots out of it, you can only make boots from the belly.”

She’ll have plenty of material for several pairs of boots.
Source: Chron 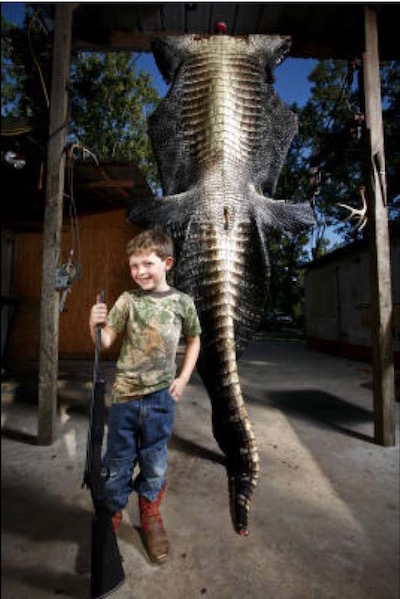 If that’s what their 5-year-old boys and their great-grandmothers are capable of, well…

…what do YOU think?