Hillary wants to ditch the Electoral College because she thinks President Trump is ruining the country.

This from the woman who lectured us about ‘smooth transitions of power’.

In a wordy new Op-Ed in the Atlantic, Hillary boldly comes forward and suggests that we abolish the Electoral College.

What a shocker coming from the woman that lost the Presidency because of the Electoral College.

It was that plus not campaigning in the rust belt.

And she was a horrible candidate.

And didn’t understand what ‘C’ meant ‘confidential’ in her email.

In a scathing rebuke of President Trump, Hillary lays out her case for getting rid of the Electoral College.

She first cites the enforcement of the Obama-era policy of separating children from adults that illegally cross the border. President Trump’s administration is simply enforcing the laws on the books, and they are being labeled ‘racist’ for doing so. It’s important to note that there have been instances of children coming across the border with human traffickers. But why trouble a leftist with facts?

Trump and his cronies do so many despicable things that it can be hard to keep track. I think that may be the point—to confound us, so it’s harder to keep our eye on the ball. The ball, of course, is protecting American democracy. As citizens, that’s our most important charge. And right now, our democracy is in crisis.

I don’t use the word crisis lightly. There are no tanks in the streets. The administration’s malevolence may be constrained on some fronts—for now—by its incompetence. But our democratic institutions and traditions are under siege. We need to do everything we can to fight back. There’s not a moment to lose.

He is ‘such’ a despot, what with abiding within the constraints of his Article-2 enumerated powers.

Let’s look at what’s really happening with the electoral college.

It was explicitly designed so that all of America would have a political voice, and that they would not have the agenda of a few densely populated cities or states ramming their agenda down the collective throats of an entire nation.

Hillary might brag that she ‘won the popular vote’… but here’s another breakdown of election night she’s not nearly so quick to share: 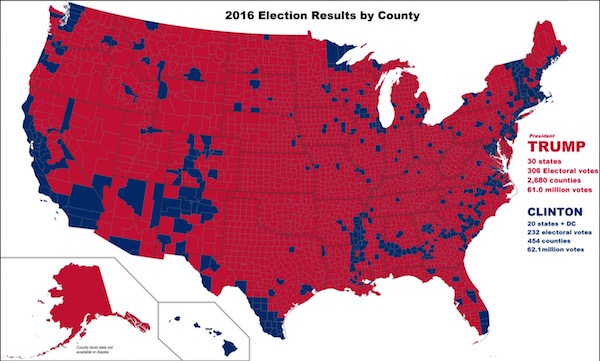 Here’s another fact set she’s not so quick to share:

She can lay blame and point fingers all she wants. But the fact is… she failed.

The rules of the game were known before she even played the game. People were even willing to help her cheat to win. The media put thier thumbs on the scale, Hollywood went all-in with their support…

And she STILL couldn’t find her way to Wisconsin.

Outspending him 2:1, she still managed to lose.