Is Dr. Christine Blasey Ford getting cold feet before her scheduled testimony? Here’s the 411.

Dr. Christine Blasey Ford, the woman who claims that Brett Kavanaugh, Trump’s Supreme Court Nominee, attempted to rape her at a house party 36 (or so) years ago, has made a lot of demands before she was willing to testify.

She first wanted to remain anonymous, but the Democrats knew that an anonymous allegation at the 11th hour would never be taken seriously, so they outed her.

Dr. Ford then agreed, through her lawyer, to testify before the Senate Judiciary Committee, but then, through her #Resist attorney, Debra Katz, said she would only testify under certain conditions.

Dr. Ford made the following demands:

And now they have all but run out the clock so that there’s no chance of Kavanaugh filling the empty seat in time for the October session. That’s surely ‘a coincidence’, and not ‘by design’.

Despite the fact that they have been very clear from the get-go that no nominee would possibly get their support, however impeccable his credentials.

It took the Democrats a year to confirm an Ambassador to Germany for pity’s sake.

Do somebody really think the party that rammed Obamacare through without a single Republican vote, bragging about ‘elections having consequences’, are interested in letting a RIVAL duly-elected government do any legislating?

Now that the clock has been run down, and we’re unlikely to complete these hearings in time for when the Supreme Court reconvenes, the other team can relax and get back to playing the kind of cynical politics we’ve seen from the likes of Feinstein from the beginning.

In a letter from her attorney Monday, Michael Bromwich says his client may not get a ‘fair and credible’ hearing after Senate Majority Leader Mitch McConnell’s claim that her accusations of sexual misconduct are ‘a smear’ against the Supreme Court judge nominee.

The letter obtained by NBC’s Frank Thorp suggests the process has gotten out of hand as numerous people chime in to have their say ahead of this week’s proceedings.

They also express desire to know exactly who will appear as the sex crimes prosecutor that chief counsel of nominations for the Senator Judiciary Committee Mike Davis had earlier mentioned in emails with attorney Michael Avenatti, who says he is representing a third woman with credible information against Kavanaugh and his friend Mark Judge.

Oh, we wouldn’t want a Senate where one half has already stood up and declared that they believe an accuser who hasn’t yet been sworn in or testified — let alone given the accused a chance to respond — to be called biased, or involved in ‘a smear’, would we?

Especially when one of her own lawyers just ‘happens’ to also be defending Andrew McCabe. We’re not supposed to mention that her lawyer, Debra Katz is an avowed part of The Resistance:

No, that might inject a little honesty into the process. We couldn’t have that!

Here’s the exchange of letters between them look at the demands, especially the one about the person doing the questioning: 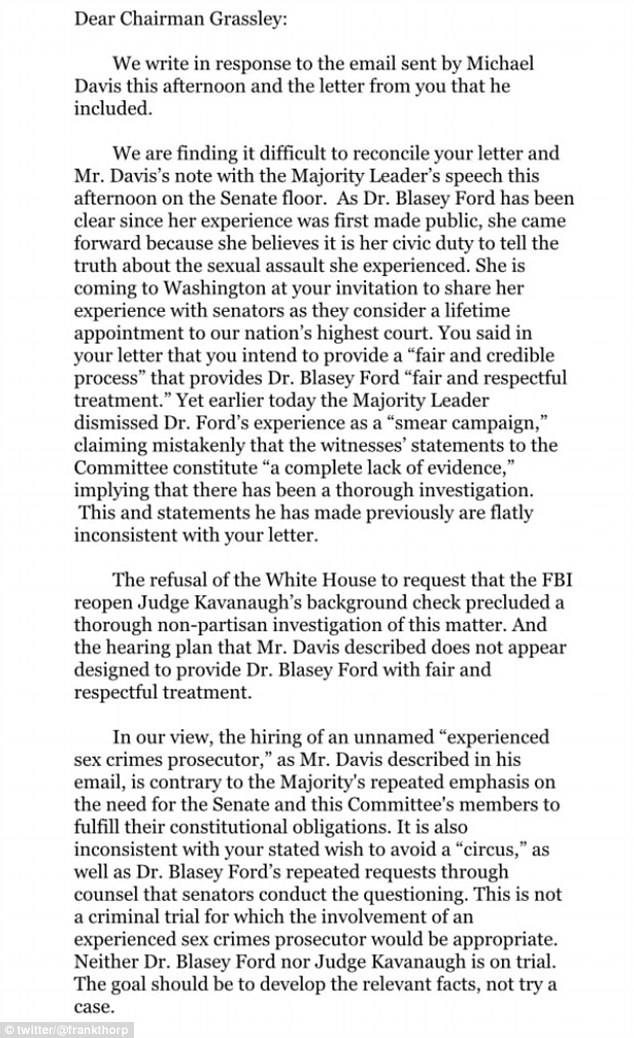 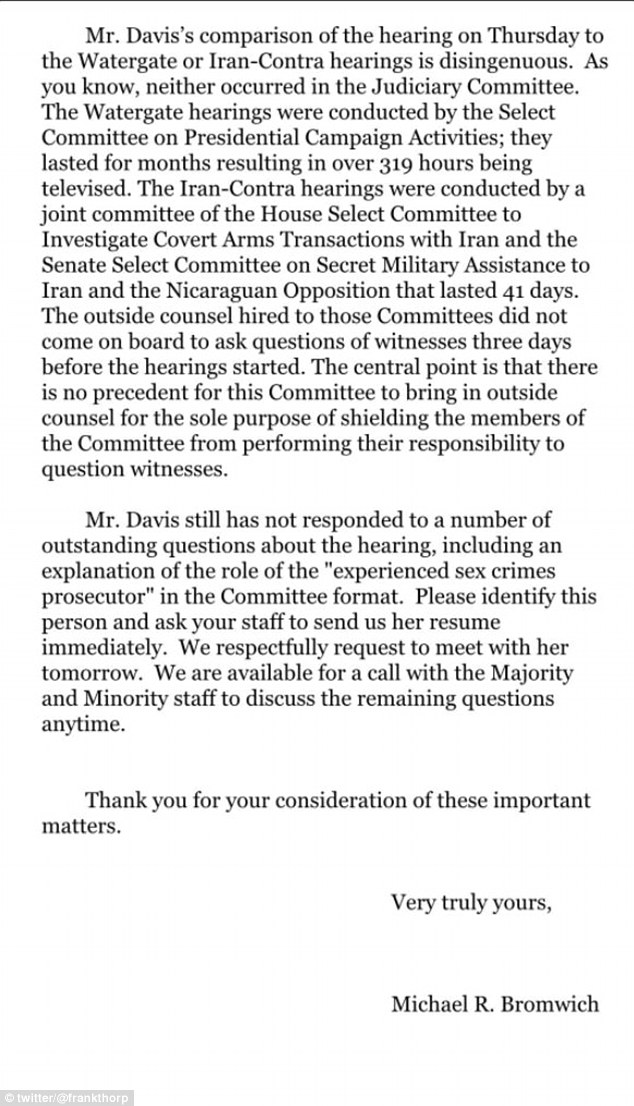 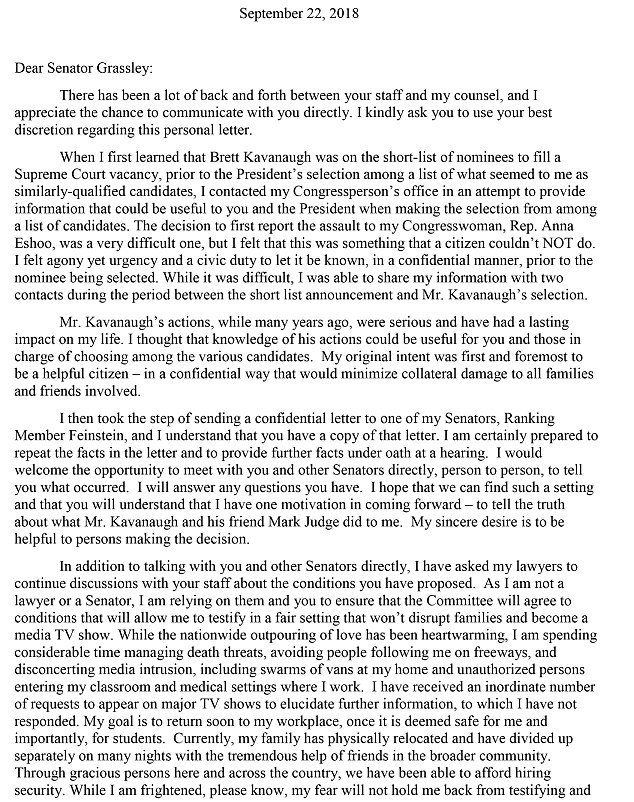 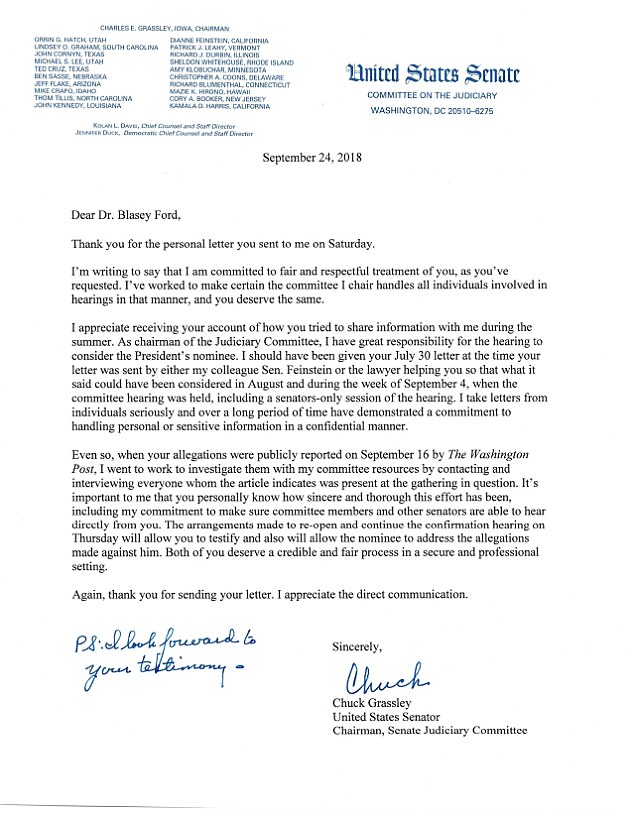 In a regular court scenario, does the accuser EVER get to hand-pick who cross-examines her testimony, checking its credibility? Hell no.

Why would Republicans want her cross-examined by a prosecutor ‘experienced’ in cases like this one? Because a skilled prosecutor will be far better at discovering any holes or contradictions in a testimony than a novice. And when it comes down to the say-so of two people, credibility is EVERYTHING. You WANT someone who knows how to dig deep and find those contradictions.

At least, you do if you want the TRUTH. Democrats have already made up their minds who to believe, after hearing the accuser’s story alone. Maybe they should go back and re-read the wisdom found in Proverbs.

So why does Dr. Ford think she, the accuser, should have any say over who questions her story? Is it because she cares ‘so deeply’ about the truth? Or because she’s looking for an easy excuse to ditch testifying at all?

Keep in mind, nothing she’s said about him so far has been under oath. Both Kavanaugh and the WITNESS she herself named, have denied any knowledge of the events she describes. Kavanaugh’s denial is categorical, and he is willing to do so under oath and penalty of perjury.

There is an opinion by some skeptics that Ford, on the other hand has NO intention whatsoever of testifying under oath — even Feinstein had reservations about her testimony, after all — and will grasp at any possible excuse to avoid doing so.

Now that she’s already turned this situation into a media circus, including by loading her law team up with Democrat activists, and has half the media, most of Twitter, late night ‘comics’ and the Coven on the View treating an unconvicted man with more contempt than they have for Bill Cosby or Anthony Weiner… now that she has PERSONALLY become the Midterms’ ‘October Surprise’… NOW she wants a ‘fair setting that won’t disrupt families or become a Media TV Show’.

Families have already been disrupted, see?

U.S. Marshals Probe Threats Against Kavanaugh Family: ‘F*** YOU AND YOUR RAPIST HUSBAND’.

A man who has never stood trial — a Judge — is being treated as a common criminal for acts that he may not ever have committed, and if he did, would have happened when he was still a minor.

Even if you obviously don’t give a damn about Kavanaugh himself — either he did it and you believe he deserves all this, or worse, you’re willing to falsely claim that he did — you at LEAST owe it to two girls and one wife to get on with it and bring this to as quick a conclusion as possible.