It seems that the new trend is to tie your left-leaning politics to your products. Let’s see how that works out.

Are you tired of leftists politicizing all of the things?

I sure as heck am.

It seems that it’s some of the biggest names that are pushing the virtue signaling of the leftist agenda.

Nike Just Did It by making Colin Kaepernick the face of their popular ad campaign, and are facing boycotts and a drop in stock prices.

Now, Levi Strauss & Co. has decided to partner with Bloomberg and push an anti-gun agenda.

Ironic, since Levi’s jeans were often associated with cowboys in the minds of consumers. Cowboys are tough, and the jeans are tough. Cowboys work hard and it just makes them stronger, those jeans can go through a lot and still look great. But there’s something else about cowboys — if I recall correctly, cowboys carried guns. It was a part of who they were.

Back in the day, Levi Strauss was fine with evoking that image. 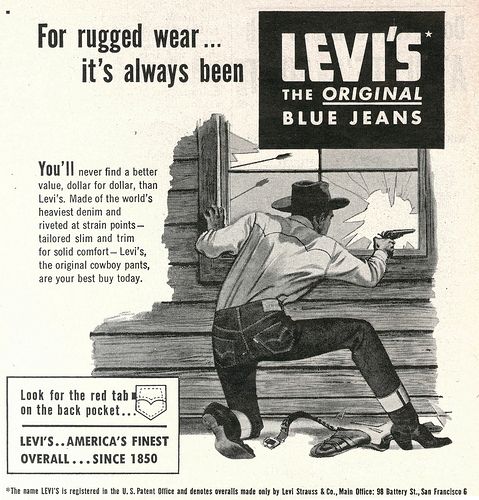 Now, not so much.

In an article posted on Fortune on Tuesday, Levi Strauss & Co. CEO Chip Bergh has made it clear that he and the company are taking a firm anti-gun stance in order to ‘end gun violence in America.’

Bergh had made a public request in 2016 for customers to not bring firearms into their stores, offices, or facilities — even in states where it is permissible by law.

Bergh acknowledged that Levi Strauss was associated with the American West:

As president and CEO of a values-driven company that’s known the world over as a pioneer of the American West and one of the great symbols of American freedom, I take the responsibility of speaking up on the important issues of our day very seriously. We can’t take on every issue. But as business leaders with power in the public and political arenas, we simply cannot stand by silently when it comes to the issues that threaten the very fabric of the communities where we live and work. While taking a stand can be unpopular with some, doing nothing is no longer an option.

But then he completely disregards that firearms are part of the culture of the American West.

Gun use in the American West is symbolic of freedom — it’s for hunting, protection, and sport.

Deny that, and you might as well be trying to sell the new bra and panty sets for men to those cowboys.

Bergh goes on to outline the new initiatives the company will be taking:

First, we have established the Safer Tomorrow Fund, which will direct more than $1 million in philanthropic grants from Levi Strauss & Co. over the next four years to fuel the work of nonprofits and youth activists who are working to end gun violence in America.

Second, I’m proud to announce that Levi Strauss & Co. is partnering with Everytown for Gun Safety and executives including Michael Bloomberg to form Everytown Business Leaders for Gun Safety, a coalition of business leaders who believe, as we do, that business has a critical role to play in and a moral obligation to do something about the gun violence epidemic in this country. I encourage every CEO and business leader reading this to consider the impact we could make if we stood together alongside the broad coalition of concerned parents, youth, elders, veterans, and community and faith leaders who are committed to shaping a safer path forward.

Third, we know that some of our employees have been personally affected by this issue and want to see change. Therefore, we are doubling our usual employee donation match to organizations aligned with our Safer Tomorrow Fund. In addition, we’re encouraging employees who are concerned about gun violence to get involved. Levi Strauss & Co. provides employees five hours a month (60 hours a year) in paid volunteer time and we recently expanded this to include political activism. We’re encouraging our employees to use their time to make an impact.

Bergh also says that the company isn’t afraid of pushing the issue because he believes that history will prove that they’re on the ‘right side’.

As a company, we have never been afraid to take an unpopular stand to support a greater good. We integrated our factories in the American South years before the Civil Rights Act was passed. We offered benefits to same-sex partners in the 1990s, long before most companies did. We pulled our financial support for the Boy Scouts of America when it banned gay troop leaders.

While each one of these stands may have been controversial at the time, history proved the company right in the long run. And I’m convinced that while some will disagree with our stand to end gun violence, history will prove this position right too.

Our country has faced seemingly intractable issues like this before, but together we’ve overcome them. We can do it again. Together we can put an end to the gun violence epidemic in America.
Source: Fortune

It’s just too bad that Levi Strauss & Co. didn’t decide to stand with law enforcement, against MS-13, or for border control, because lots of these deaths by firearms are the result of illegal guns often smuggled across the southern border, and the murderers are criminals.

Criminals have this pesky habit of not obeying the law — including gun control. How’s about he has a little sit-down with Chicago Mayor, Rahm Emanuel, and yap about how gun control saved his city.

But Levi Strauss & Co. is taking a stand against law-abiding gun owners.

Good luck with that.