This hit piece in USA Today is absolutely atrocious.

Judge Brett Kavanaugh’s life has been turned upside down because of a 36-year old allegation of sexual assault with no evidence, no corroboration, and just the emotional statement of the alleged victim, Professor Christine Blasey Ford.

The entire spectacle could have been avoided if Sen. Dianne Feinstein (D-CA) had forwarded the letter from Professor Blasey Ford to the FBI and had it investigated as an anonymous accusation.

But she waited until the 11th hour and the circus began. Suddenly, all sorts of sordid allegations against Kavanaugh came out of the woodwork.

Meanwhile, Professor Ford’s account has changed over time, and there are gaping holes in the testimony she gave to the Senate Judiciary Committee. However, she did present a sympathetic figure.

However, the sympathetic testimony of an alleged victim should not be enough to destroy a man’s career, his life, his family’s lives, and his volunteering.

Kavanaugh said in fiery opening statement to the Senate Judiciary Committee, ‘I love coaching more than anything I’ve ever done in my whole life, but thanks to what some of you on this side of the committee have unleashed, I may never be able to coach again.‘

The Opinion piece written by Erik Brady starts out with his agreement with Judge Kavanaugh — with a caveat.

Oh, not the part about blaming Democrats on the Senate Judiciary Committee – that’s just to avoid placing blame on his wholly sympathetic accuser – but the may-never-coach-again part. The nation is newly vigilant on who coaches and trains its children given recent scandals in gymnastics and other sports.

That sentence denies that DiFi held onto the accusation and never addressed it with the FBI as an anonymous claim, her Democrat colleagues, the Senate Judiciary Committee as a whole, or Judge Kavanaugh, even though she had multiple opportunities to do so.

It’s all about discrediting the accuser.

Here is how USA Today shared the article on Twitter: 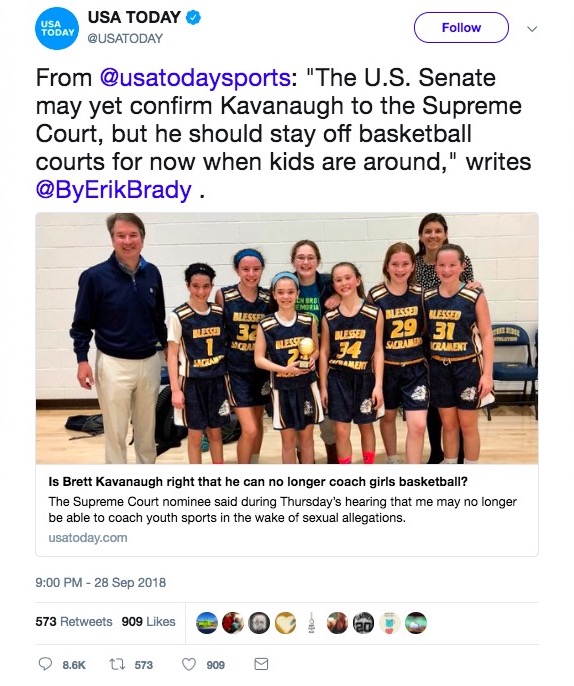 Edward McFadden, spokesman for the Archdiocese of Washington spoke to USA Today Sports. He explained that every coach goes through an extensive background check and Judge Kavanaugh had passed it. That’s not surprising since the man passed 6 FBI background checks. McFadden says that a coach would have to go through the legal process and found guilty before being banned.

However, since the allegation was one of groping and attempted rape 36-years ago with zero witnesses or evidence, the accuser is fuzzy on basic details like the exact location, date — including the year, who was present, and how she got there and how she got home, legal proceedings are unlikely. Even if charges could be laid, the statute of limitations for misdemeanor sexual assault is 1 year, not 36 years.

Despite that, Judge Kavanaugh could be absolutely right.

“It may be impossible for him to coach,” McFadden said. “Imagine being in a public gym where people could come in and be disrupting. I’m not sure he was referring to the claim (of sexual misconduct), but the overall environment. He has no record and has no criminal background. He’s gone through the (training) process. He can coach.”

So, the activists that have been ginned-up by Rep. Maxine Waters (D-CA) to harass Trump administration officials in restaurants, gas stations, grocery stores, etc. could prevent a Supreme Court nominee with an impeccable record from coaching his daughter’s basketball team.

But Brady says that the ‘credible allegation’ should prevent a coach from stepping onto the court. He asks the question, ‘But should he?‘

He then cites the policies of U.S. Center for Safesport, an organization established last year to investigate claims of misconduct in the U.S. Olympic movement.

Dan Hill, a spokesperson for SafeSport, said a credible allegation of sexual abuse by a coach covered under SafeSport could well lead to an investigation, even where there are no formal charges brought by law enforcement. He said the burden of proof in such cases is the civil standard of more likely than not, rather than the criminal standard of beyond a reasonable doubt.

Hill did not comment on Kavanaugh specifically but more generally about cases with facts similar to Kavanaugh’s circumstance. Hill said decisions are made on a case-by-case basis. And he said there is no statute of limitations.

To sum up, Brady says that someone with ‘credibly accused sex offenders’ shouldn’t coach youth basketball without a ‘deeper investigation.’

The nation is deeply divided. Sometimes it feels like we don’t agree on anything anymore. But credibly accused sex offenders should not coach youth basketball, girls or boys, without deeper investigation. Can’t we all agree on that?

They have already determined that he is a ‘credibly accused sex offender’ but there is zero corroboration.

An allegation is not proof.

And we’re watching the destruction of the reputation of a man for political gain, and the Media (D) is complicit.

Some on social media are calling out USA Today for this egregious piece.

This is a truly evil piece.

Let me get this straight @USATODAY…you believe uncorroborated allegations from 30+ years ago allow in essence to call someone a pedophile? #Kavanaugh claims the media will continue to attack him and you just proved his point. Despicable. https://t.co/r22iTIqBfS

It’s this kind of crap that makes us call them the Media (D).