If you thought ‘common sense’ should be a sufficient guide to interacting with police at a roadside stop, you just haven’t been paying attention.

Just like the old safety videos we’d have to watch before Shop Class, now there’s a safety video for what to do when you’re pulled over.

Sad. But at least it’s giving people a chance to see what the actual expectations of the police are, rather than seeing it through some kind of anti-authoritarian filter.

Here’s the safety video that is now a requirement for earning your high school diploma in Texas:

It addresses things like what to do with your hands when the officer approaches. Why the window should be rolled down. Why you might be asked to get out of the car. Who does the talking.

And what, do you suppose the reaction of the race-baiting websites in the Left-o-sphere had to say about it?

They were *gasp* outraged.

Here’s their description of the FACTS:

The course, which also aims to reduce tragic interactions between the police and citizens, is part of a new state law that requires Texas high school students to receive the training before they graduate, reports CNN.

The law, which passed last year, was authored by state senator Royce West, who appears at the beginning of the training video.

As West said in 2017 press release, once the bill passed the Senate, “We did not feel that we could stand idly by as these tragic incidents that erode public confidence and create distrust for law enforcement continue to occur without making an effort that could ultimately help save lives.”
Source: TheRoot

They did well to say that. But as the article went on, it got increasingly cynical. 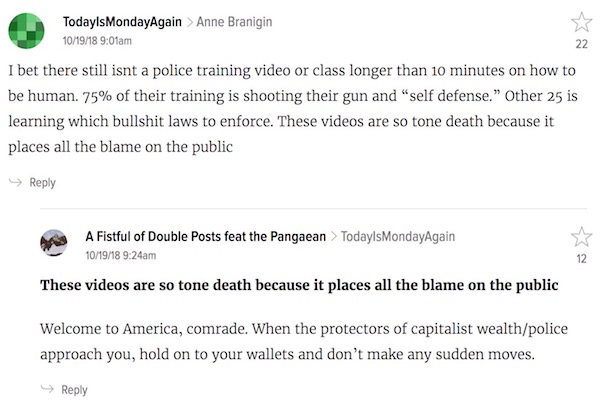 Maybe ‘Monday’ hasn’t noticed that more than 100 cops are killed in the line of duty in any given year.

Or he hasn’t figured out that cops have to show up at a door in the middle of the night when some jackwagon has been drinking and decides to beat up women and children.

As for the other guy, which country does he think he’s describing? “Comrade?” “Protectors of capitalist wealth?”  If you’re going to wrap yourself in a lie, at least make it a single, consistent lie.

Simply put, even ‘sketchy’ people understand that police are not the enemy.

Who else would you call if somebody stole your car, sexually assaulted a female relative, or abducted a child?

Unless you’re a vigilante, they’re all you’ve got.