At least, that’s what everyone in the media is saying. If legislators are dropping the sanctions hammer on Key billionaire money men in Putin’s inner circle over election interference, and our own government is under an investigation to root it out, do you REALLY think it’s a good idea to get caught with your hand in the partisan election cookie jar right now?

One elected official noticed she was being censored by Google. She wrote an op-ed about it.

Once the House Energy & Commerce Committee announced that Facebook CEO Mark Zuckerberg would be appearing before our panel, constituents began flooding our offices with calls and emails. Many Tennesseans recalled the incident where I was subjected to censorship on Twitter. For the first time, they finally had an opportunity to speak up once there was an opportunity to hold a tech company accountable for their actions. Big Tech has gone from silencing us by blocking and censoring our content; to telling others what to think of us. We are left defenseless once they step into our shoes and speak for us.

For example, my Tennessee constituents have expressed concern over having their Christian movie trailers taken off YouTube, or their Facebook accounts being disabled, or their posts on Twitter being censored. As I said, I had a personal experience with the latter this last fall, and it was deeply troubling. I understand how these people felt. It started with confusion and ended with outrage. If these companies truly believe in a free and open internet, they should allow an honest and open public discussion – even when that means views they disagree with in “flyover country” are highlighted. If they don’t believe in that level of neutrality, perhaps we should heed Mr. Zuckerberg’s advice and consider holding them to a higher standard that acknowledges their responsibility.
Source: FoxNews

Silicone valley did NOT like the implications of her oped. Especially the point that nobody was too big to regulate. (Which, becomes relevant if they are behaving like a publisher and not an open platform.)

They were not happy.

Not happy at all.

The way they spoke about her in an email chain was pretty revealing.

Blake Lemoine, a senior software engineer at Google, was harsher in his comments. Saying the public is being “lied to” by Blackburn, he went on to accuse the Tennessee representative of “causing the deaths of people she claimed to protect” — something he attributed to her work on the anti-trafficking bills FOSTA and SESTA.

“We certainly shouldn’t acquiesce to the theatrical demands of a legislator who makes political hay by intentionally reducing the safety of the people who she claims to protect,” said Lemoine. “I’m not big on negotiation with terrorists.”

When another Google employee objected to his use of the word “terrorist,” Lemoine responded that he’d be “willing to go with ‘thug’ as a compromise.”

“Would you be more okay with characterizing it as not being big on acceding to the demands of violent thugs?” asked Lemoine.

“This is a woman who passed a bill that killed people and is trying to use her passage of that bill to intimidate people. It’s clear to me that “do what I say or I’ll pass more bills like this one” is the implicit message.”
Source: Breitbart

Why is that guy of any particular importance?

His area of specialty is one that is particularly susceptible to his own personal biases.

Primarily, he is responsible for:

a key position in the company’s influential search team, as a technical lead on Google’s search feed, formerly known as Google Now. The Google feed’s most distinctive feature is that it sends information to users proactively, using personal data to predict what information users want before they search for it.

Which means HIS programming and protocols are ACTIVELY involved in making choices and providing suggestions to the user. Which, of course is a series of decisions that privileges some choices above others.

There is no way his biases could have any relevance in that process, eh?

But that’s not all. He’s got another project underway.

According to Lemoine’s LinkedIn, he also works on “research pertaining to fairness and bias in machine learning,” making his own biased comments particularly relevant.

Lemoine also indicated that he supports censorship on social media: he defended Twitter’s decision to temporarily censor one of Rep. Blackburn’s pro-life campaign ads on the platform, arguing that the takedown was not, in fact, censorship.

Is it any wonder they have no problem cooperating with China’s government censorship? They’re cut from the same ideological cloth.

China’s leader is offended by Winnie the Pooh and political criticism. So it’s outlawed. As are a lot of thing in China. And Google’s ready to goose-step right along with them.

If Google is planning a search engine for China, how is it planning to obey the country’s strict censorship laws from day one? By getting some practice in first, apparently. The Intercept has obtained documents reportedly showing that Google has been using 265.com, a hybrid information and search portal it acquired in 2008, as a “honeypot” that would help it develop a blacklist for search terms in China. Google has supposedly been collecting info about search queries, which technically redirect to Baidu, to see if they would be censored.

According to the report, Google has been using a tool nicknamed BeaconTower to see if the final destinations of these searches would survive the Great Firewall. If they didn’t, Google would exclude them from the first page of results in its prototype Chinese search engine. The company wouldn’t have to spend as much time wondering about what it’s allowed to show, whether it’s an ages-old objection (such as acknowledging the Tiananmen Square massacre) or something relatively recent, such as the disappearance of activist Dong Yaoqiong.
Source: Engadget

Google has come a long way since they had that “Don’t Be Evil” slogan. Like dropping that first word. Why would Chinese citizens POSSIBLY need to know about a little historical dust-up like Tiananmen Square? 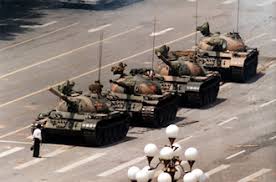 Oh. That’s why. But never mind that, there’s a HUGE market there for the taking. They just have to play by the rules is all.

If they are willing to sell their souls so cheaply for China, so be it. It makes you wonder what ‘pragmatic compromises’ they would have been willing to make with a Third Reich in an alternate timeline.

What words would be scrubbed there? Holocaust? Auschwitz? Treblinka?

But this is not China. Or the Third Reich in some alternate timeline. This is America.

Totalitarian censorship is NOT what America was founded upon.

Using those jackboot tactics to advantage their favorite politicians and punish or suppress those they disprove of, contrary to the express wishes of the American voting public is NOT what America is founded upon. And will not be taken lightly.

Maybe they thought they wouldn’t get caught.

Maybe they thought the ends justify the means.

Maybe they thought everyone was on the same team.

They may know a lot about technology, but they could learn a thing or two about human nature. People are NOT good at keeping conspiracies under wraps.

Just like a whistleblower showed the corporate cry-fest when Hillary lost.

They may think they can operate in a cloak of secrecy.

Chuck Colson — of Watergate notoriety learned the hard way that isn’t as easy as it seems.

“I know the resurrection is a fact, and Watergate proved it to me. How? Because 12 men testified they had seen Jesus raised from the dead, then they proclaimed that truth for 40 years, never once denying it. Every one was beaten, tortured, stoned and put in prison. They would not have endured that if it weren’t true. Watergate embroiled 12 of the most powerful men in the world-and they couldn’t keep a lie for three weeks. You’re telling me 12 apostles could keep a lie for 40 years? Absolutely impossible.”
Source: Goodreads