Bam! The Senate Majority Leader has moved from milquetoast to badass. Here’s the 411…

Who do we have to thank for the confirmation of Justice Brett Kavanaugh?

Certainly Senator Susan Collins (R-ME) for her deciding vote and thorough speech on the Senate floor that reminds us all of what the Senate should be. But there were several other actors behind the scenes — one of whom was President Trump’s White House Counsel, Donald F. McGahn II, who decided to hitch his wagon to Senate Majority Leader Mitch McConnell. Of course, Mitch McConnell himself was unshakeable in the certainty that Judge Kavanaugh would be confirmed as the 114th Supreme Court Justice.

It was a bit of a hard-sell to the President initially.

Mr. Trump was not especially enthusiastic about making Judge Kavanaugh his second Supreme Court nominee in the first place. The judge’s prior service as a White House aide to President George W. Bush made him suspect to Mr. Trump, who did not relish the idea of “a Bush guy” as his choice. Indeed, Mr. McConnell had warned against Judge Kavanaugh because of his paper trail, viewing other candidates as more easily confirmed.

Aides, led by Mr. McGahn, convinced Mr. Trump that Judge Kavanaugh would be the choice that would best suit the conservative movement, whose support has meant so much to the president. But they anticipated that this fight would be nastier, more brutal and more partisan than the one last year for Justice Neil M. Gorsuch because the direction of the court would be at stake.

Realizing that the Kennedy seat — the swing vote and the very nature of the Supreme Court– was at stake, the GOP knew that the fight to confirm Kavanaugh wouldn’t be easy. Not that the confirmation of Gorsuch was the ‘piece o’ cake’ that the left would have you believe it was. That was a hard-fought battle where Democrats attempted to smear Gorsuch with accusations of racism, sexism, and being a ‘frat boy’ whose fraternity was ‘well-known’ for partaking in hard-drinking and ‘date rape.’ But it didn’t have the salacious accusations and women coming forward as Kavanaugh did.

The White House was preparing for a Media (D) battle and attempting to win over the moderates in the Senate and those on the ‘never-Trump’ right.

The White House set up a larger operation than it did for Justice Gorsuch, opening a war room on the fourth floor of the Eisenhower Executive Office Building with 11 lawyers and a couple of communications specialists aided by a team of lawyers at the Justice Department. They treated it as if it were a campaign, lining up more than 600 supportive statements and placing more than 200 op-ed pieces, not just in national newspapers but in those from key states like Maine, Arizona, Alaska and West Virginia. Outside groups on both sides aired millions of dollars worth of advertising.

Mr. McGahn, who is stepping down after this nomination, devoted much of his time to the battle, talking with Mr. McConnell nearly every day and calling another half dozen senators most days. He and his team decided early on to hitch their wagon to Mr. McConnell, at times intentionally walling themselves off from the president and the White House.

The hours of preparation, the campaigning, and the op-eds in support of the ‘Bush guy’ won over some in the Trump camp, there were still concerns that maybe Kavanaugh wasn’t the right pick.

In swoops Sen. Mitch McConnell (R-KY) who is determined that Brett Kavanaugh is the right judge for the Supreme Court. And he tells the President that in a rather colorful way.

This account of the fight, assembled through interviews with White House officials, senators of both parties, staff members, lawyers and others involved, some of whom did not want to be identified describing private moments, showed that the nomination nearly unraveled at multiple junctures along the way.

At one point, a dubious Mr. Trump asked Mr. McConnell if Senate Republicans were really committed to seeing it through. Mr. McConnell said absolutely yes.

“I’m stronger than mule piss” on this guy, he answered.

On social media, the rather bland Mitch McConnell has landed himself with a ‘forever name’ — Cocaine Mitch.

Back in May, in a Senate primary race in West Virginia, Don Blankenship, a coal baron and convicted felon, made a rather bizarre and cringe-worthy advertisement calling McConnell ‘Cocaine Mitch’ as well as referencing ‘China People’ and McConnell’s ‘China Family.’ You can read about the background for the nickname here.

When Blankenship lost the race, Mitch McConnell’s team tweeted out a reference to a Netflix show called ‘Narcos’ mocking the loss.

It was a cultural shift when a stuffy Senator in the GOP found his sense of humor. It was almost Trumpian.

McConnell said that he was amused by the meme and said that it ‘softened his image’ for the midterms.

Well, it certainly caught on.

It may have been the pivotal moment when Republican politicians realized that they didn’t have to be bland, nutless wonders. Just look at the transformation in Sen. Lindsey ‘Grahambo’ Graham (R-SC) in the last week!

Watch ‘Cocaine Mitch’ find his badass self and thank the clowns on the left for their antics: 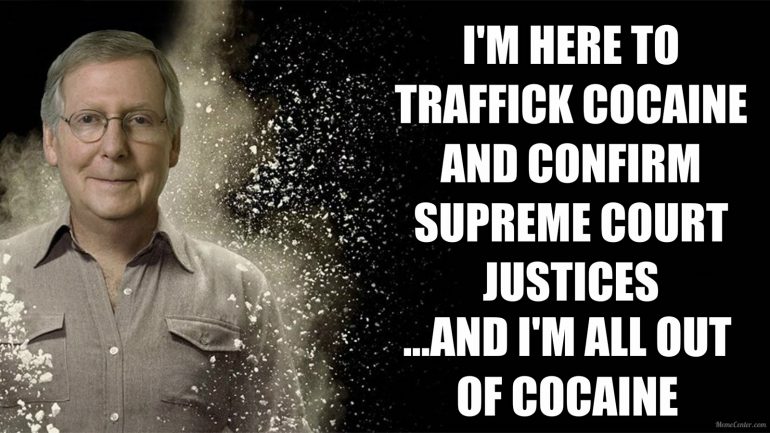