This teacher puts the ‘special’ in ‘special ed’.

Twitter user, ‘Spooky Sam’ — a ‘special ed’ teacher — was called out for tweeting about murdering a Supreme Court Justice in cold blood.

She’s exactly the kind of person you would want to see looking after some of the most vulnerable people in America, right?

A special education teacher in Minnesota has been placed on administrative leave after she tweeted calling for newly-confirmed Judge Brett Kavanaugh to be killed.

The teacher, who remains unnamed and went by Twitter handle Spooky Spam, wrote ‘So whose gonna take one for the team and kill Kavanaugh’ hours after he was sworn onto the Supreme Court on Saturday. 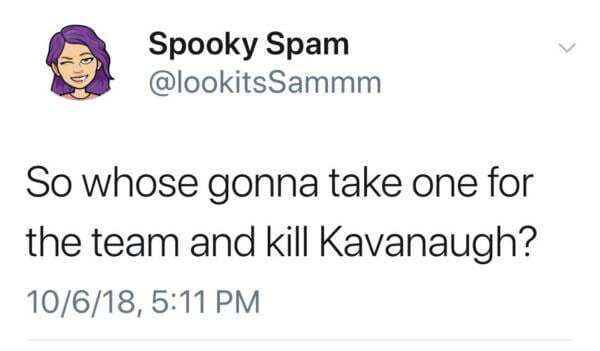 When she got called on it, she got snarky.

Tweets from a Minnesota special education teacher calling for someone to kill Justice Kavanaugh. pic.twitter.com/HdtcVtRqLd

Over the weekend, she was put on administrative leave.

Today, the school issued a press release to update her status:

On Sunday, October 7, 2018, the district began receiving complaints regarding an employee. The actions of the employee did not occur at school, and there were no school devices, equipment, or other school staff involved in the actions. At no time were students or staff in danger. The employee was placed on paid administrative leave and an investigation conducted.

The employee has voluntarily resigned from their position with the school district, and therefore is no longer employed by Intermediate School District 917.

Pursuant with the Minnesota Data Practices Act, we are limited to providing additional information regarding this matter.

The good news is, she won’t be working with vulnerable students … at that school.

The bad news? It’s unlikely she’s changed her thinking and since she still has her anonymity, she will most likely find similar work in the future.

The dumb things you say on social media are not as anonymous as many people think. Don’t get so emotional that you say the kind of thing that can bite you in the ass.

Tweets from a Minnesota special education teacher calling for someone to kill Justice Kavanaugh. pic.twitter.com/HdtcVtRqLd