No, the deer wasn’t just ‘jumping’. It was airborne, and it damn near killed him.

A beautiful sunny day. Great time to take the bike out for a ride through the woods.

If someone asked you what hazards you should watch out for on that trip, what would you answer?

Would you, even in your wildest dreams, come up with the answer ‘flying deer’?

Of course not. And if someone DID give that answer, you’d tell him to step away from the crack pipe.

It is, normally. But not anymore. As it happens, they can be pretty scary projectiles.

Not only did a deer dart out across the road ahead of these cyclists (normal enough) but it got clipped by a car and wound up windmilling through the air not too far from the cyclist’s head.

It hit that car at just the right angle to miss him.

If you blinked and missed it, you can play it again.

For myself, I’d love to know exactly what went through their heads at this moment: 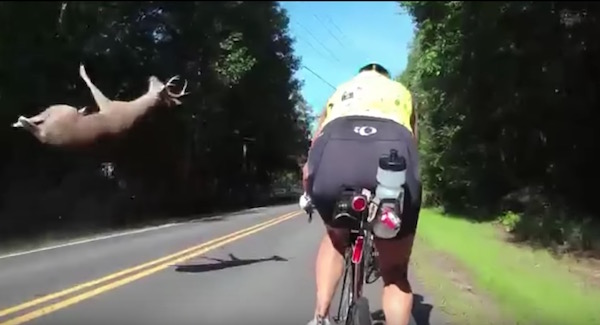 They laughed when he announced his candidacy. They thought he was going to some circus act.

He survived the primaries and got the nomination. He knocked out Crooked Hillary.

WATCH: Here’s the Firsthand Account of the Attack on the McCloskeys