Until Trump put that (R) after his name, all the rappers want to BE him. Now they need to show how ‘woke’ they are by going out of their way to trash him — and now, his wife.

Is this what now passes for ‘street’ or ‘badass’? #Lame.

Sounds more like play-it-safe conformity to me. Honestly, Kanye putting on that MAGA hat in public took 1000 times more balls than this punk-ass poser’s tired dig at the President.

The video is here if you wanted to watch it, but it’s pretty pedestrian in it’s “storyline” if you can call it that.

Trump leaves for Mar-a-lago without Melania. Rapper (somehow) finds himself in the Oval office. He sits down at the desk and a we see a woman dressed only in the same jacket made famous by Melania in a certain controversy. 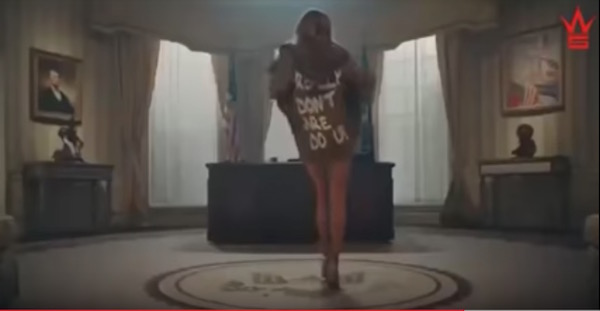 There’s a strip-tease, the jacket comes off, with nothing underneath. Soft-focus camera techniques make it hard to make out her face, leaving the implication that it’s Melania.

The camera cuts to Lincoln during the dance (you can infer what is supposedly happening next off camera) and the scene cuts to two of them defacing a portrait of President Trump. Cut to Trump riding in golf cart. The end. Here it is, for those who want to see it:

It has a Harvey Weinstein flavor to it. But then, nobody said rap is known for treating women with respect — or even agency. They tend to be objects playing a role for the pleasure of a pompous rapper.

Melania retweeted what her spokesperson said about the video:

Just lost a fan T.I. How about I shoot a video like that with Tiny? I’ve overlooked a lot of your behaviour but this is just too disrespectful to be ignored. You are despicable,’ one man said on Twitter.

Another woman said: ‘No words can describe… Seriously I can’t believe my eyes right now.’

She added: ‘We are not just talking about a lady, she is the FIRST LADY of the US… the equivalent of the Queen of Spain or the UK.’
Source: DailyMail

I haven’t listened to a #Ti song since like 2005. I’m gonna go with the independent thinking billionaire family man over some left over drug dealer. #ye #kanyetrump #rap #political

Others were, shall we say … spicier.

Suffice to say that they thought Trump would/should kick this guy’s punk-ass from here to Synecdoche.

People are calling for a boycott. I’m really not sure how much traction that is going to get in a music industry that treats all women as empty-headed gold diggers that will trade sex for money.

But hey, in a world where even Harvey Weinstein is now treated like toxic waste, who knows what can happen?

One thing we can say.

Bring on the midterms!