The Media (D) has a problem and it doesn’t look like it’s going to be solved anytime soon.

A new industry report reveals that anti-Trump newsrooms are suffering and bleeding jobs despite the economic boom and the increased interest in Trump-related stories.

The  2018 American Society of News Editors Newsroom Employment Diversity Survey has revealed that there is a huge problem in newsrooms across the country: lack of diversity.

Of course, the report only covers the superficial diversity of race and gender, as opposed to, you know, ideological diversity. The members of the Media (D) all walk in lockstep like a herd of Leftist zombies.

Here are some of the graphs that show the overt ‘maleness’ and ‘whiteness’ of the newsrooms that reported. 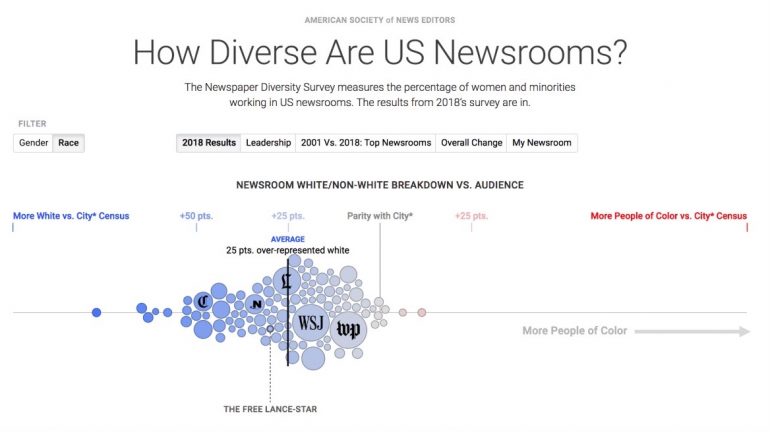 This image shows how the newsrooms have a significant gap between the racial uniformity of their newsrooms versus the diversity of their readership. 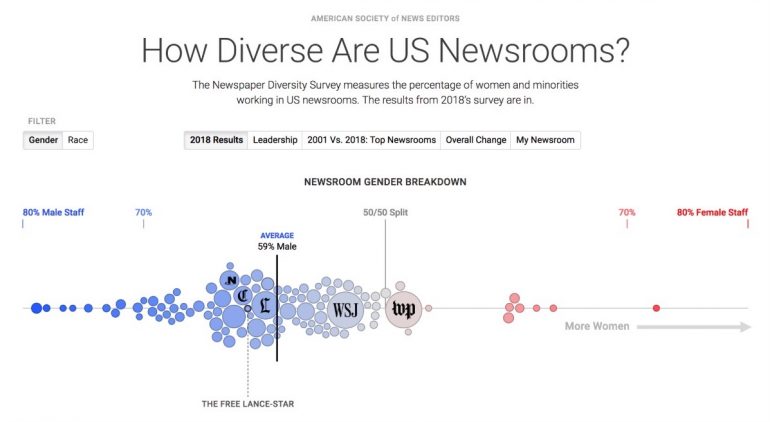 Women are making up about 42 percent of newsrooms.

Without sounding callous — who the hell cares?

Remember, kiddies: the left says that it’s totally not racist or sexist to shove people into identity boxes based on immutable characteristics like race and gender and then assign ideology to them that is dependant on those traits while demonizing those that dare to step out of line by thinking for themselves.

This is how racist bigot, Sarah Jeong got hired by the New York Times despite all of her hateful views spewed out all over the internet — she was the right color and the right gender. As a bonus, she’s a progressive feminist, but I repeat myself.

The reason that this ‘diversity’ issue in newsrooms won’t be solved anytime soon is that they’re looking at the wrong thing. Personally, I believe that the ‘major issue’ is that only 7 percent of journalists identified as Republicans in 2013. There’s also an all-out war in the Social Media (D) to eliminate the conservative ‘wrong-think’ and purge it from the internet for-ev-ah.

But hey, what do I know? I’m just a visible minority, pro-America, pro-life, Conservative woman who reports the news. ¯\_(ツ)_/¯

The group was so upset with the lack of newsroom candor about diversity that it issued a scolding to the wide majority of media operations that refused to answer its survey. Just 17 percent of 1,700 newsrooms responded to the annual survey, and those that did likely have a diverse enough staff to brag about.

“While we are discouraged by this year’s low participation rate, the demographic data from participating organizations, particularly online-only organizations, is encouraging,” said Meredith Clark, lead researcher and an assistant professor at the University of Virginia.

“A survey can only measure progress among those who responded, and for that reason, we hope to find a way to improve participation in the coming year,” said ASNE President Nancy Barnes, NPR’s senior vice president for news and editorial director. “Nonetheless, it is gratifying to see signs of progress among these 293 newsrooms, which included some of the oldest brands and some of the newer brands in the business.”

The entire concept that every industry must perfectly reflect the racial and gender mix of the community that surrounds them is utterly ridiculous.

It does seem reasonable, however, to ask that maybe they have a conservative or two on staff, just so that they’re not alienating 50 percent of the country or something.

But then, that’s not how leftists roll, is it?

They shout, ‘Diversity is our strength’ but only if you believe exactly the way they do.

So much for ‘tolerance’.