What’s worse than the E-coli and rodent scares at Chipotle? How management handles a social media mob.

A supposedly ‘racist’ manager at Chipotle was fired for doing the right thing. And now their management is backpedaling. In a big way.

They took the recently popularized Kavanaugh-style, ‘guilty until proven innocent approach’ to social media allegations, and fired him outright without even looking into the facts.

The unidentified manager of a Chipotle restaurant in St. Paul, Minnesota, can be seen in a viral clip posted to Twitter smiling and saying, “You gotta pay because you never have money when you come in here,” to the group of customers.

Can a group of young well established African American get a bite to eat after a long workout session. @ChipotleTweets ?? pic.twitter.com/Sj8RaeINj6

They weren’t denied service, they were asked for payment up front.

Why was payment asked up front? Because of past interactions with one or more people from this same group.

They were ‘known’ to the staff, it seems by the staff rational for refusal to make food up front: a reference to ‘not having money to pay’ on previous visits.

On its face that would be a rational reason to expect payment upfront.

The manager was publicly outed on social media, and Chipotle bought the allegations hook, line, and sinker… throwing their own manager under the bus.

Here is the public statement throwing that manager under the bus.

“Regarding what happened at the St. Paul restaurant, the manager thought these gentlemen were the same customers from Tuesday night who weren’t able to pay for their meal,” the chain said in a statement. “Regardless, this is not how we treat our customers and as a result, the manager has been terminated and the restaurant has been retrained to ensure something like this doesn’t happen again.”

the ‘customer’ has a proven history of ‘dining and dashing’.

Following the termination, other Twitter users came to the defense of the manager, pointing out tweets posted to Ali’s Twitter account boasting about “dining and dashing” or ordering food at a restaurant and leaving before paying. 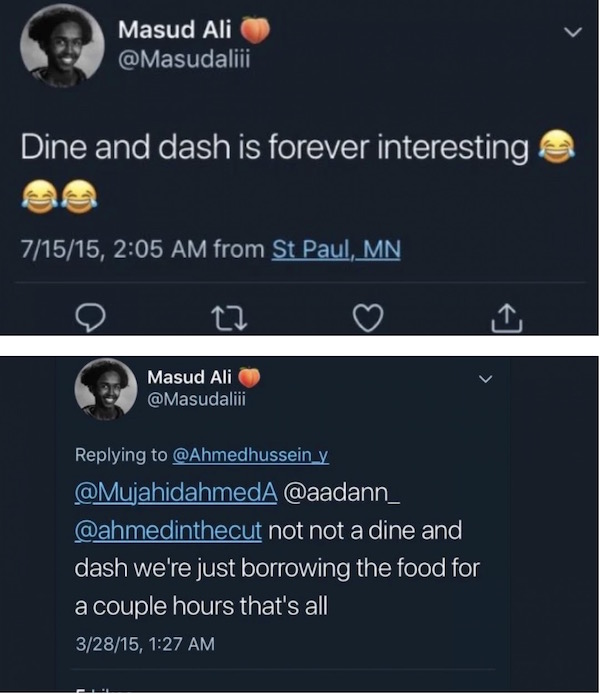 The revelation prompted Chipotle to reconsider its hasty firing of their manager.

The ‘customer’ retweeted such ‘helpful’ life hacks as showing how to use a condom to defeat a clothing security tag.

He’s a real credit to society, for sure.

Chipotle has some serious backpedaling to do, by making their snap decision to appease the Twitter Mob, they’ve put themselves in an impossible situation.

They will either piss off those who think everyone and everything is done for reasons of race… OR they will piss off everyone who doesn’t like to see the torches-and-pitchforks crowd short-circuit due process and basic decency.

There’s also the whole ‘wrongful termination’ aspect and Chipotle’s contribution to defaming the manager’s reputation by assuming she was a ‘bigot’ and firing her for it.

Will other corporations learn from this lesson?

Even worse than the reaction by management was how the Twitter mob piled on the employees for being so committed to their job that they didn’t just make the ‘free food’ anyway.

They’re not screwing over ‘the man’ or some corporation.

They’re screwing over some poor franchisee who took out a loan to try to make a business work. One that put each and every person behind that counter to work, and gave them an income.

Is the owner black? White? Asian? Latino? Should it even matter?

That should be reason enough not screw them over.

The mere fact that such thinking finds a receptive audience in American social media is a far bigger threat to our national unity than any ongoing war of words between the press, the President, and his political opponents.