Vote For Abrams, they’re saying. Is there an implied ‘or else’?

Talk about your mixed messages.

Stacey Abrams, the same woman who was co-sponsor of a gun-control bill that had some pretty hard-left goals. 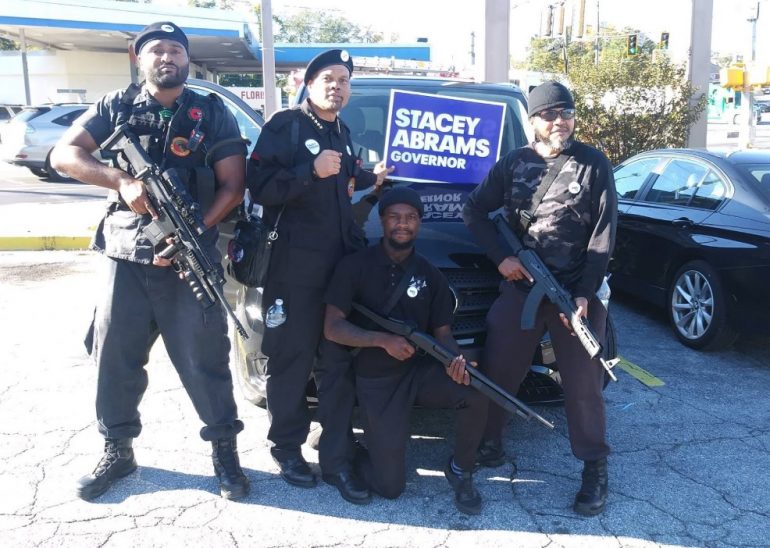 “Just to be clear, you were one of six co-sponsors of this bill,” Tapper said, which would have required owners of particular models of guns to “turn these guns in.”
Source: Real Clear Politcs

In 2016 @StaceyAbrams, Georgia’s democratic candidate for governor, sponsored a bill that would seize firearms.

And now, people belonging to a group with a past history of political violence are carrying just ‘those sorts’ of firearms while campaigning on behalf of Stacey Abrams.

She’s getting open support from a group that The Anti-Defamation League characterizes as a ‘Hate Group’.

It’s really not a good look, especially so soon after a Synagogue was just shot up by some garbage individual.

Members of the Black Panther Party marched through the city of Atlanta, strapped with assault rifles and brandishing Stacey Abrams campaign signs.

In a video posted on the group’s Facebook page on Saturday, members of the Black Panther Party are seen marching through the West End neighborhood of Atlanta in support of Stacey Abrams gubernatorial campaign. As they marched, the Black Panthers carried assault rifles and continually shouted slogans such as “black power” and “power to the people.”
Source: Real Clear Politcs

Here is their ironic statement when asked about their march:

“Brian Kemp is the only candidate in this race who has posed for pictures with supporters wearing racist, hate-filled t-shirts and refused to denounce them, while Abrams continues to condemn any racist, anti-Semitic, or otherwise discriminatory words and actions,” Collazo said.
Source: DailyCaller

‘Anti-Semitic’? Oh THAT’S rich. You DO know that the ADL itself calls you dopes a hate group, right? Here’s the quote:

The New Black Panther Party for Self Defense (NBPP) is the largest organized anti-Semitic and racist Black militant group in America. Since October 2013, Hashim Nzinga, who pre­vi­ously served as the group’s Chief of Staff, has led the group. — ADL

Maybe anyone who really cares about the issue of Anti-Semitism ought to be demanding Stacey Abrams to denounce you guys.

Would Abrams even DARE to denounce them? Or is she too desperate for their votes?

And for a party that keeps talking about election tampering, the fact that their group has been brought up on voter intimidation charges in previous elections doesn’t help their cause any.

That same DOJ leadership apparently doesn’t believe the NBPP was engaging in intimidation when it sent thugs uniformed like Mussolini’s blackshirts, one with a billy club, to stand in front of the entrance to a polling place. In fact, there is nothing the New Black Panthers have ever said or done to suggest that they don’t believe what they did was intimidating to people they hate. They preach intimidation and worse.
Source: Heratige

Will the media on the left call her on it? Or will they give her a pass?

You’re weren’t REALLY planning to stay home on Election Day, were you?