Questions arise with the election results in Florida. Again.

Two heavily Democrat counties have had some ‘issues’ with their ballot counting. Broward County and Palm Beach County are still counting ballots. Someone should tell them that the election was over days ago.

The sudden reporting of ‘issues’ has erased the narrow lead of Republican Rick Scott over Democrat Bill Nelson, and the same goes for the race for Governor between Ron DeSantis (R) and Andrew Gillum (D). Both Republican wins are now in question and it all comes down to these two counties. The Senate race is the most contentious. So much so that Rick Scott has launched a pair of lawsuits against the counties.

Both the senate seat Scott thought was his on Tuesday night, and the Governor’s spot that looked all but won by Republican Ron DeSantis are both now within the margin of error for a recount.

Scott believed he won over the Democratic incumbent Bill Nelson, however, during a press conference Thursday night, after his Senate campaign sued Broward County and Palm Beach County elections officials to turn over records regarding how ballots are being counted, Scott said: ‘The people of Florida deserve fairness and transparency, and the supervisors are failing to give it to us.’

The lawsuit was filed about the same time Scott ordered state law enforcement officials to investigate the Broward and Palm Beach voting operation.

The complaints say the counties handling of the ballots ‘raises substantial concerns about the validity of the election process’.

‘Late Tuesday night, our win was projected to be around 57,000 votes,’ Scott told reporters during his press conference Thursday.

Yeah, that’s not fishy at all. 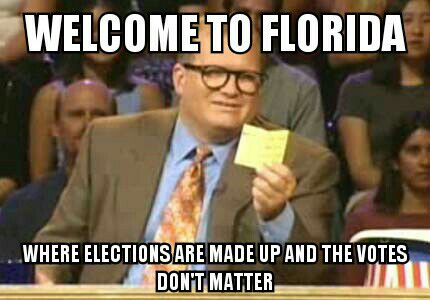 Florida — what the heck is wrong with your elections oversight?!?!

The Broward County Supervisor of Elections has been found guilty of illegally destroying ballots in 2017, and her office has faced multiple lawsuits.

The election supervisor in Florida’s second-most populous county broke the law by destroying ballots cast in last year’s congressional primary involving Rep. Debbie Wasserman Schultz, according to election-law experts across the political spectrum. The congresswoman’s opponent has sued to get access to the ballots…

…Snipes’ office, meanwhile, is involved in two other lawsuits and has been plagued by errors and controversies over public records and paperwork…

…Meanwhile, Snipes is defending herself in another lawsuit over the way the office removes ineligible voters from the rolls…

…Problems in Broward’s elections office preceded Snipes, who was appointed to the post in 2003 by then-Gov. Jeb Bush after her predecessor, Miriam Oliphant, was removed from office after she botched an election in 2002…

Law Enforcement is looking into another big corruption scandal having to do with Election Fraud in #Broward and Palm Beach. Florida voted for Rick Scott!

And he’s not the only one. Senator Marco Rubio (FL-R) has been tweeting tirelessly.

Not very comforting to #Florida voters that #BrowardCounty supervisor,in whose hands may rest outcome of Senate & cabinet race has in the past:
1. Illegally destroyed ballots
2. Secretly opened mail ballots
3. Sent voters too many ballot pages
4. Left const question off ballot

How can anyone have confidence that the #BrowardCounty election supervisor will be fair when last night she made clear her personal animus toward Gov. Scott & towards the states top law enforcement agency when she claimed he “owns” the #Florida Department of Law Enforcement? https://t.co/K1lrwzRcnE

Early Voting in #BrowardCounty ended 108 hours ago. Every other county,including neighboring Miami-Dade (which had 100k more votes cast) was able to canvass,tabulate & report to state by deadline. But #Broward still hasn’t finished & won’t disclose how many ballots are left.

Under #Florida law county must upload by 7 p.m. day BEFORE election ALL early votes canvassed & tabulated by end of early voting & report results within 30 minutes of polls close

60 hours after that deadline only 1 of 67 counties is still counting early votes, #BrowardCounty pic.twitter.com/oP7HdpZcTk

This is getting ridiculous.

If we start talking about ‘hanging chads‘ again — I don’t know if I can handle it.

Maybe it’s just time to simplify the ballots in Florida. There is obviously a problem there. It’s either the ballots or the people, and I’m hopeful that Floridians are smart enough to cast a ballot properly despite all the ridiculous ‘Florida Man…’ headlines. 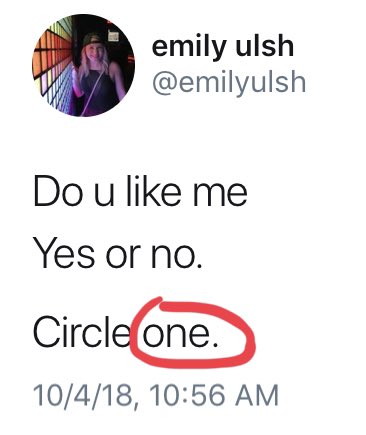 We get it — Florida is a divided state.

Sometimes the right choice is clear, but apparently not in Florida.

I swear Florida could be voting between ice cream and a kick to the head and the results would be 50.5%-49.5%.

Provisional ballots, which are given if someone doesn’t provide the correct identification, or their eligibility to vote is in question, will be counted if there is a hand recount in Florida.

A reporter from the Miami-Herald tweeted out that over 100 provisional ballots were tossed out in Miami-Dade County because people tried to vote twice in the same election.

Stream of aggressive red stamping at Miami-Dade canvassing board as panel rejects provisional ballots from 108 people who showed up to vote a second time in the same election. pic.twitter.com/gr4bNU3Lk0

Trump’s 2016 and 2020 campaign manager, Brad Parscale, weighed in on the shenanigans in Florida and Arizona.

These democrat counties in Florida and Arizona are playing tricks because they just can’t accept the fact they lost. I will not be shocked if investigations lead to rampant fraud. Republicans need to send every lawyer we have to protect the legitimacy of these elections.

According to the South Florida Sun-Sentinel, these two blue bins,circled in the attached picture,hold the ballots that remain to be counted in #BrowardCounty as of 4:20pm this afternoon. Almost 48 hours after the polls closed. pic.twitter.com/EJxJYxq9XG

Apparently #BrowardCounty elections left behind a box labeled “Provisional Ballots” at a local elementary school that served as a polling place.

Just let that sink in for a moment. https://t.co/o1Gn7mxOzG

This video,posted by an Independent Cong candidate in 18 (who was endorsed by Bernie Sanders in 16) purports to show BrowardCounty ballots being transported from polling places in private cars.

Has anyone in local media looked into this claim or asked elections dept about it? https://t.co/1JztfdRudn

Since 3am Wed slow drip from these 2 Dem controlled counties cut Scott lead from 54 to 17K. And they refuse to disclose # of ballots they have left pic.twitter.com/2K8hR4D2P2

Senator Rubio has this pegged correctly.

Recounts in close races are automatic under #Florida law & I support a #FloridaRecount2018 100%.

What is happening in #BrowardCounty isn’t about a recount. As Dem lawyer said "We're doing this not just because it's automatic,but we're doing it to win," https://t.co/w2y03m9Ay6

They just can’t handle it when Democrats lose.

Get your sh!t together, Florida. Fix your elections.

It’s for your own good. You’re undermining the integrity of elections, and it won’t be long before we’ve all had it with you.