Well, that would explain a lot, wouldn’t it?

If there’s something you can say about Vegans… they’re not shy about what they believe.

Quite the opposite. It’s usually quite a lot harder getting them to shut up about it.

Some even shame those of us who love animals… on our plate next to the mashed potatoes.

… I was surprised to learn from a new review article in the journal Appetite by Daniel Rosenfeld of Cornell University that reported vegetarians are more likely to be depressed than meat-eaters. Intrigued, I took a deeper look into this body of research. I located 11 peer-reviewed papers on the topic published between 2007 and 2018. Rosenfeld was right. Here’s what I found in each of them.
Source: Psychology Today

There was a consensus among unrelated studies. Again and again, the mental-health of meat-eaters came out on top. 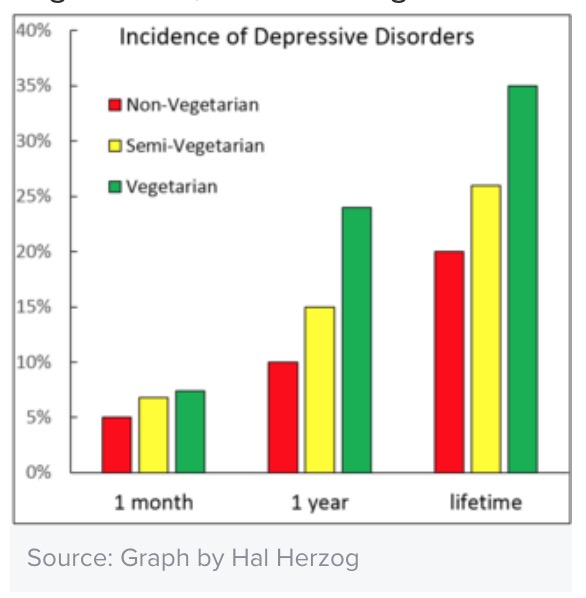 In 2014, Austrian researchers published an elegant study of individuals who varied in their diets: 330 vegetarians, 330 people who consumed a lot of meat, 330 omnivores who ate less meat, and 330 people who consumed a little meat but ate mostly fruits and veggies. The subjects were carefully matched for sex, age, and socio-economic status. The vegetarians were about twice as likely as the other groups to suffer from a mental illness such as anxiety and depression.

Suprised by the results, the author ventured into speculation:

What is going on? I can think of a couple of possibilities. First, it could be the case that vegetarian diets actually produce biological changes in brain chemistry or even the microbiome that causes some people to be depressed. I am a bit skeptical of this explanation, but the German study mentioned above found that 34 percent of people with depression started on a vegetarian diet before the onset of their mental disorders compared to 9 percent of people with anxiety disorders.

I think it is more likely that some traits may predispose some people to both depression and to vegetarianism. Women, for example, are twice as likely as men to suffer from depression, and they are also more female vegetarians than male vegetarians. And, while the evidence is mixed, some personality types may also be particularly drawn to vegetarianism. In addition, vegetarian diets can be isolating. A woman who recently became a vegan told me that she suddenly gets fewer dinner invitations from old friends – they don’t know how to cook for her. And one young woman told me, “I won’t go out with anyone who is not a vegetarian. It limits my pool of possible men.” Further, social reasons rank high when former vegetarians and vegans are asked why they returned to meat.
Source: Psychology Today

Could be all kinds of reasons? Sure.

Then again, there are other possible reasons. After all, those on meat-rich limited carb diets that stimulate ketosis have reported improved mental function. So her reasons to explain it away for purely social reasons may be premature.

If you didn’t already have enough reasons to keep eating meat, now we’ve got one more … our mental health is precious. If there’s any correlation at all… why would we risk it by eating fake meat?