For anyone who still believed there are supposedly benevolent reasons behind calling certain speech ‘hate’ — this will rock your Pollyanna world.

Social media (and yes, including user data) was a big part of Obama’s success in getting elected and reelected. But seeing how Conservatives took the lead in social media 2016 was a rude wake-up call for the activists in Silicon Valley.

They were embarrassed, angry, and looking to settle some scores.

And now there are leaked emails that prove it:

The group sought to strike at Breitbart News’ revenue by kicking the site off Google’s market-dominating ad services. Although their efforts ultimately failed, the discussion featured senior Google employees speaking frankly about their reasons for targeting the site. These included unfounded allegations of “hate speech” and “fake news.”

In the leaked emails, Google employee Richard Zippel advised a fellow employee that Google would act against Breitbart News “at the site level” if sufficient examples of “hate” were found. This kicked off a concerted effort to find evidence of “hate speech” on Breitbart.

They were looking for reasons to punish a political rival.

But of course, there ‘Only a platform’ and should enjoy the same protections that a phone company or internet provider enjoys.

Does THIS look non-partisan to you?

David Richter, just days after Trump’s Inauguration specifically targeted Breitbart for special scrutiny. Note the ‘hold their nose’ reference that gives their political biases away. (But they’re ‘not’ motivated by politics, their official statement says.)

Next up is Jim Grey. His job is “Director of Monetization” at Google. His team had been targeting Breitbart every week, under the guise of looking at ‘fake news’. The Director explicitly thanked employees for taking this action.

He’s been busy. He’s still grateful for the ‘volunteerism’ (which in any other context would be better described as ‘political activism’.)

The discussion was then joined by Jeff Lakusta, head of technical support for Google’s ad-buying software. Inviting colleagues to join a collaborative project, Lakusta said it would be “tough” to prove Breitbart is hate speech only a “thorough” approach would result in Google demonetizing the website.

As Breitbart News previously reported, Lakusta would later follow up his efforts by co-authoring an open letter to Google’s management, demanding that Breitbart News be demonetized.

The legal team for Adsense weighed in on the morality of targeting companies for their politics: 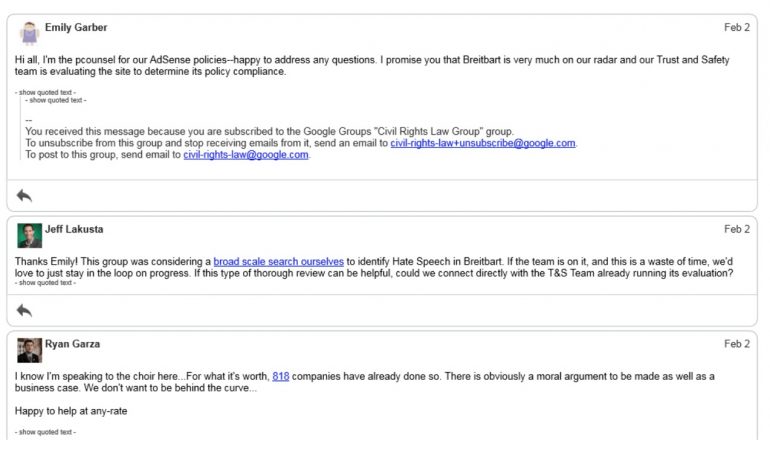 Naturally, they’re justifying such targeting by claiming to do so for the greater good.

Nobody’s EVER used a ‘greater good’ argument to excuse legitimately evil actions before… have they?

Why does any of this matter? Because Silicon Valley has spoken openly about remaking America in their own image whether We The People want them to or not. They have been using terms like Civil War to describe how they would use their Tech Influence to force a cultural transformation down our throats.

These are the very same men and women ‘of principle’ who are willing to compromise with censorious thugs like China to gain access to their markets… meaning the become enablers helping Xi Jinping choke information flow, and downplay his human rights abuses.

But our ‘betters’ in Silicon Valley would have us believe that Breitbart and new sites like ours are the REA threat to a free and fair society.