Melania and Michelle both stepped out in yellow gowns, but which one wore it better?

Fashion magazines have kept Melania conspicuously off of their covers since she became First Lady. This is a huge departure from the last First Lady, Michelle, who was featured 12 times on the cover of publications including the high-fashion magazine, Vogue.

Here are just a few samples of the headlines from major magazines:

At ClashDaily we’ve noted that Melania didn’t make it onto Vanity Fair’s Best Dressed List, noted that Michelle has been viewed as a ‘fashion icon‘ despite her questionable style. We’ve even asked who is more winsome.

It’s rather strange that fashion magazines would ignore a former model who has been wowing the world with her style, which can be seen as a return to elegance. Her clothes are not ostentatious, but simply flattering. Classy, you might say. Of course, the Media(D) looks for opportunities to criticize her like when she wore high heels on a plane to visit Houston after Hurricane Harvey, and her $39 Zara jacket.

Michelle is out and about promoting her new book and she wore a yellow gown with $4000 Balenciaga thigh-high gold boots. It was… an interesting choice.

Melania wore a yellow gown earlier this year during her visit to the United Kingdom. That dress was in line with her signature style of simplicity and elegance. 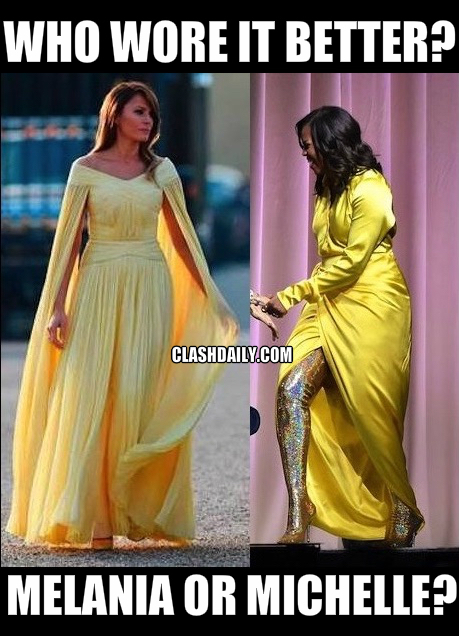 Harper’s Bazaar likened Melania’s dress to Belle’s famous yellow gown in Beauty and the Beast. Of course, this allowed the anti-Trump crowd to compliment Melania while taking a jab at the President.

I’m waiting for Macron to turn up dressed as a candlestick. pic.twitter.com/LifBGZ72Te

As a refresher, here’s what Melania’s dress has been compared to:

Well, you don’t get much better than being compared to one of the most-loved Disney Princesses of all time.

Jafar when he turned into a snake!

See the golden-hued underbelly? Tell me I’m wrong — go ahead.

Those boots make her legs look like she is impersonating a lizard.

Don’t get me wrong, I think they’re gorgeous — in theory. Let’s face it, most high-fashion isn’t really wearable. The real problem here is that these look like boots a 20-something party girl would wear to a club, or that Beyoncé would wear on stage, not what the former First Lady would wear on a book tour. It’s also what the boots are paired with that is the problem. (I mean the yellow dress, you guys, don’t be too mean.) It’s just too… shiny.

The Washington Post’s Fashion Critic, Robin Givhan, praised Michelle’s ‘Faaaashion!‘ in a piece titled, ‘Michelle Obama can wear whatever she wants now. What she wants is sparkly thigh-high boots.‘

Cosmopolitan declared that ‘all other boots are cancelled’ in the piece titled, ‘Michelle Obama Just Stepped Out in $4,000 Gold Thigh-High Boots and I’ve Never Loved Her More‘

So, as you can see, Michelle is still being praised for her fashion sense while the current First Lady is ignored.

Here’s the other thing, when many people of my particular vintage think thigh-high boots we  think: 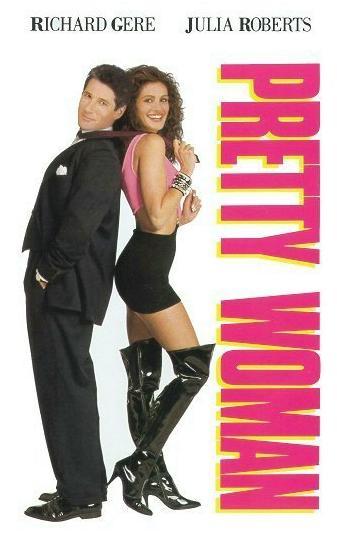 And that is clearly something that I don’t want to associate with Michelle Obama.

I personally love that the new First Lady has brought back that simple elegance that used to be praised by fashion magazines when it was worn by anyone but her.

In my own humble opinion, wearable fashion with clean, classic lines is much more beautiful than the avant-garde fashion of stage performers.

But hey, that’s just my opinion. However, I don’t think I’m alone in my thoughts on that. Europe’s royals are taking their fashion cues from Melania, too.

The fact is, people love our classy First Lady, Melania Trump and the Media(D) doesn’t.