Conformity to Facebook’s fascist rules strikes again. This time in the hunting world.

Many of you probably know the name Jeanette L Hall already. She’s an avid hunter and a ‘Pro Staffer’ at Cabellas. Scratch that… she WAS a Pro staffer, until they changed their rules.

Jeanette was informed in an email that she was no longer allowed to post pictures of her hunts from Africa. Since Cabela’s merged with Bass Pro Shops they have become the largest hunting retailer by an extremely large margin. It seems they are caving to political correctness pressure.

First big change of 2019. I have declined Cabela’s offer to be a Pro Staff this year. While it has been fun teaching the…

Here’s the text she included in her FB message:

First big change of 2019. I have declined Cabela’s offer to be a Pro Staff this year. While it has been fun teaching the past 3 years, which is one of my passions, some of the changes since the merger between Bass Pro Shop and Cabela’s has troubled me. The biggest being that I received an email from corporate stating that I could no longer post photos of my African hunts or exotic hunts. This goes against everything I stand for. As you all know, I’m a HUGE advocate for hunting my beloved Africa. I will not be ashamed nor hide the fact that I proudly hunt internationally. I emailed corporate back about this questioning why I was banned from posting my photos but they refused to give me any reason. I didn’t like this secrecy and lack of transparency. Dick Cabela was a big advocate for hunting Africa and I know if he were alive he would be furious with this decision. Just as I am. It makes me wonder if Cabela’s will become a camping store only in the near future as politically correct idiots continue to chip away at hunting from all angles.

Many people assumed I got gear for free from Cabela’s. FALSE. I was never even given so much as a hat. I had to pay for everything. While I got a small discount on branded items only, everything else was full price.

There was much more involved in my decision as well. One of the managers had shunned me from the south store because I had voiced my opinion. Thus I had to travel to the north store, which is even further of a commute for me (fuel was not compensated as per my contract). This childishness was yet another factor prompting my decision.

So there you have it. I will no longer be active on the Cabela’s Pro Staff page. It was a fun ride but I will not be gagged and told I cannot post my photos of hunts I’m extremely proud of.

Here’s a much better article that came out today. So far it has been pinpointed that Cabela’s Canada is the one who sent the email to all pro staffers in Canada instructing us not to post photos of African/ Exotic animals (not once but twice in the contract). Cabela’s/ BPS USA has released a statement they did not do such a thing. Wether this is a cover up or not we will never know. But someone was behind penning that contract. I would like to know who and why.

Now, what has any of that got to do with the digital fascists at Facebook? Here’s a quote from Cabellas own literature. 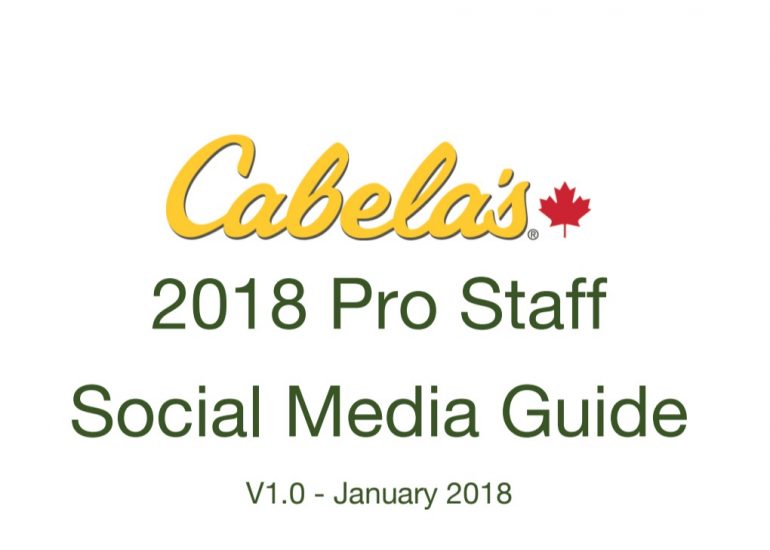 One of the sections in this piece reads as follows:

• Do not post animals’ shots that are excessively bloody/inappropriate and/or are exotic
animals (safari animals, etc.)
• Do not share sensitive information on social – sales, non-public, financial information, merger
details, etc.
• Do not post about competitors’ brand/prices/etc.
• Do not post photos of customers/employees in the stores without their approval
• Do not create Facebook contests/sweepstakes without our support (contest waiver/rules/liability concerns)

So, some shmuck in FascistBook gets to decide that safari hunts are ‘unethical’ but less ‘exotic’ hunts in North America are just fine.

Then those rules set the limits on what is deemed ‘acceptable’ in social media.

And then Corporations play by the rules some goober in a cubicle, who’s probably never held a gun in his life have set for the rest of us to abide by?

Does that seem a little screwy to you?

Good for Jeanette for taking a stand like that. You don’t need to genuflect and kiss the ring.

Facebook is in the process cratering. Instead of bending over and accepting whatever bullsh-t rules Silicon Valley wants to set for the broader public, how about we all start to push back and tell them ‘no’.

Dick’s just learned the hard way that proving to the Left how ‘woke’ you are doesn’t pay the bills:
Dick’s Embracing Of The Left’s Gun Control Blather Was A BAD Move – Massive Shutdowns Coming

Maybe it’s time Sporting Goods stores went the other direction — and show that they support their customers and ethical hunting on EVERY continent.

Not just the ‘safe’ examples. Because just like they’re doing with comedy shows. The Left is all about controlling anything it doesn’t like. If you think it truly likes ANY kind of hunting or outdoorsmanship, you’ve not been paying attention.