An Ivy League professor has shared her opinion on the Covington Catholic school students in the wake of the controversy surrounding a clip of a video that went viral on Social Media(D).

ClashDaily has thoroughly covered the controversy surrounding MAGA hat wearing Catholic students in Washington attending the March For Life, a Native American veteran in Washington for the Indigenous Peoples Rally, and a small group of Black Hebrews hurling racist and homophobic insults at the teens.

You can get caught up on all the related ClashDaily articles here:

Dear ‘Media’: Why No Interest In The VILE Black Hebrews And Their Racism & Homophobia?

This incident has been revealing.
The Media(D) jumped at the chance to denounce a group of (mostly) white, Catholic boys wearing MAGA hats, and gave the other two groups a free pass from any public scrutiny. Hollywood elites and D-listers alike came out and called for violence against them, with no repercussions from Social Media(D). But when it became clear that there was much more to the story, some have backed down. Despite that, Covington High School in Kentucky has been closed due to safety concerns as the boys and their families have received threats of violence and even death threats.

An Ivy League professor, Dr. Ebony Elizabeth Thomas of the University of Pennsylvania’s Graduate School of Education also put her thoughts out on Twitter…briefly. After garnering some attention, (which was presumably the point of tweeting her musings,) she made her account private. 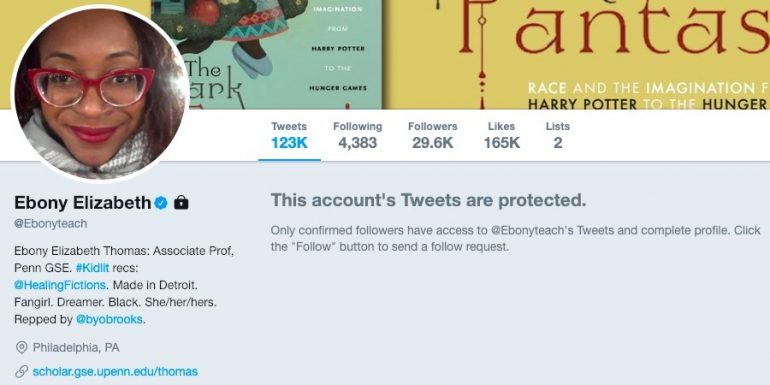 Dr. Thomas said that Nathan Sandmann, the Covington High School Junior was the ‘smiling face of whiteness‘ that ‘always hides a knife behind its back.‘

Now imagine if Dr. Thomas was a white professor saying this about a black high school student. That would be racism, right?

But that’s not all Dr. Thomas wrote on Sunday evening. In a series of now hidden tweets, she lambasted the teen and white people in general. 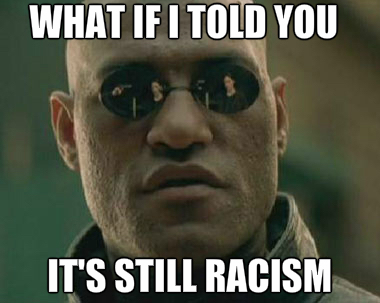 Dr. Thomas wrote, ‘Whiteness endlessly forgives its own transgressions. It rarely, if ever, gives those of us it harms and maims and kills time to process our motions. Time to heal. (Time to grieve.)’

She continued, ‘“You forgive us, right? You have to forgive us! understanding will make it better! Reconciliation! Diversity! Inclusion! That’s the smiling face of Whiteness. It always hides a knife behind its back. That knife says this: “You must forgive us. You must educate us. Or else.”‘

This chick is something else.

She went further, ‘Usually that “or else” happens anyway. But it will assuredly happen unless you kiss Whiteness’ ring. What choice do you have but to bind up your still-bleeding wounds, and say with your lips “I forgive you” even as you curse White supremacy in your heart and soul and mind?‘ 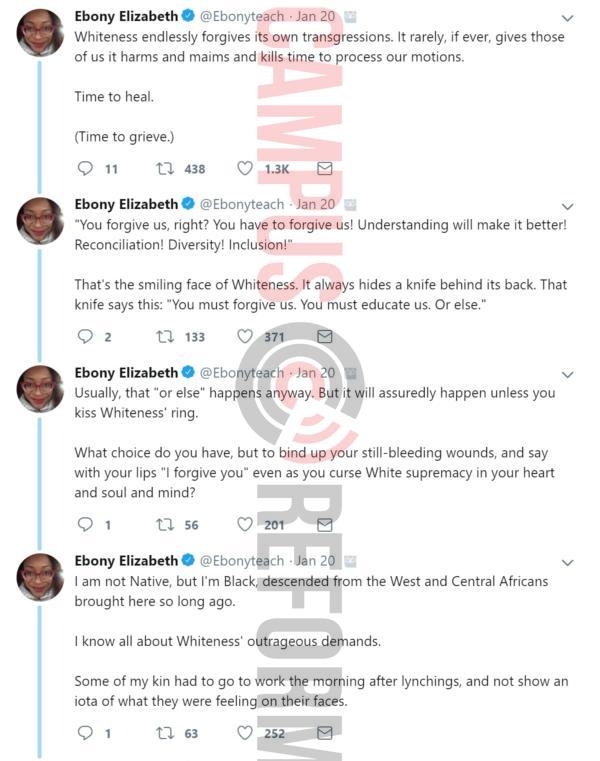 [EDITOR’S NOTE: I don’t mean to diminish slavery one iota. It was undeniably atrocious and left a deep wound in America that has not yet healed in almost 200 years. It would be nice, however, if we could ensure that discussions about slavery include the fact that slaves were around for thousands of years and the United States isn’t the only place in the world to allow slaveholding, nor was it only Africans that were slaves.]

Dr. Thomas continues, ‘I am not Native, but I’m Black, descended from the West and Central Africans brought here so long ago. I know all about Whiteness’ outrageous demands. Some of my kin had to go to work the morning after lynchings, and not show an iota of what they were feeling on their faces.‘

Then, Dr. Thomas says that she’s tired of the same old same old forgiveness, and has a suggestion on what should be done, ‘Whiteness endlessly forgives its own transgressions. Time’s up for instant forgiveness, for demanding free labor of the walking wounded, and for demanding that those you’ve offended “make it right” so you can feel better before they have time to mourn, grieve… and breathe.‘

She also says that she’s tired of the focus being on the soul-crushing white people and how they can be educated out of their obvious ignorance and bigotry, ‘The focus shouldn’t be on how these people can learn from BIPOC [Black and Indigenous People of Color]. This is not a Hollywood movie, and we’re flesh and blood, not magical creatures you get to use and abuse on your journey toward enlightenment. The focus should be on how White folks can do better “among yourselves.” Very tired of the interminable excuses. Weary of Whiteness endlessly forgiving its transgressions. I’m sick of constant demands that marginalized peoples sign off on the dotted line for this forgiveness when nothing changes…”I’m sorry! Educate me!” No, you’re not. And “no’. Whiteness endlessly forgives its own transgressions. That’s all I got. (Fix it.)’ 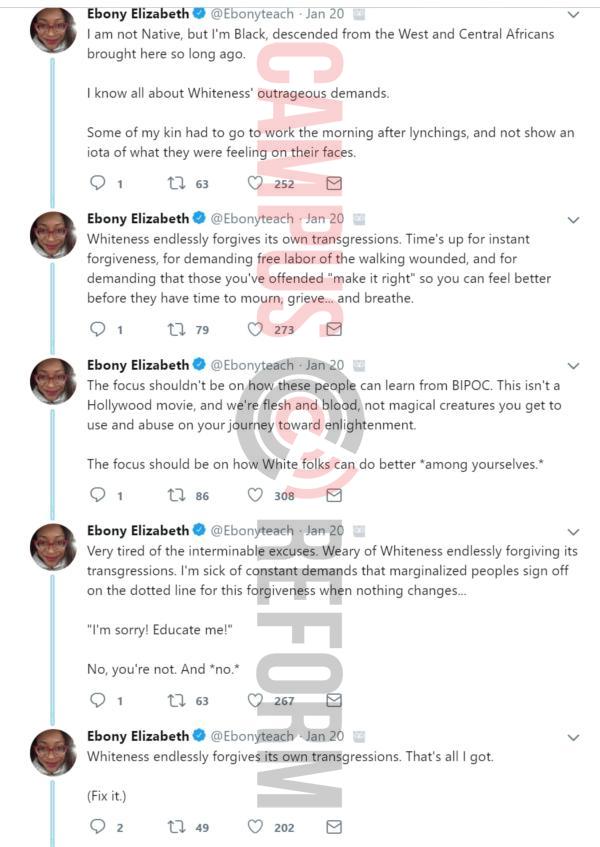 Now that the nearly two hours of video has been posted online, and it’s obvious that the Black Hebrews were harassing both the Indigenous people and the MAGA-hat Catholic teens, will Dr. Thomas walk back any of her statements? Unlikely.

She also said that she is not retweeting the video because it’s ‘visual trauma’. 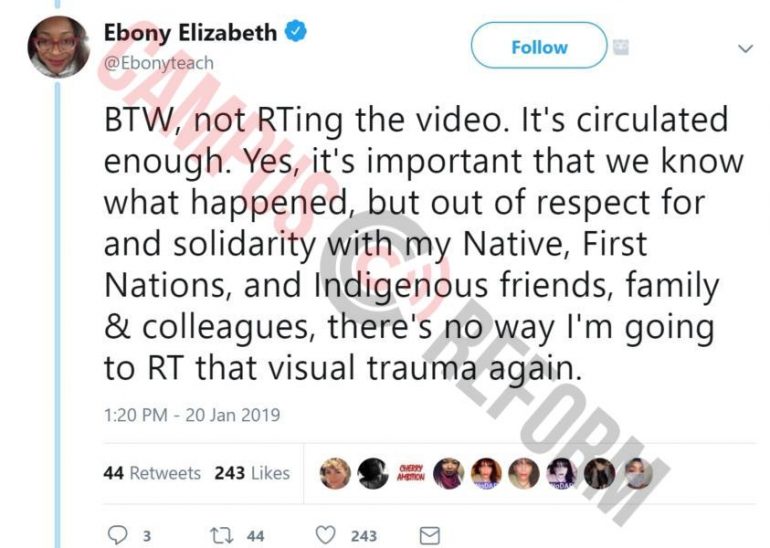 This woman has a doctorate degree.

If this numbskull can get a Ph.D. it makes me want to go back and get one myself. Of course, then I’d have to deal with the leftist know-it-all profs in academia…

Dr. Thomas is an English professor who says that literature must be reconsidered in our current age of ‘societal redefinition’ — her theories are based on critical race theory which is blatantly Marxist in origin. These are the pseudo-science disciplines that Dr. Jordan B. Peterson rails against. I don’t have time to go into it now, but here’s a great article on critical theory in academia and the backlash against it signaled by the rise in prominence of Dr. Jordan Peterson.

From her experiences in the classroom, teacher research, and dissertation study, Dr. Thomas came to believe that the language students and teachers use, the literacies that they engage in both inside and outside of school settings, and the literature and other texts they read and interact with must be reconsidered during this early 21st century era of social change and societal redefinition. In her work, Dr. Thomas synthesizes postcolonial, critical, and critical race theory with data from her empirical research in classrooms to examine the ways that literature is positioned in schooling and society today. As children’s and young adult literary empires continue to dominate publishing and Hollywood, she strongly believes that the field has the potential to become one of the most effective postcolonial, critical, and activist projects of all.

We need to fight this ideology. Here’s one fantastic guide on how to fight back.