Who knew? There really was a lot of truth in the derisive nickname ‘FakeBook’.

What better symbol could you think of to represent the true nature of the Social Media company than that army of cardboard Zuckerberg cutouts?

Maybe you saw it last year during the hearings… 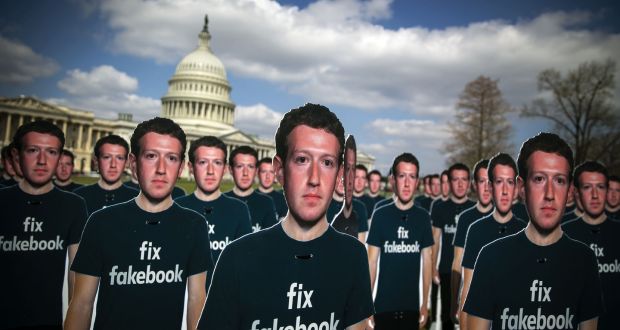 Investors are beginning to agree with that assessment…

…as bad as things have been of late for Facebook, with endless privacy breaches and Russian interference in the 2016 presidential election hanging over Menlo Park like a spectre, we believe that the situation is far worse than investors realize. Facebook has been lying to the public about the scale of its problem with fake accounts, which likely exceed 50% of its network. Its official metrics—many of which it has stopped reporting quarterly—are self-contradictory and even farcical. The company has lost control of its own product.

Fake accounts affect Facebook at its core in numerous ways:

Its customers purchase advertising on Facebook based on the fact that it can supposedly target advertisements at more than 2 billion real human beings. To the extent that users aren’t real, companies are throwing their money down the drain.
Fake accounts click on advertising at random, or “like” pages, to throw off anti-fraud algorithms. Fake accounts look real if they do not follow a clear pattern. This kind of activity defrauds advertisers, but rewards Facebook with revenue.
Fake accounts often defraud other users on Facebook, through scams, fake news, extortion, and other forms of deception. Often, they can involve governments.
Source: Plainsite

How do you think news like this will be for Fakebook’s bottom line, especially since they can no longer get away with exploiting the naievity of children for profit.

Facebook deliberately allowed children to spend money on its platform without their parents knowledge, according to newly unsealed court documents.

The multi-year effort was detailed in a class action lawsuit revealing Facebook’s alleged attempts to increase revenue for games like Angry Birds and PetVille.

In one instance, a 15-year-old child racked up $6,545 in charges after playing a game for two weeks but no refund was awarded. In other instances, Facebook employees appeared to be aware that children were spending money without even realising it.

…Facebook’s policy was apparently to encourage game developers to allow such spending in order to increase revenues – a practice referred to internally as “friendly fraud.”

An internal memo circulated in 2011 stated: “Friendly Fraud – what is is, why it’s challenging, and why you shouldn’t try to block it.”

These are the people who think they know better than we do how the country should be run.

No WONDER Facebook had lobbyists palling around with the Democrats over in Puerto Rico. They don’t want Maxine Waters turning her guns on THIER sketchy business practices.