The Media(D) crapped all over President Trump for giving fast food to college kids — but they forgot to ask the Clemson Tigers what they thought of the gesture.

The scandal that occurred at the White House on Monday night was one for the history books. Never has there been a time in our democracy that the President of the United States of America hosted a college championship football team and deigned to feed them fast food. According to the Media(D) this might actually be worse than the non-crime of ‘Russian collusion’ of which there is no evidence at present.

When I reported on this story yesterday,’Trump Serves Fast-Food To Clemson Champs – Liberals Lose Their D@mn Minds’ I had no idea how true that headline was. Aside from the expected jabs from the Late Night Democrat Pravda, the Media(D) was the worst.

The Washington Post published a 1200-word report ‘fact-checking’ the President’s claims about the hamburgers and pizza in their Political Analysis section. The author, Phillip Bump, ran into complications, though. Apparently, besides the spread on the table captured in photos, (which they mapped out with some detail,) some food may have been held in reserve and served on trays by wait staff. Can’t you just imagine it?  ‘Another BigMac, sir?‘ and the thing that a server in the White House would never imagine ever saying, ‘Would you like fries with that?‘

But, being the place where Journalism Plummets Into A Deep Abyss Where There Is Pitiful Wailing And Gnashing Of Teeth, Bump managed to hazard an estimate.

This total includes 319 sandwiches, 177 of which were hamburgers. Perhaps Trump’s “300” hamburgers figure referred to all of the sandwiches — or perhaps they weren’t all put out at the outset. (The low number of Whoppers and pizzas certainly does suggest that some food may have been held in reserve.) That the staff who were passing around Wendy’s on serving trays took those sandwiches directly from the table, however, seems to suggest that what you see in the photos was what was purchased.

Bump decided to further fact-check one more claim made by the President because, WaPo Genius Reporter™ that he is, he is apparently clueless as to what ‘figurative language’ is and how people use idioms and exaggeration quite often in normal, human speech patterns.

Trump says they bought "1,000 burgers" for Clemson. "It was piled up a mile high," he said pic.twitter.com/Nu8EfToB6R

FACT CHECK: At two inches each, a thousand burgers would not reach one mile high.

Had Trump instead invested his entire net worth — $3.1 billion per Forbes last year — on $5 sandwiches, each two inches high? A stack of hamburgers nearly 20,000 miles high.

It would require quite a large silver serving platter.

Let me offer a little fact checking in the style of Phillip Bump of the (formerly) esteemed Washington Post.

FACT CHECK: No one has ever been hungry enough to eat an entire horse.

FACT CHECK: The Washington Post’s reporting, while not a mile wide, is merely an inch deep.

Phillip Bump just can’t seem to wrap his head around an idiom. I should clarify that that is also a thing called figurative language. As malleable (and empty) as his noggin may be, I don’t suggest he try to literally wrap it around anything, let alone an idiom. He might hurt himself or others.

CNN’s hard-nosed crack reporter, Jeanne Moos, who reported with outrage that the President gets two scoops of ice cream to everyone else’s single scoop, offered her assessment on the fast food:

When President Trump hosted a fast-food feast for the Clemson Tigers at the White House, his spelling of a particular menu item drew attention. ? CNN's Jeanne Moos reports. https://t.co/wiZLkH3yaw pic.twitter.com/SDzYEZEGp6

But, Clemson players loved it. 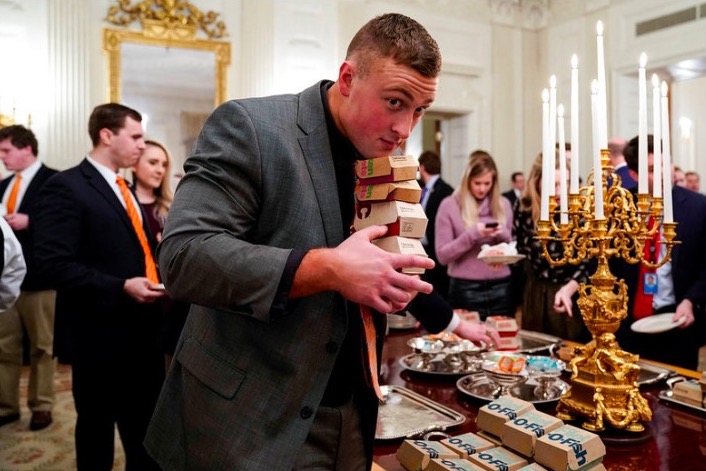 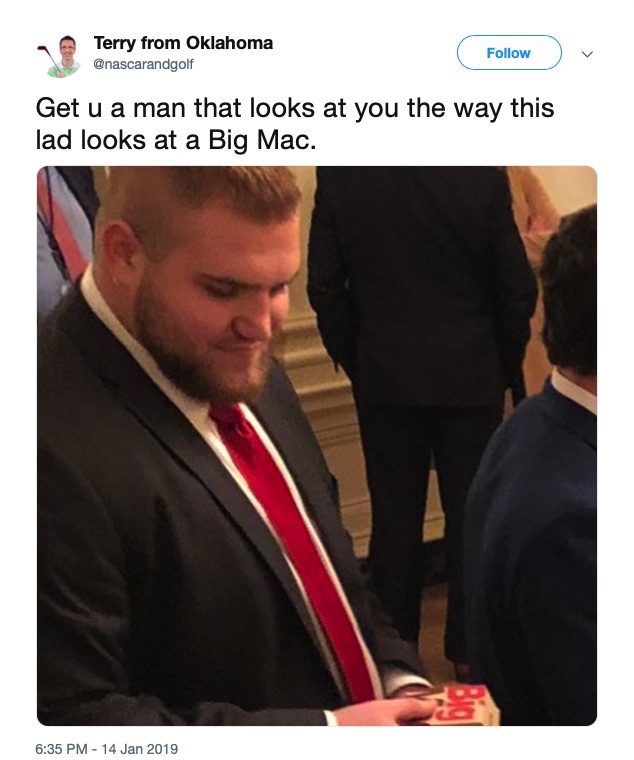 Clemson’s coach, Miguel Chavis, then spoke out on social media about the White House event: 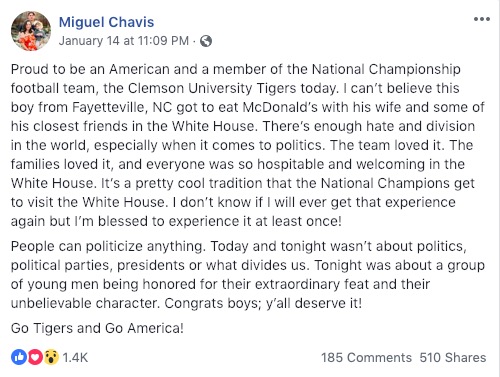 Proud to be an American and a member of the National Championship football team, the Clemson University Tigers today. I can’t believe this boy from Fayetteville, NC got to eat McDonald’s with his wife and some of his closest friends in the White House. There’s enough hate and division in the world, especially when it comes to politics. The team loved it. The families loved it, and everyone was so hospitable and welcoming in the White House. It’s a pretty cool tradition that the National Champions get to visit the White House. I don’t know if I will ever get that experience again but I’m blessed to experience it at least once!

People can politicize anything. Today and tonight wasn’t about politics, political parties, presidents or what divides us. Tonight was about a group of young men being honored for their extraordinary feat and their unbelievable character. Congrats boys; y’all deserve it!

Here’s the thing — this Clemson Tigers Championship team will be immortalized because the anti-Trump leftists will insist that this moment is included in history books just to mock the President.

They have had a unique White House visit, one that won’t likely be replicated. That’s a story that each of them will have for the rest of their lives.

The softboiled eggheads in the Media(D) can never take that from them.