These girls figured that they could do whatever they wanted to. Here’s what happened when someone dared to tell them ‘No’.

An employee of the fast food restaurant posted a video of a bunch of teen girls throwing objects at customers and staff at a McDonald’s in Moreno Valley, Los Angeles.

Why are these incidents always happening in a McDonald’s or a Walmart?

Pro-Tip: Avoid the McDonald’s in the Walmart at all costs.

It all began when a mother asked two teen girls to leave the children’s play area where her daughters, aged 2 and 5, were playing. The teens didn’t like that, so they challenged the mother to a fight.

When the mother refused to fight them, they threw cups water and ice at her. This escalated to throwing drinks at random objects at the staff and other customers in the main area of the restaurant when the mother and her family complained to the manager on duty.

However they subsequently began throwing drinks, shoving items off the counter and throwing cups at people at the service counter.

Her father then chased the group outside and held onto one of the girls while he called the police. At that point, the victim said she ran out and told him to let the girl go.

The mother, who did not wish to be named, told CBS News: ‘They were punching me the whole time.

‘They kept wanting to fight me, they all started hitting me and my two little girls were crying. My dad realized that they were on me and he pulled me away’.

Police said the teens caused about $1,000 in damage before they took off and they have yet to be found.

The Daily Mail reports that a monitor which processes orders was damaged. In the video, it appears that the large monitor that displays the menu was malfunctioning. 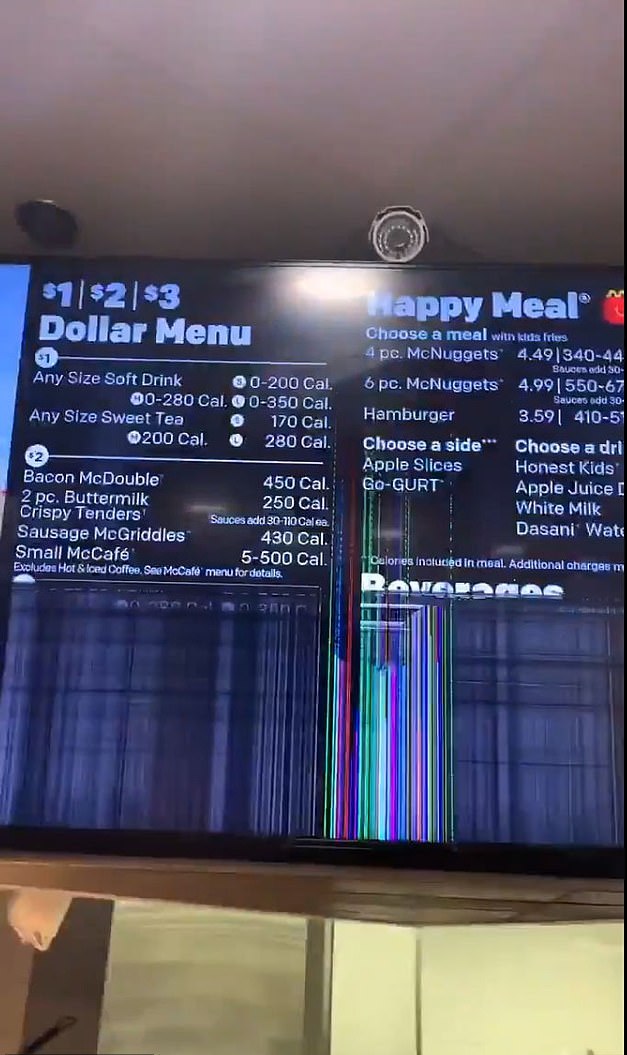 Dexter Forbes Jr, the McDonald’s employee, who posted the videos on social media, said that a customer in a black sweater stepped in and did more than his manager was able to do. ‘He was doing way more work than my manager was. He was making sure they were okay, he walked to the back with them,’ said Forbes. He does concede that his manager was on hold with the police for an extended period of time. Forbes said that he was allegedly suspended then subsequently fired, presumably for posting the videos and drawing attention to the incident.

In a statement to CBSLA, McDonald’s said on Tuesday night: ‘The safety and security of our guests and their families are a top priority.

‘We have been in contact with the local law enforcement and are fully cooperating with their investigation’.

The unidentified mother is hoping someone will recognize the girls in the video, which was viewed on Facebook over 56,000 times.

Here is the CBS report that includes an interview of the mother as well as the former McDonald’s employee:

These girls got to have their tantrum, harass people, cause damage, and then just walk away.

Why did this happen? Because they wanted to play in a children’s play area which has age restrictions clearly posted. Then, when a mother with small children said that the area is for, you know, small children, they want to fight her.

These nasty teens should have to apologize to that family, the staff, and pay for the damage that they caused. Maybe have them clean out the bathrooms and the play area as a form of service to the McDonald’s.

What do you think should happen to these girls when they’re found? Let us know what you think in the comments.