AOC seems to be adapting to the Swamp nicely.

The 29-year old bartender turned Congresswoman has nailed the ‘It’s Good For Me, But Not For Thee’ hypocrisy favored by socialists — ‘democratic’ or otherwise.

Freshman Rep. Alexandria Ocasio-Cortez(D-NY) wants Americans to change their eating habits but was recently spotted at a swanky eatery in her posh Navy Yards neighborhood grabbing a bite with her Chief of Staff, Saikat Chakrabarti. Ms. ‘Green New Deal’ says that Americans shouldn’t be eating burgers for breakfast, lunch, and dinner — but there’s Chakrabarti mowing down on a big ol’ juicy burger. I guess she didn’t want to lecture the rich benefactor that helped her get elected by funneling money through his PAC back to her via her boyfriend.

Here are some closeup photos: 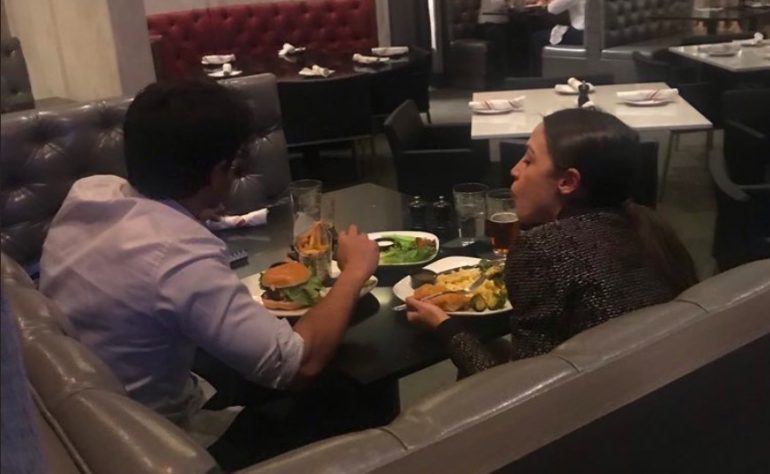 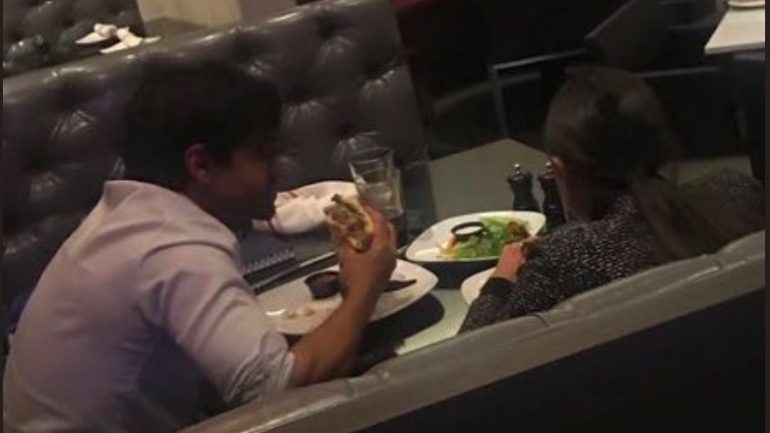 Both the left and the right criticized Caleb Hull, a conservative content creator, for the ‘creepy’ stalkerish photo. I mean, in the real world it really is pretty weird and creepy to take photos of random people eating like that. But, AOC has embraced her celebrity status and this is the price of fame. Especially when just days ago she lectured Americans about burgers and her dining partner is mowing down on one.

People are Very Mad Online in this thread. I didn’t take the pic but I guess the only thing that would have been acceptable for the person who did is if they confronted AOC and screamed in her face until she left the restaurant like the libs do ??‍♂️

As Hull pointed out, taking a photo of someone at a restaurant is hardly the same thing as the confrontations that Sen. Ted Cruz(R-TX), Sarah Sanders, Kellyanne Conway, or even Fox News host, Tucker Carlson faced. The very same kinds of in-your-face confrontations that were encouraged by Rep. Maxine Waters(D-CA).

hArAsSiNg pEoPlE iN rEsTaUrAnTs iS sO rUdE aNd cReEpY dUdE pic.twitter.com/IU6p5vswdw

Perhaps the covert photographer should have yelled at Chakrabarti and confronted him on how his burger consumption is destroying the planet and killing all the children.

Assuming that you have children before the world ends in 12 years — in part because of massive burger consumption.

AOC herself commented on the photo as it spread on conservative Twitter.

Tonight a dude was creepily (and obviously) taking a picture of me while pretending he wasn’t and I had to break his imaginary fourth wall and say “Hi! I’m a person! This is weird!” https://t.co/JnybvVubVh

She started slapped down someone on the right that was actually coming to her defense.

a) it would help if it was funny
b) a former Coast Guard member literally got arrested plotting to kill me last week and Republican journalists have been paying stakeout photographers to take pictures of me going inside my house, maybe read a room
c) the tweet is still creepy!

Posobiec said it was a hamburger joke because of her previous burger comments — which it obviously is.

Back to Caleb Hull’s feed where he sums up the situation:

AOC and the Dems are triggered by someone taking a picture of her COS eating a hamburger after lecturing the country on eating less of them, but they have no issue screaming in the faces of those in the Trump admin until they're forced to leave restaurants.

Weird how that works. https://t.co/9SGlcVRZPn

Welp, I think that this shows that Occasional-Cortex is not only incoherent and inept at public policy, she’s also incredibly thin-skinned. She’s a prime example of the Participation Trophy generation, and now she’s a lawmaker.