What does it mean to be a Democrat who is ‘for’ secure borders but ‘against’ border walls? They say a picture is worth a thousand words.

A meme must be worth even more.

Here is their border strategy summed up in a single photo. 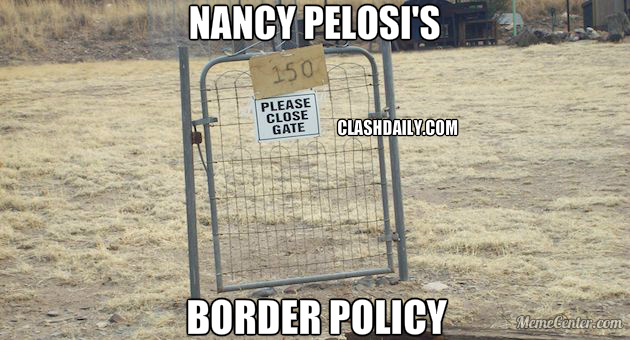 Don’t let them get away with their BS.

1) They say most drugs come through legal border crossings and they want to focus efforts there.

Not true. Most INTERCEPTED drugs are CAUGHT at legal border crossings. That number does not and CANNOT account for how much illegal smuggling of drugs, weapons, or people successfully crosses the undefended border. It is an unknown quantity.

2) People and tech are ‘awesome’ but walls are ‘immoral’. Of course, they would think so. People and tech can’t stop anyone from waltzing over the border, finding an agent and saying ‘olly olly oxen free’ … “we’re claiming asylum in America”. But walls can.

3) If walls are so deeply immoral, why did Nancy agree to put up over a billion dollars to build more?

It’s because it’s never been about a principled stand on policy. It’s all about the politics, and always was.

Let’s hold their feet to the fire, and never let them forget their leaked memo that let the cat out of the bag: